For the first home game this season OU celebrated one of it's favorite players on the ticket stub.  This is the second year that people have voted on their favorite players and the 6 chosen appear on the home game ticket stubs.  I never really think about these things much. I think it's a good idea, but I never really go to the OU website to vote.  It would be hard for me to find just a few players to nominate, much less vote on. They're all special in their own way. No matter the team or sport I'm sure most people have their favorites that never won a lot of post season awards or were recognized for what they did for the team.

Rocky was recruited out of Jenks high school in Tulsa, Oklahoma in 1997. He played one season for John Blake's last team that went 5-6.  They played 3 ranked teams all season 15th ranked Colorado. (I believe this one was broadcast on ESPN in the days before 24/7 football coverage. Why, I have no idea.) 20th ranked Missouri and 7th ranked Texas A&M.  I don't remember the exact quote, but Rocky mentioned the crying in the locker room and the depression of being blanked by A&M 0-29 and the humiliation of giving up 41 points to OSU in a loss. Players like Rocky and Roy Williams confessed that they had a fleeting urge to transfer, but decided to stay with what they had started.


At this point in his career nobody thought he or the team would do much.  Things looked bleak. The program was being surpassed by Nebraska, Kansas State, Colorado, Texas, Texas A&M. Heck, even OSU and Kansas was having more success in those days than OU.Colorado and Nebraska had both won National Championships recently and most of the teams in the new Big XII looked pretty tough.

Things started to pick up in 1999.  The team would finish with a 7-5 record in Bob Stoops first season.  The defense was stout against  13th ranked Texas A&M allowing 6 points in a lop-sided 51-6 win.  OU would hover around the bottom of the AP 25 that year and would lose in the Independence bowl to Mississippi State.  Most of the losses were because of the defense giving up leads in the fourth quarter. That could be a partly because of an offense that couldn't run out the clock and specials teams; not just the defensive deficiencies.  Still some work to go if you're the leader on defense. Nobody on defense wants to lose the game in the fourth quarter and defensive mistakes.


2000 would see the Sooners return to national prominence with an Orange Bowl win over Florida State. OU had the benefit of starting out the season ranked 20th and having three teams ranked above them: Texas, Kansas State and Nebraska were all conference foes that had enjoyed recent successes against OU and possibly took the Sooners too lightly. Beating those three ranked teams helped a lot in the rankings and gave the team immediate and concrete goals to look forward to each week.  In previous seasons the higher ranked opponent might intimidate the team, but not this particular group of guys. They were hungry to show what they could do and looked forward to the opportunity to see how they matched up to the competition.


Here's an bligatory Youtube clip.  This is of Rocky forcing a fumble and the subsequent score in the National Championship game.


Rocky would force the fumble that would lead to a touchdown by Quentin Griffin that effectively sealed the win for OU.  The offense hadn't done much in the red zone that night, but having the ball on the 15 yard line helped a lot. 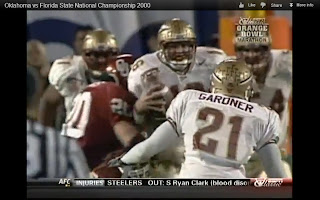 This is the best screen shot I could find of the forced fumble.

Rocky finished his career as a National Champion, Big XII Conference champion, Butkus award finalist (2000) winner(2001) and a finalist for the Nagurski and Bednarik awards and a 3 time first team All-Big XII selection.  He did all this with a fractured bone in his leg and a broken thumb.

Guys like Rocky are the backbone of any team. The tough, smart guy who keeps his head up and keeps at it.  Unfortunately it doesn't always work out for a guy, but hopefully better things are in the horizon for some of these players. Rocky was drafted in the third round by the Tennessee Titans and finished his career in Indianapolis. This particular card was sent over to me by Brian the Play at the Plate Dude. We've traded many times and this was a really nice card he sent over.  He sent over a lot more than this. Hopefully I'll get around to posting up those cards soon, but for now I wanted to give a special post to this card.

I still can't believe that somebody would see a card that they knew I would like and picked it up for me. I'm not so sure I would have done the same thing.

I don't know how the perseverance theme applies to me to personally as a card blogger, but in life I guess we all should be positive and keep at it.

Thanks for the cards, Brian.