Trade with the Conquistador from Miami-My Past Time ... I love it!

I finally got the chance to complete a trade with the one and only Conquistador of Miami, Wicked Ponce DeLeon of South Florida. You all might know him better as Alfredo from the blog My Past Time.. I Love It!!

If you're wondering why I call him Wicked Juan Ponce De leon, it's because of my goofy sketch card that I included with the trade.

I always picture Alfredo as a Spanish conquistador with his many golden refractors and autos at his feet so that's where the idea for the sketch came from.

We had a pretty decent trade set up earlier this year. Yikes! It's already 2011, so I guess it was last year. I can't believe that I'm still this far behind on my blog posts. I really need to work on that.


Anyway, enough with the self-loathing; lets get on with the cards.

First up a few nice Packers cards of some former players: 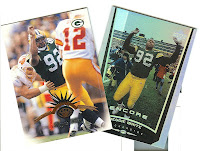 A couple of nice cards of the late Reverend Reggie White. I can't believe that it's been a little over six years since he passed away. Time has been going fast this winter which is good for me as I hate the winter.

Let's go onto some happier thoughts in the form of two nice Met's cards:

and a insert card of David Wright.

A couple of nice Donruss Threads cards of up and coming shortstop Ruben Tejada.

Along with the specific cards he also sent over some random packs.

This card should have stayed in South Florida.

Don't get me wrong, it's a nice card I just think that Alfredo would have liked to keep this one as he's a Dolphins fan.

I'm not certain, but I think Alfredo won 2009 Blogger of the Year last year and I can see why so many people like to trade with him. Thanks again for the cards dude! Hopefully we can trade again sometime.
Posted by Jeremy at 10:16 PM

Labels: my past time....I love it, trade

Thanks for the trade dude... love my card!! Can't wait to see the next one you come up with!!

Thanks Alfredo. I'll think of something cool to send over your way someday.