I received an email from a reader(reader? Who reads this crap?) named Robert who doesn't have his own blog yet. Or at least he didn't when he first contacted me. I'm so far behind on my blog posts he might have gone ahead and started a blog. If he does, and he's reading this I hope he starts one so I can check it out. Like me, he's a Mets fan.

Anyway, he offered up a lot of Oklahoma guys that I listed over on my other blog, which isn't much of a blog. It's just a place for me to write down which random cards that I'm interested in.

It's a McCutchen for the Pittsburgh Pirates. Not Andrew McCutchen, but Daniel McCutchen. You might remember him only from the When They Were Young insert set in this years Topps Baseball. 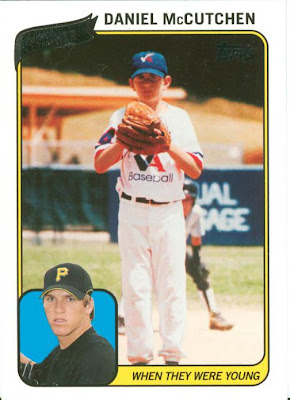 I really don't like these cards that much, but I'm familiar with the player so that's why I'm in to this particular card.

The back explains why I have interest in this guy. 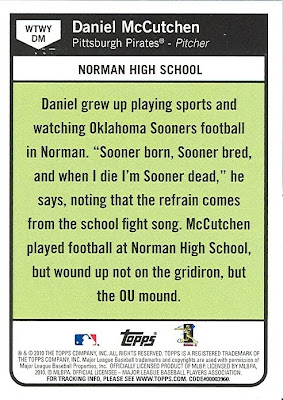 His base card list him as from McKinney, Texas but I know that he went to high school here in Norman and he was a pitcher at OU.

The reason why I know this is because my first "real" photojournalist job was when I made my ill conceived return to college a few years back to work on my masters in journalism. This was about 4 years ago and I had already earned a Bachelors degree in Art. I didn't like where I was financially and thought that by going to school again I could improve my life.

Honestly it wasn't a good idea. I never got my masters. I did learn a lot. Not to sound too cocky, but one of the things that I learned was that I really wasn't that bad at videography or photography and I should just keep doing what I was doing. I kind of wished I would have went at it a little differently, but I don't regret going back to college. It was fun and I really did learn some things. I just didn't get that degree.

My main reason at the time was to try broadcast journalism and get a job for a TV station or something. While at OU I was drawn more to print journalism. I've always held newspapers in high esteem so I gravitated towards the school newspaper. Anytime I find myself with free time or when I go on vacation I always seek out a local paper. No matter the size of the paper I'm always interested in the place that I'm visiting and I feel a little odd if I don't check out the local news.

It was a little bit of an adjustment going back to school after an almost 8 year absence. I didn't have a lot in common with the kids, but I did fit in more than I thought I would. Apparently I don't look as old as I think I do and they didn't realize at first that I was as old as I was so that seemed to help to fit in a little bit.

I think I applied on a Wednesday and by Friday I was covering OU vs TCU in a College World Series Regional held in Norman. They basically handed me a camera and asked me to "get something usable."

So, off I went with no real idea of how to use this equipment. I just wanted to get some cool action shots like in the newspapers or magazines.

For the record the camera was a top of the line DSLR. It was the Canon MarkIIn. Much, much different than my dad's digital Rebel and way different than all my old 35mm SLR's.

It was a bit of a learning curve and I'm not really that happy with most of the photos that I took that night, but I still managed to get something "usable".

So on that note, I want to show off some photos that sort of relate to the Pirates rookie.

This is a wide shot of our ballpark. It's named after L. Dale Mitchel. He played left field for the Indians and Brooklyn Dodgers in the 1940's and 1950's. 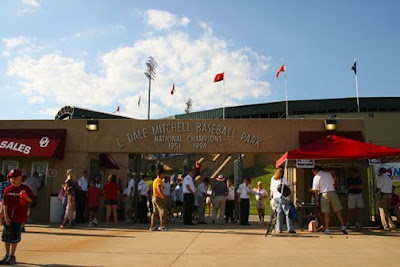 I was pretty excited so I showed up a little early. 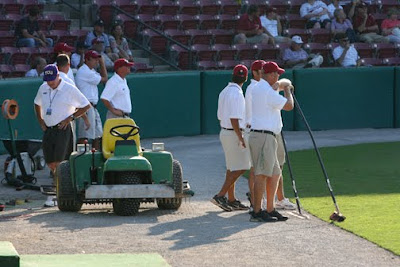 The grounds crew were hanging out. 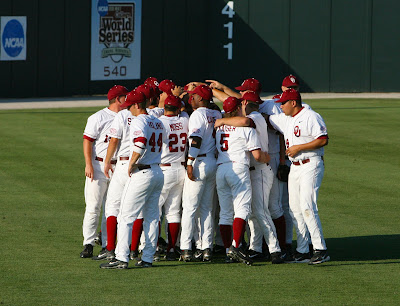 Here are the guys during pregame. 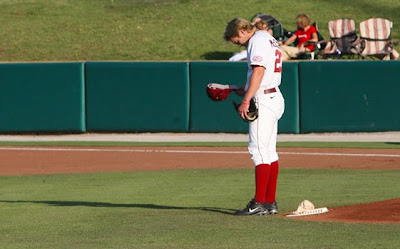 A pregame prayer from McCutchen.

Here is an attempted pickoff. 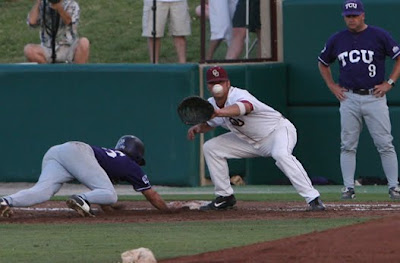 He tried this all night. I don't think he ever picked a guy off in the game. 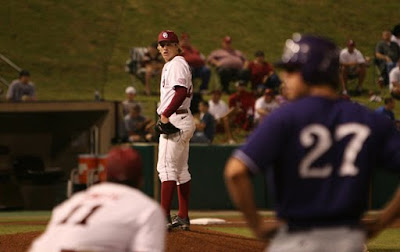 This is a nice shot from later in the night. 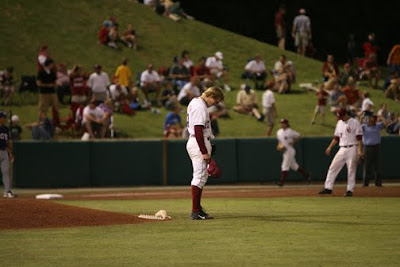 Still praying.
I don't really remember much about the game itself only that it was a rough night for the Sooners as they lost 6-5 with 3 runs scored by TCU in the 9th inning.

Now that I've caught up to him. I'm going to try and keep up with his exploits this year and see how he does. I'm hoping that Daniel has a good year with the Pirates.

Thanks for the card Robert! I'll definitely do more posts on all the cool cards you sent me.

Thanks for reading.
Posted by Jeremy at 12:01 AM