Trade with Behind these Hazel Eyes- Cool Sketch cards

About a month ago,possibly a few months ago I completed a trade with Lonestarr who runs the Behind these Hazel Eyes blog. Since we are both comic book and sketch card fans we decided to make part of the trade a couple of sketch cards. Since this is the highlight of the trade I'm starting off with the two sketch cards.

This is the first time that I have received a sketch card and I loved both of them. The Adrian Peterson card is really good and sort of funny. I've seen that look on AD's face a lot as he looks up at his replay on the jumbo screen. He always seems to staring up at something on the sideline. This has to be from a card or photo, but I can't remember which one. Great stuff.

I also requested the Fantastic Four as it was one of my favorite comics growing up. I still like the FF, but I don't currently read the newer comics. I still go out and pick up the older ones from the '60's and 70's.

I think it would be really cool to start collecting sketch cards done by bloggers. It would be interesting to see what they would come up with.


In addition to the cool sketch cards he sent over some 2008 Masterpieces to help me out with that set.

I picked this nice one of Harmon Killebrew as an example of the Masterpieces card that he sent over.


He also sent over a nice assortment of Topps Magic Football. A couple of former Buckeyes.

Troy Smith won a Heisman and now is with the 49'ers.

.... and Anthony Gonzalez is currently with the Colts.

A cool card of the Cadillac. A really good running back from Auburn who is currently with the Buccaneers.

I've never really gotten excited over checklists before, but I took a liking to the ones in 2009 T206. It's another way to get Mickey into every pack. I didn't buy much of these cards, so needless to say I need some help finishing this up. Thanks to Charley I only have one more to go. 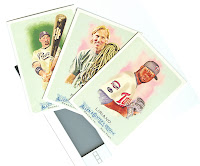 and lastly he knocked out a few A&G cards for me.

Pretty cool trade. Thanks for the cool cards Lonestarr. If any of you like to check out cool art, you should check out his deviantArt page. It's got loads of cool stuff on it.
Posted by Jeremy at 9:45 PM

He did a good job on the F4 card. I'm a F4 fan myself. I haven't bought a comic book though in probably 8 years.

Yeah he did a good job on the FF card. At the very least, there is no way I could have gotten all 4 people in the same little card. If you can't tell, I'm pretty happy with the cards.

Glad you liked the cards. I can still be a little hit-or-miss at times, but those two are some of my better work, methinks. I just grabbed a random pic of AP off google to use as reference; same for the individual Fantastic Four members, though I had much more leeway to do them in a style of my own, which I did for the most part.
Fun Fact: The most characters I've ever fit on a single sketch card is 7, though I'm not sure I'm capable of that anymore.