I normally don't like to be negative on this blog. I have negative tendencies sometimes,but I try to hold them back when I write this blog so that I could keep the blog as positive as possible. Card collecting is a cool hobby and if it's not fun then I don't think it should be your hobby. It's still fun for me, but I haven't had much to write about lately.

I haven't had the time to comment much lately on the blogs either, but I still enjoy reading them. I'm not a very good commenter. I'm either too vague or I leave a long winded comment that should be reserved for it's own post.


Since reading a few posts by Brain at Play at the Plate, I have decided to weigh in on one of the reasons why lately I'm disenchanted with this hobby.

When I first got into blogging/trading I was mostly interested in Mets, some Yankees and I really wanted to get as much 2009 Allen and Ginter that I could get my hands on.

As I mentioned earlier, Brian has posed a few questions about the state of the hobby and blogging in general. I decided to use his post as a jumping off point on a very important (to me) part of card production that I think people haven't complained about enough and that's the use and reuse of the same stock photo for different sets.

I first noticed it when I went Ginter crazy last year when 2009 Ginter came out. I liked all the cards, but I put a little more time and effort in examining the cards of my beloved Mets. One of the cards I pulled was this pedestrian card of pitcher Francisco Rodriquez. You might remember him recently for his semi-Oedipal outburst after one of his losses.

A few weeks later I pulled this card:

I like both cards. I just don't like the recycled photo, but I didn't think much of it because it's from the same year and product (2009 A&G) so I let it go. I mean, it still has a different border and a completely different back so I thought it wasn't a big deal.

Around that same time a trade came in the mailbox. I'm pretty sure it was from Mike at JD's Wild Cardz. (sorry if it was from another blogger, but it's been like a year and a half. Forgive me).

Obviously the same pose. Same lighting. Same last year at the Shea Stadium logo thingy on the hat. Except there is one big difference: this is from a different company Upper Deck.

I'm guessing that the stars get different cards each year, but I haven't done enough research on that. I know that Jose Reyes and David Wright usually have a different photo in the same A&G set and I'm almost sure they have different cards from different companies.


I realize that it's hard to mass produce these cards sets year after year, and even more so when you have like 30 sets a year.

If you're going to do a set why not make a flagship, retro and high end product. Maybe an entry level product like Opening Day or Kickoff and leave it at that.

Flag ship could be inexpensive but with a huge checklist and smallish price with a COMPLETELY NEW PHOTO for the retro set and then a nice card stock for the high end product with.... and wait for it: A COMPLETELY DIFFERENT PHOTO for each card. Don't rehash the same photo year to year and product to product.

I realize as I write this that I haven't done a huge research to find all the examples of Topps and Upper Deck regurgitating the same photos, but I don't have to. You guys have all experienced this much more often than I have. We just all except just like we except miscut cards, missing hits and bad collation because we are all addicted to card collecting and we hope that things will get better. I've got to think that the card companies have a pretty decent library of photos of different guys to include in their sets.

I'm almost certain that I've seen this happen with other players, not just F-Rod. It's a laziness and more importantly a factory system approach to producing sets.

I'll leave you with this: 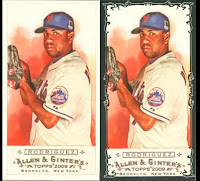 Some gratuitous minis of F-Rod.

The reason why I'm showing these off is that I'm sooo close to finishing off the 2009 mini set and maybe 1/3 of the way from finishing the black bordered mini set. This is the part of the hobby that I've been focusing on these past few months; which is the all the different Allen and Ginter sets.

I couldn't do a rant without at least posting up a few cool cards from my collection.

Thanks for reading and feel free to vent your feelings, comments and frustration with the hobby.
Posted by Jeremy at 2:50 AM

Man I stirred up the hornets nest didn't I. I think you're right though. It's plain laziness to use the same photos. What are they going to do next? Use photoshop and airbrushing? Oh wait...

Ah, this reminds me of another post from some time ago about the constant reusing (at least a dozen times I believe) of a certain Joe Morgan photo on his (mostly Donruss) cards throughout the past decade, in various states of color and cropping. It was sad and brilliant and hilarious at the same time, leaning more toward the latter when I casted a box break the author of the post attended and pulled a card featuring Joe Morgan with that same picture that he hadn't used in his post. Anyway, yeah, it's annoying and I don't like it, but I try to have a sense of humour about it. Although, the one time I did personally come face-to-face with it (in a particularly egregious way), it immediately turned me off of the latter set. It was a Kenji Johjima card from I think 2009 using a the exact same picture as one of his rookie cards, from 2006! That's not cool, topps! Three years apart?! Are you freaking kidding me??? Ahem...

I wrote something similar almost two years ago.

I like your take. And you're not being negative. You're looking at things with a critical eye.

If no one's gonna read your blog, who's gonna read these comments?
But seriously, being new to the card collecting craze, I have not noticed the same photos theme so much as I have noticed the a photo airbrushed to change the uniform to the "new" team. Would not have been near as noticeable if they had airbrushed out the HK tribute patch from Cliff Lee's "Mariners" uniform!

Mark, I think your take on it was as good of one that I could have come up with the exception was apparently this has been going on for looong while.

Dawbones, I never seem to notice the airbrushing much; it always seems to be the similarity in photos and poses that jump out at me. If Topps can make those SP variations then they should be able to do a better job at photoshoping the uniforms better.