My take on the OU/Texas game: Red River Shootout

This is a view from my seat last year.

This Saturday I will be making my annual trek to the Big D' Dallas, Texas to see the football game featuring my Alma Mater The University of Oklahoma playing against the University of Texas. In the past ten seasons or so one or both of the teams have been ranked in the top ten. 6 times in the past 11 years one of the teams has played for a national championship. (2000, 2003, 2004, and 2008 for Oklahoma and 2005 and 2009 for Texas.)

This year's game has lost a little luster with Texas losing at home last week 34-12 to a 2-2 UCLA team. The last time Texas lost at home (2007 Kansas State) was also the last time they lost to OU in the Cotton bowl by a score of 28-21.

For their part OU has a 4-0 record but have only put away one team (Florida State)by a score of 47-17 while winning by a touchdown or less in the other three games(Utah State, Air Force and Cincinnati).

Team stats based on www.ncaafootball.com

Tied for 92nd with 4 fumbles, 3INT and giving away 6 fumbles and 4 INT


Yikes!! Those stats don't bode well for an OU victory. The fact that we are +2 in turnover margin is encouraging though.

Basically what I've seen in a few UT games and 4 OU games is that Texas is lame on offense and pretty good on defense. OU seems to be pretty streaky on offense and have bent (a lot) and not really broken down too much on defense. We can't run and neither can Texas. The only positive spin that I can put on our horrible rushing defense is that two of the 4 teams that we have faced have a run based offense in Utah State and Air Force and hopefully facing an immobile quarterback in Garrett Gilbert will help OU in their pass and run defense. I'm only saying this as running Qb's have always given us trouble. Teeing off on a slow QB is to OU's advantage. (Keeping my fingers crossed)

Last year I had to endure this crap all game long. Waaaay too many Longhorn fans in our section. For the uninitiated this is a "Hook'em Horns" thing. We have our own version, but I didn't think to get a photo of it. It's basically the same thing but upside down.

Apparently about 5 other schools use this same hand gesture. I didn't realize this,but the Hook'em Horns gesture was in response to the widespread popularity of the "Gig'em" gesture at Texas A&M, which was in response to Texas Christian University(TCU) which has a Horned Frog as a mascot. OU has an official hand gesture which is lame. I think a girl came up with ours so out of shame I'm not showing it here.

The series started in 1900 with a Texas win 28-2. It should be noted that the first game was played 7 years before Oklahoma Statehood. Oklahoma was known as Indian Territory at that time.

Currently Texas leads the series 59-40-5. The game has been played in three locations: Norman, Austin and of course the Cotton Bowl.

The Cotton Bowl has been the site for the OU/Texas game since 1929. The game has been sold out since 1941.

Notable trivia about the game.

The Red River is the river that acts as a border through much of the two states.

Former Governor Alfalfa Bill asked the state militia to monitor the border during the Red River Bridge War of 1931.

Seriously, this guy is a nut job. Having said that, if anyone has any Alfalfa Bill Murray cards or memorabilia laying around let me know. Dude's nuts, but still an interesting character.

The game is held at the State Fair of Texas where you will see a ton of people going to the fair as well as 92,000 fans looking to have some corn dogs and fried coke before the game.

If I saw this shirt this year I would change the caption to read," Texas,you're F***n out(of the national championship picture) and "OU you're F****n in (a lot of trouble with your horrible defense.)

My dad was really interested in getting a t-shirt like the one this girl is wearing. She was only interested in telling us inappropriate stories of her being "kidnapped" the night before in some sort of white trash drama. Also, she seemed really bothered by the fact that I had taken her photo. Honestly I could care less.

Here is a shot I found online that shows the 50 yard line division better than I could describe it.

The stadium is split at the 50 yard line, but in recent years I have seen a lot of burnt orange in our section. I have had to sit by 3 UT fans last year taking the space of 1 seat. Sucks. Bench seats are hard to enforce, but I did my best to squeeze those three guys out hoping that they would leave and go squeeze in on their own side, but they never did. I recall them cheering loudly when Bradford went down with an injury. I immediately thought of those three clowns when Colt McCoy went down with an injury in the NC game against Alabama. Karma's a bitch indeed.

Here's a shot of the flyover last year.

And a shot of the OU band taking the field. Sorry, didn't have a chance to get the Texas band.

No matter how hot it gets, or how drunk you get there is absolutely no passing out until halftime.

A mass exodus of OU fans leaving the stadium. This sad sight has been repeated too many times in recent years. 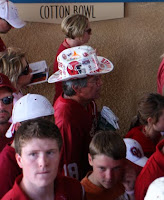 A quick pic of the coolest hat I've seen. If I ever become a hat wearing guy I'm getting one of these. This would go great with one of those Hawaiian themed sports shirts.

I hope everybody likes my quick rundown of the OU/Texas rivalry. Look for me in section 137. I'm going to be the guy in the red shirt. Haha.

Here's a snippet of a DVD detailing the game. It's a bit long, but the even longer version is probably too much for someone who isn't a fan of either team. The Dvd is really nice though if you are into college football.

Hopefully I haven't jinxed myself by writing this pre-game review. Last time I did this we lost. I'll have a good time nonetheless.

Thanks for reading!
Posted by Jeremy at 11:18 AM

Hey Jeremy, nice write up! I had no idea you were an OU fan....and me being a Texas fan....I'm beginning to see a materialization of an annual bet coming along...involving cards....hmmmm.........

Yeah that would be nice. Normally I don't bet, but a small bet with cards might be cool.