My stupidity astounds me sometimes.

Like many people I pride myself on my intelligence. I realize that I'm not the most intelligent person on Earth, but I feel like I'm not the stupidest either.

I do have a tendency to make stupid comments on blog posts. I don't try to offend or be vague, but I feel like I'm not the best at make lucid comments especially on the fly. I don't think I have offended anybody yet so that's good. If the subject is something I feel strongly about I have a tendency to jump right in and comment without thinking.

One subject that gets me excited is Allen and Ginter. Specifically 2009 Allen and Ginter. That was one of the first sets that I tried to complete and after one year I'm still looking for a few select cards. I am also going after the black border and regular minis which has not been as easy as the rest of the set.

About a month ago Duane at Democratic Roadkill posted up a want/trade list on his blog and I thought it was just a trade list. Immediately after posting that I wanted some cards I realized that it wasn't just a trade list. My reading comprehension was lacking that day and I thought he was trading away the Pujols N43. He wasn't trading it away, he was looking for it. After a few emails and some apologies we came up with a trade for some minis and some random 09/10 A&G stuff. He mentioned he had some cool stuff for me, but he didn't mention how much.

As you can tell from the photo, avalanche is the perfect description of the amount of cards that he sent over. Every one of the cards was a new card to me. Literally no doubles at all.

He mentioned having some stuff to send over that might help me out with my quest to finish the regular border and black border minis from 2009 A&G. He sent over a good chunk to get me back on track to finish that set.

I don't have enough time to go over every card, which for me is a good thing. Having a bunch of cards to go through and collate is great. Collate is great is a nice slogan. I wish I had more free time to scan every one of these cards to show them off.

They look really good in a binder don't they? I don't have any one page finished so I just took a quick picture to show off the minis. You can tell there are some holes to be filled, but that's okay. I'll finish this thing off one of these days.

I pulled one Celestial Star of Mark Teixiera out of my box, but I wasn't really into that card. I liked the set, but I knew it would be a hard one to finish. I was just interested in the Johan and Wright cards. He traded me his Johan for my Teixeira! Definitely a good trade for me. Puts me halfway to finishing my goal for this subset.

Here are some of the cool Mets minis he sent over:

A nice Ruben Tejada. Rookie Short stop. The rookie card logo looks nice this year. I think it blends in with the design of these cards better than last years rookie logo. It's still a little weird for a new 21st century logo on a retro design.

... and a couple of Wright minis. Last year David Wright was depicted in a game action shot vertically, this year horizontally. Pretty cool even if the picture on the card is a little small.


I'm not doing the entire set in mini form this year, I'm just looking for a few sports and non-sports minis.

Sacagawea is one of two must haves for the non-sports subjects. The other would be a Leonardo Da Vinci black border card to go with the regular mini that I already pulled.

Our greatest glory is not in never falling, but in getting up every time we do.
Appropriate Confucius quote considering how much falling (and failing) I've done in regards to finishing that black border mini set.

Reading the back of this card reminds me that I've always wanted to read Don Quixote. I always get that mixed up with the Cisco Kid.

The Water Buffalo peeking up from the bottom of the card is funny. I guess they designed it that way to make sure that the yellow star was visible. It looks good.

When I first saw this card I thought of Diplo. I didn't realize until now that the DJ Diplo took his name from the Diplodocus. Apparently he has a huge interest in dinosaurs. 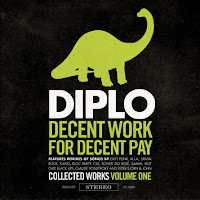 Which would explain this album cover.

If you are so inclined, here is a song of his that is pretty repetitive, but it's catchy. Not one of his best, but I like it.


Duane didn't just send over the Ginter, he had some Mets for me.

I like these Unique cards. They look a little like 2010 Topps at first glance, but if you look a little closer they resemble 2002 Topps Post a little bit more.

Night Owl had a great post about the Post set. I found a two card pack of these recently when I was looking for a screwdriver. The pack was in a kitchen drawer. Pretty cool to find mint cards laying around your house.


The "wave" and the player are glossy, but the background has a matte finish just like in the Topps Post cards. It's a really nice look on these Topps Unique cards especially with the black border. I haven't seen any of these for sale locally. I need to search out some packs.

He sent over two Ticket to Stardom cards. I have had a few bloggers send me a few cards, but not these two. If it's not noticeable from the scan this card is the perforated parallel of the base card. This makes 5 cards of the Mets team set that I own without buying a pack. They're not as people made them out to be, but I'm still not buying. The nice thing about these cards is that Topps put the card number on the back and front. That would make collating the set easier for people chasing the set.

I don't know if this has to be said, but this was a great trade. Thanks again Duane. If anyone is still reading this go check out his blog. He's so close to finishing up 2008 Masterpieces and 2010 A&G. I'm sure he'll help you out with some cards.
Posted by Jeremy at 5:47 PM