I just bought a package of series one Topps at Wal Mart tonight. At first I wasn't really that keen on the team logos on the card, but it sort of grew on me. I still don't like the little Topps Tab in the middle of each card. I think it clutters up the framing of the shots so that they are awkwardly aligned in the card. One such example is of a shot of Phillies catcher Carlos Ruiz. It's a really cool shot of a catcher with his mask off reacting to a play. I can tell that it's a game shot because of the batter on to his left. The obvious problem to me, is that their is so much dead space on the left side of the frame. 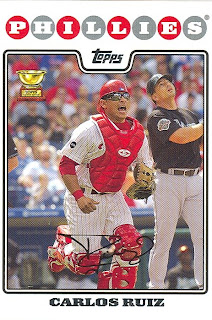 I tried playing with it in photoshop to try and get a better crop of it. I don't know if it works or not, but I think it definitely brings more focus to the catcher and batters' expressions. 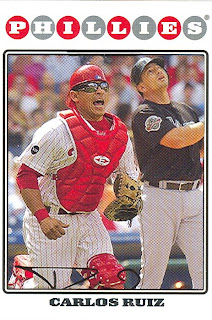 You can probably tell that a few things are missing besides the Topps logo. I kind of messed up the autograph and there's no trophy.

Adding the All-Star trophy seems to clutter up the image too much for me though. 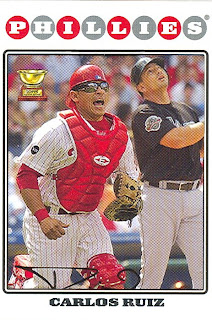 I have a pretty good feeling why the original shot is framed the way it is. I think that in the original shot their was a lot of space on the top, bottom and the left of frame. I'm pretty sure that the way he/she shot it was that the right edge of the frame cut off the batter, but they liked the shot so much they wanted to include it in the set. I think it's a really awesome shot, but I don't like the cropping in the final version. The only problem with my amateur version is that I think it might be too square and not really horizontal or vertical enough for an actual card. It still shows what can come out of some creative cropping though.
Posted by Jeremy at 3:31 AM