I've whined and complained enough about what I'd like to change on some of the cards that I've seen so I thought on this post I'd just post up some shots that I think are really awesome. (I only have a few cards, so the list isn't extensive.) Here is one I liked immediately when I pulled it from the pack. 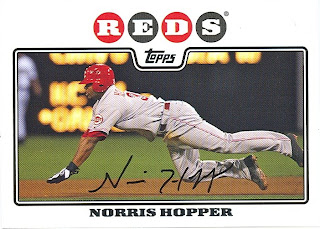 This is good horizontal shot. I like that he's completely off of the ground and in front of an out of focus scoreboard. A really cool night shot. I think it looks pretty good on a black background. I wonder if their is an alternate version of this with a black border?

This is a cool card from Topps 2008. It's one of the Year in Review series featuring a specific play. This one has Fred Lewis from the Giants. I like the off-kilterness of the photo and the fake newspaper headline and zip-a-tone background. It's nifty! 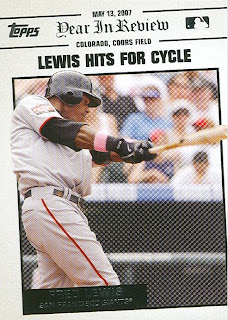 Here is a shot of Roy Oswalt. I like it, but part of me wonders if it would have been better as a vertical. Oh well, the photographer captured a good expression on his face and their is little if no motion blur. 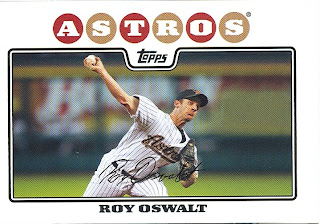 This is a cool shot of Andruw Jones from the Dodgers. I like it because the background looks sort of retro and faded. It even has an American flag in the background. Cool. 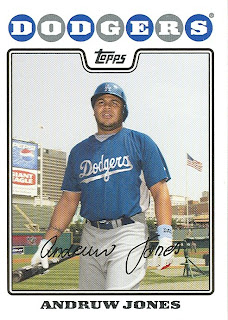 The Hopper card is one of my favorites from the '08 set. It's one of the few (unlike the Oswalt and Jones cards) in which they didn't have to work around that hideous Topps logo overhang.

yeah, the Topps logo really messed up a lot of cool photos in that set.

The Norris Hopper is a great looking card. Nothing better than capturing a midair moment, and the scoreboard background clinches it.