The problem with always critiquing other people's photo and post processing skills is that I had better be as good or better than the people that I'm critiquing, right? Well, I sort of suck at photoshop, but that doesn't stop me from trying. Here is an example or two of some shots that I tried to improve by moving them around and resizing them.

The first example is of the Mets outfielder Moises Alou from the Topps 2008 Series One set. One of the reasons why I want to edit this card is that the legs are cropped at the ankles, which isn't a good place to crop any figure. Also I think bats should be treated with the same respect as a person's limbs. In this card the bat also looks cropped in the wrong place. 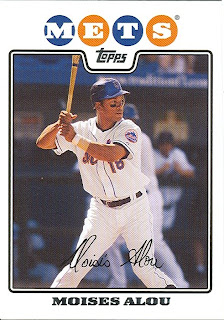 The batter is centered, but is burdened with the Topps Tab directly above Alou's head. By resizing a little and removing the Tab the composition seems to "breathe" more. 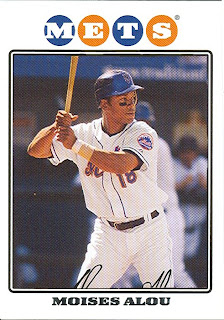 By shifting the foreground figure over to the left makes it look more pleasing to me, but some might feel that their is too much dead space so adding the Topps Tab to the right side makes the whole card look better. Or at least it looks a lot better to me.

Anyone out there thinks they look like total crap? Or really cool? Let me know if I'm on the right track or hopelessly misguided.
Posted by Jeremy at 1:47 PM