#1 - Scoreboards in the Background

Here it is, I finally got around to doing a SitB post. I have mentioned a few of these types of cards in previous posts. It finally occurred to me(after a little
prodding in the comments section) that maybe I should do this as a semi-regular feature.


For reference this the card that originally inspired me to do a post on this subject. 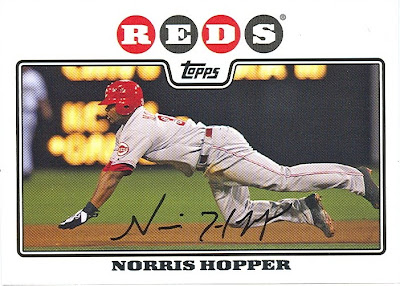 I probably should've done this card for post number one, but I sort of covered it before so I wanted to start with a different card.

The card that I want to do for this post is the number 213 Lance Berkman card from 2006 Upper Deck. This was the year they had the team logo contained in a little black box. UD would go back to the little box (this time a team colored box) in 2009. 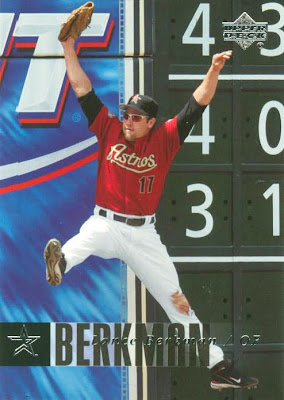 I like this card a lot because not only does it show the scoreboard in the background, but it shows a true action shot. I like any action shot, but especially the ones that show the player from the front or at least their face in the shot.

I also like that Berkman is completely off the ground in this card.

This card also shows the ball in the glove. So technically the ball is also shown in the photo. Or at least I think it is. I think I can see it peeking out of the top of the glove.

The dirt on his knee is a cool feature.

I guess I should figure out why I think these cards are so cool. In this card you can see really how big those numbers are in comparison to the size of the player. Also, take a look at that huge Budlight billboard on the right.

Alright then, this is it for my first official installment of Scoreboards in the Background. I think this idea has been covered on a few other blog, if anybody feels like using this idea for their blog go right ahead. I'd like to see as many examples as possible.

Thanks for reading!
Posted by Jeremy at 12:45 AM

Labels: scoreboards in the background

Your eyes are better than mine. I can't see the ball. Great card.

I worded that sentence wrong. I guess it's sort of by the fingers of the glove and not at the top of the glove. I like it a lot too.