Cool thing about trading with bloggers is that they always keep you in mind when they have a few doubles laying around. I received some cards from Baseball Dad in the mail yesterday. After checking out my trade/want list he mentioned that he had a few cards that I could probably use and he was right.

I'll start with the Allen and Ginter cards that he sent.

I haven't seen a lot of people scanning the non-sports cards recently (or ever). So I thought I'd use that as an excuse to upload some more 2009 Allen and Ginter. maybe there's some people out there who aren't sick of this set yet. 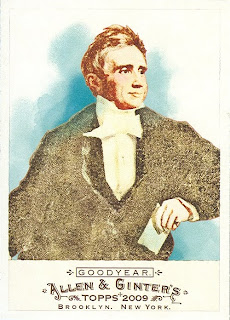 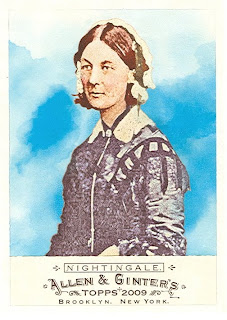 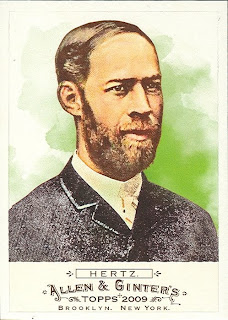 Hertz predicted that electricity can be transmitted through electromagnetic waves. 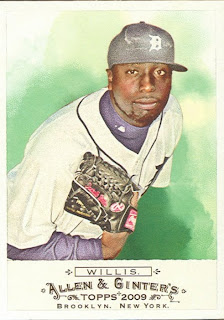 I couldn't help but scan this one too. Dontrelle's pose jumps out of the frame at me.


Baseball Dad also sent me some extra cards to help me along with my Topps series one and two. I'm only going to show off the cool horizontal cards. 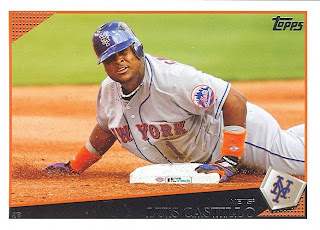 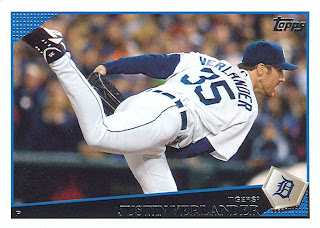 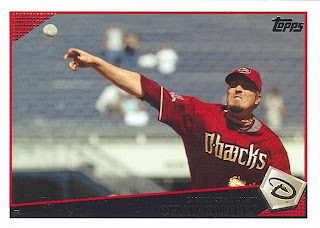 I really love this shot of Chad Qualls. I like that the ball is in the frame and the composition of the card is nice. The empty stadium in the back isn't so hot, but actually the flat colors of the stadium seats are less distracting than if had been a full stadium filled with multi-color spectators. Looking at it closely, I can't help but try to figure out what that is behind him. I think it's a few scattered out of focus fans, but at first it looks like one huge person jumping off of the stadium into the field. I'm pretty sure that isn't it. 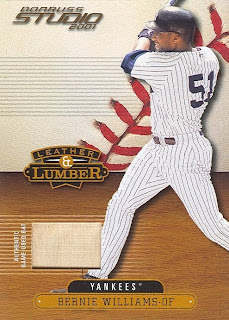 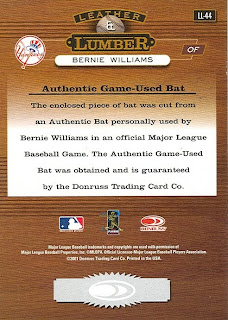 Donruss seems to know how to do a relic the right way. The disclaimer says that it's personally used by the player on the card, so that's nice. 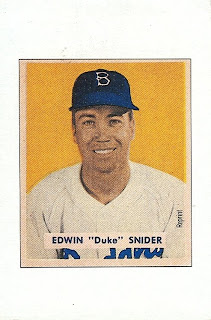 Another cool card he sent over was this reprint of a '49 Bowman Duke Snider card. Really nice for him to send that over. I really like it. The reason for the reprint is that it's an ad to win a that card as well as a few others. I'd like to enter (even though I never win any contests), but the contest expired on or about(!) March 15, 1990. Hmmm, guess I won't be trying that one.

.... and of course the coolest card on my want list. I never thought that anybody would even notice this card. I didn't even know the number for it, so I just listed "David Wright, Topps 2008" on my list. I realize that it's not a rare card, but without listing it by number, would make it hard for people to find in their stack of cards. But anyway, I'm glad he found an extra one for me. 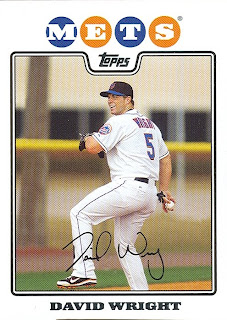 Wow, I guess I should go through all the old checklists and make a huge master list of stuff I want by number. That might be easier for everyone involved. Anyways, I can cross that one off the "list".

Thanks again. You're too generous for all these nice cards.
Posted by Jeremy at 7:17 PM

Glad you received and liked them ! I have a couple more trades to complete,then I have to sit down and work on my want lists and sort my extras.

Yeah find out what else you need and post it up! Maybe I'll have something for you.