I had sort of struggled with the idea of posting this for a while, but I thought since people are more prone to post things about stuff that goes wrong, I thought I'd post up a happy story today about my brush with topps consumer relations department. Haha. I'm writing this post on the influence of cold medicine, so I'll use that as my excuse. Here is the deal:

About a month ago I picked up a jumbo pack or two of Allen and Ginter from Wal Mart. (yeah I know another Ginter post). I did this mainly because I didn't know 12 card jumbo packs existed. I should have known better because the one blaster of A&G I had picked up at Wal Mart had shorted me a mini and a base card.

The cards in question had this weird brown stuff staining the backs of the cards.

At the time I really needed these cards, after having buying a hobby box I already have these cards, but I couldn't do anything with these extras. Trading or selling them online isn't really kosher since nobody would want cards with damaged back in their binder, would they? And I don't really want them in my binder either.

Anyways I messaged them and they replied back quickly telling me to send the cards back to them with a detailed account of what happened.

Due to my procrastination, I waited about two weeks to mail them back to Topps. Considering the time to ship the cards to them and back it was only about a week and a half to get my new cards.


Cool thing is, they also threw in a mini of David Wright. 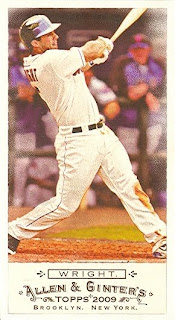 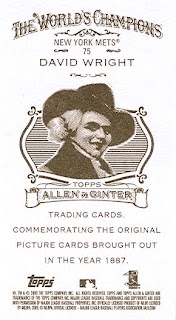 How did they know he was one of my favorites? Thanks again Topps! I'm pretty sure you're not reading this, but thanks anyway.

I just wanted to share a positive account of how a company fixed a problem with their product. I realize it's just base cards, but I was pretty bummed out at the time, but not anymore. I'm going to nap now.
Posted by Jeremy at 11:45 PM

wow, when i read the title, I thought for sure it would be a horror story. Congrats!

yeah thanks. As soon as I wrote it I saw another post about the Cat Osterman relic on someone's blog. That guy really got screwed! I'd be angry if that happened to me.