I had meant to write a post about my series two blaster about a month ago. Work and other things took precedent. Goodwin Champions anyone? Anyway, I decided I'd post up my pulls as well as some cool cards I pulled from some hobby packs. 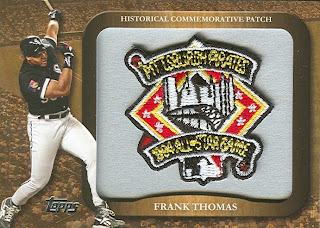 Frank Thomas patch card. I like this one a little less than the Tom Seaver card from the series one blaster, but it's still cool. I'm still not sure what to make of these. They're nice from a player or team collector I guess, but I don't know why you would want to finish this insert. That's probably not the point of these anyway. 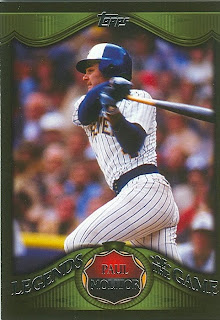 Nice card. Now that I think about it, this may have made it's way over to at Sharpe Since '92. He's collecting this insert set. 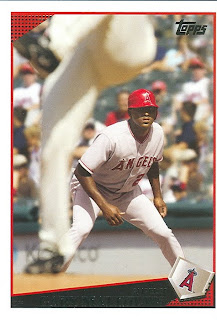 This looks Upper Deckesque to me. Is that a Giants pitcher in the foreground? 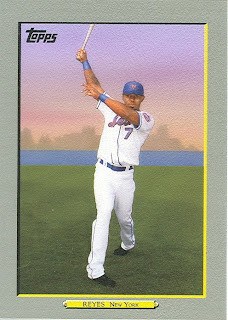 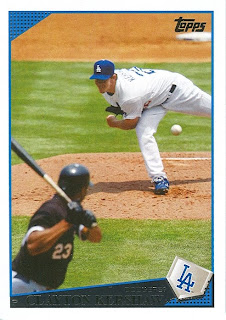 Cool action shot showing the two players involved in the play and also the ball. 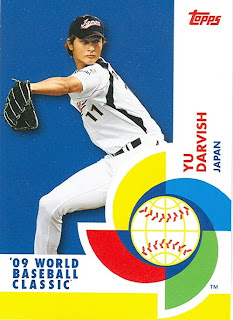 The only WBC card that I actually like. Nice pose and expression. 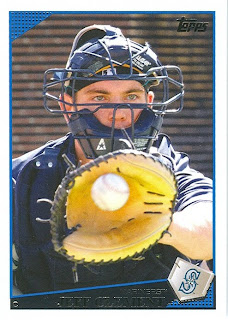 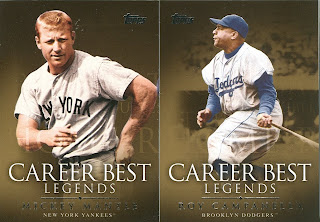 A couple of career best cards. This is a nice set too. The photography is a little better in the "Legends of the Game" because it sometimes shows the fans in the stadium in an action shot or at least it shows a nice colorful posed shot.

Here is one of those colorful posed shots that I pulled from a hobby pack. 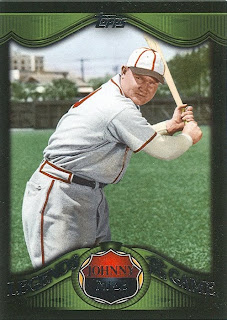 Johnny Mize. The red stripes on his hat really stand out. The out of focus background is nice. You can even make out the telephone lines behind his shoulder.

Here's a career best of Tris Speaker I pulled from a hobby pack. 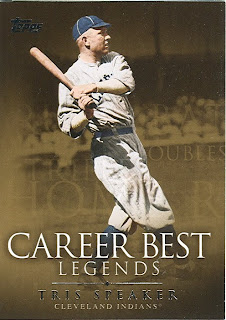 This is the first time that I noticed that their was text with "home run", "Doubles" and "Triples" in the background. The monochromatic background really makes the player stand out, doesn't it?


A few more Turkeys that I needed. 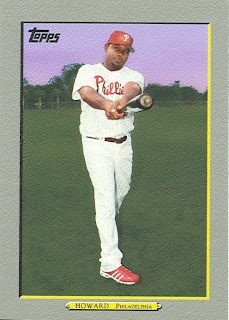 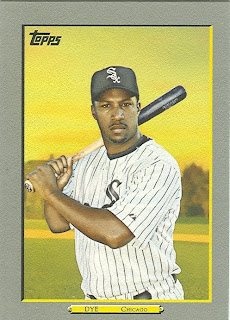 A Jermaine Dye card. All of Dye's cards look cool to me except this one. I wish it was tilted up just a little. I think there's a little too much headroom and it bothers me. I like that it's a tightly cropped shot though. So far, I don't have a lot of Turkey Reds with close shots. That may not be the style that they are going for in these cards. So many of them seem to be far away or full body shots.

The base set cards are nice too. 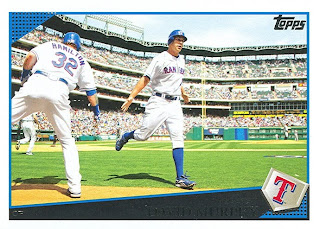 I got the biggest kick out of this one of Daniel Murphy. I had seen this card on Night Owls blog and have coveted it ever since. His was the gold-bordered parallel, which I'm not too fond of, but I really like that it's different take on a game shot. A little too much dead space on the right of the card, but that's cool anyway because it shows the stadium and spectators. Looks like a fairly full stadium that day. 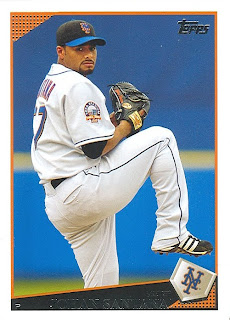 I pulled a bunch of Mets that I needed. Johan is a personal favorite. I love this pose. I might have to do another painting of him. This time I'll have to get it right and portray him as a left handed pitcher.


And then theirs this, a card that I really didn't know what to make of when I saw the edge of it. It was really thin like the other cards. The edges look like the "Legends of the Game" insert, but it was shinier. I picked it up and it sort of reminded me of Allen and Ginter or Topps Mayo because of the small card in the window of a bigger card. 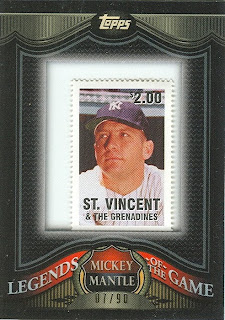 It's a stamp card numbered 07/90 which is cool I guess. I didn't know these existed. I haven't seen anybody blogging about these, so it's new to me! I'm still not sure what "St. Vincent and the Grenadines" is referring to, I guess I'll have to look that one up.

I used to collect stamps sort of, so I can sort of get excited about this. It really doesn't grab me much. At least it's of Mickey Mantle. I'm still pretty new at collecting so Mickey cards are still nice for me. I can understand why it would be tedious to pull his cards simply because they're so many of them inserted into cards these days.

The card's thinner than the Ginter cards and I'm wondering if it will peel apart like my Chad Johnson Mayo relic card. Actually it makes me wonder if all of these cards with the plastic covering will someday peel away at the edges.


This reaffirms that buying random hobby packs is better than a blaster as far as inserts go. I'd rather have a few legends of the game or turkey reds than one patch card.
Posted by Jeremy at 11:23 AM

Nice cards! St. Vincent & Grenadines are an island country in the caribbean.That is a postge stamp issued by said country.They produce a lot of stamps on different subjects hoping to sell to collectors.In this case,they target stamp collectors and baseball collectors!What a gimmick,huh? Anything to make a buck.If you ever want to trade the Tris Speaker, let me know!!

The Tris Speaker is yours. I don't know what I want for it, I'll defer to your instincts for what to send over. I also might still have a Victor Martinez bat relic from this years topps set if I haven't already sent it to you. I'll have to look it up. He's not with the Indians anymore, but at least the card shows him in a Cleveland uniform.