Last weekend on a card buying spree I picked up a few new football products: the 2009 Topps Football series and Topps Kickoff 2009. I've been too busy to post up my pulls so I thought I'd lump the two products together and compare them the best I can. 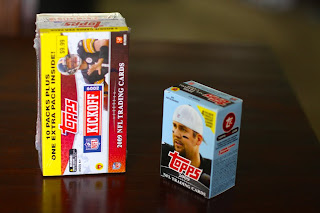 I picked up a cereal box of the flagship football series from Topps and a blaster of Kickoff. They were both the same price at about 9.99 and the cereal box contained 55 cards with 4 exclusive chicle cards while the blaster contained 66 cards from 10 packs plus the one bonus pack.

First off is the Topps Football cereal box.

It has been discussed before by me and by a lot of bloggers much better than what I could do, so I won't go into too much detail with the base set. 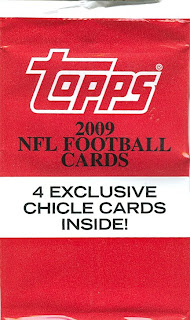 The big draw for me is too see what the advertised "4 Exclusive Chicles" were all about.

The cereal box actually has 5 included in the package. 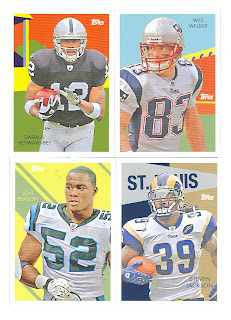 As far as the exclusives go I pulled Heyward-Bey, my personal favorite: Wes Welker, Jon Beason and Stephen Jackson. 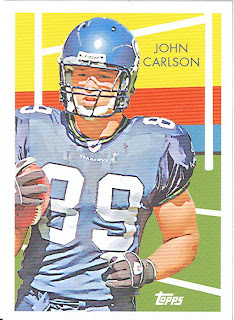 The regular Chicle is of John Carlson. I like the Chicles okay, some of the backgrounds are cool, I especially like the pennant background on the Jackson card. The actual National Chicle series released by Topps is much better looking than the inserts included in the football set probably because it is a dedicated set of cards with the Chicle artwork instead of a hastily done insert set. The reason why I say it's hastily done, is that they look like photos that have been photoshoped to look Chickled out, whereas the National Chicle is actually painted by artists from photos, not just remade photos. 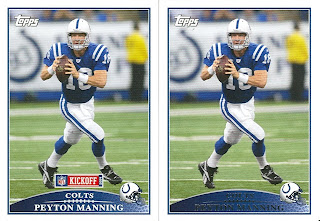 The Kickoff product looks basically like the flagship set, with a "Kickoff 2009" logo above the team and player nameplate. They are also numbered differently on the back. 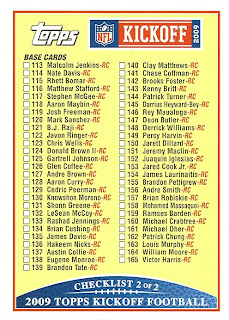 According to the checklist the base set is only 165 cards with 30 Kickoff Komics and 25 Stars of the Game. 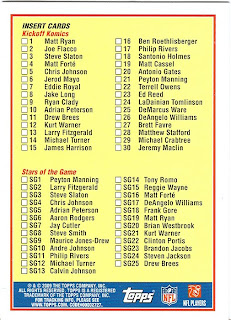 I only pulled the second of two checklist cards, but at least it lets me know the total number of cards to look for. From the looks of things almost a third of the cards are rookie cards. Having not seen the first checklist and being too lazy to look for one online, I'm assuming that it's mostly a rookie and stars sort of thing. 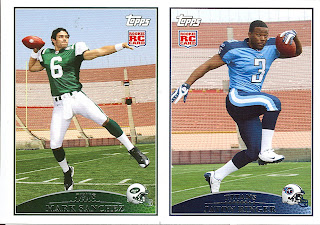 They advertise 2 rookie cards in every pack. Here are two cards that I love. I like the empty stadium posed shots. 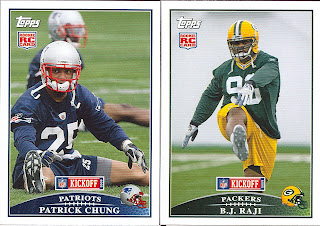 I don't like the training camp warm up stuff much though. 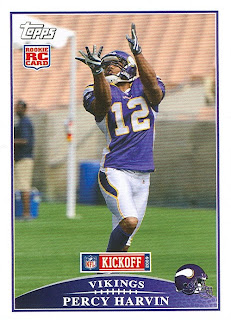 Even though the warm up action shots aren't too bad. 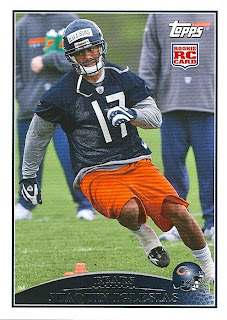 I realize that sometimes with rookies it's necessary, but I wish they would do more of the posed photo instead of a player stretching on the ground. ( I realize that this one is not from the Kickoff set, but I wanted to show one of my favorite former OU players; Juaquin Iglesias.

The Kickoff parallel is numbered to 2009. I don't have a regular card to compare them with, I'm assuming it's the same card with a foil "Kickoff September 10, 2009" stamp on the front with foil serial numbering to 2009 on the back. The Eli card is cool because of that big out of focus "Giants" lettering behind him.

The best thing for me in the Kickoff product is the Comics. 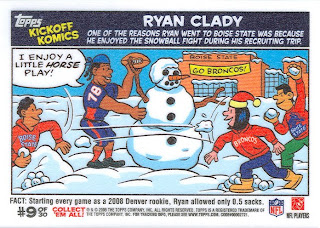 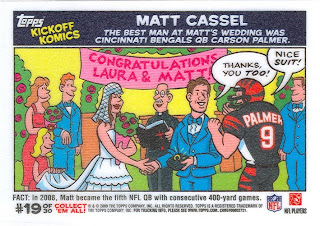 I pulled three of these, but didn't realize it at first because they have a tendency to stick to the back of the card on top of it. 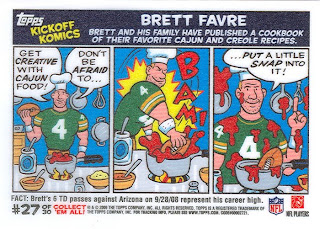 They're printed on a transparent paper, sort of like wax paper. Very thin, but colorful. If you look close enough you can see my scanner mechanism in the background of the Favre card.

Stars of the Game are seeded 1:4 and I pulled two of them. 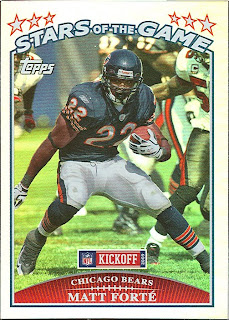 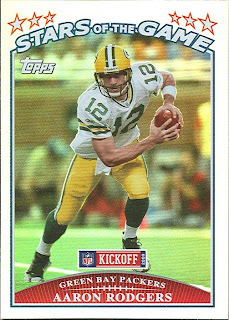 I was lucky to pull a Rodgers Stars of the Game. 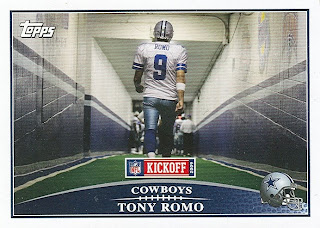 This Romo card is my favorite of the bunch. I can't make out the faded logos on either side of the tunnel. I'd like to find out what they are from.

Kickoff seems like it would be a fun and cheep set to try and finish. The Komics are cool and the base set is not as vast as the flagship product, so I'll probably try to pick up some more of these and try to at least pull a A.D. (Adrian Peterson) or some more Packers.

Thanks for sticking around to the end! I hope it was worth the time to wade through my post.
Posted by Jeremy at 11:52 PM

it is dedicated to cards too

I've seen that blog, it's pretty cool. I like your blog too, thanks for checking mine out.

I've just started collecting this year and the Topps 2009 Kickoff is one of the brands I started. Thanks for reviewing this.

yeah I really like Topps Kickoff too, Brian. It seems like it would be a fun one to collect.