This is another product I've been resisting the urge to buy. Mainly because it seems a little expensive at 3.00 per five cards. I've seen a few cards online and while they don't jump out at me, they still seem pretty decent. I really wanted to buy a few packs or maybe a blaster, but never did because of the price. I hate to sound like a cheapskate, but buying blasters or packs of this stuff might not be the best way to go about it. Maybe a hobby box or retail box down the road would be better for me.

I was really hoping to pull a minor league star from the Oklahoma City or Tulsa teams. I was lucky enough to pull one.


I'm going to show them one at a time. 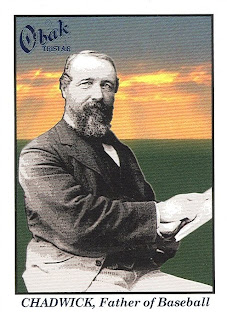 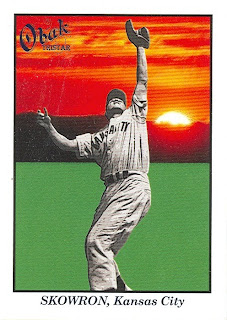 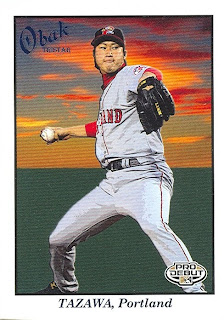 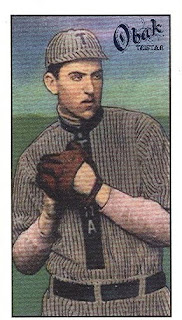 Schmutz, he's listed as Tacoma, N.W.L. I messed up the scan. 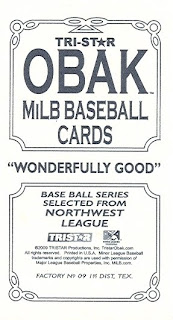 Here's the back. I thought it said "wrongfully good" at first. Like maybe a commentary on smoking or something.

And I saved the best card for last. 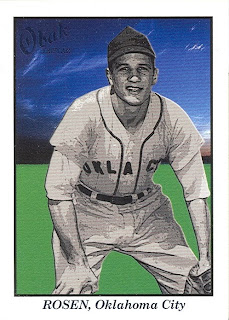 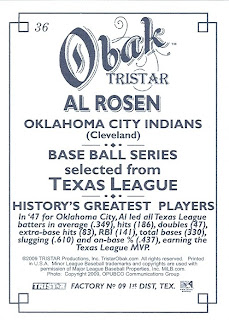 I'm so stoked, I even scanned the back of this card too.


Pretty decent pack of cards. The mini is nice, but the Rosen card really makes the pack. After pulling him it makes me want to buy more. Funny how that works out, doesn't it? The cards seem a little thin, but otherwise pretty decent. I like the back design and the basic theme of the cards.

At least buying only one pack makes for a small blog post.
Posted by Jeremy at 12:57 AM

These cards are intriguing. I agree with you on the value of packs and blasters. I'm beginning to think that buying base sets on ebay is the best option. The per card cost is lower and you get every card.

I haven't looked into base sets online yet. I had thought about it, but even if I don't want to keep the inserts, I still want to pull them. I'm weird like that.