I've been knee deep in work, water and card trades these past few weeks and with all the work and dodging puddles I haven't had a chance to post about the cool trades going on in my life.

Paul from Carl Crawford Cards was cool enough to send some stuff over in trade for a Tampa Bay Price card I pulled from Goodwin Champions.

He sent me a few Mets for my collection. These are from around the time that I stopped collecting, so that's nice to have a bunch of "new" stuff. 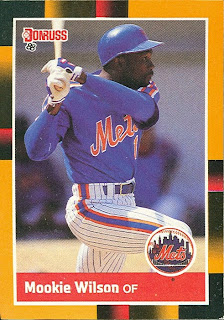 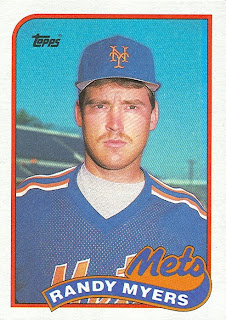 It's funny that these older cards seem so thin compared to the newer cards. It's true, some of the newer cards are kind of thin, but that's only in comparison to some of the thicker card sets. Makes you wonder if we've just become too spoiled. Maybe it's the fact that they've aged, I'm not sure if cardboard becomes weaker with age. 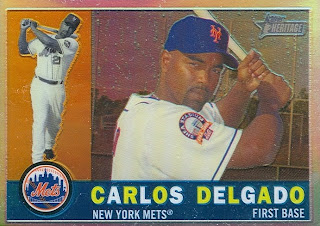 He sent me my first Heritage Chrome card.
It's interesting that the front is all new and shiny and the backs are rough like an older card. 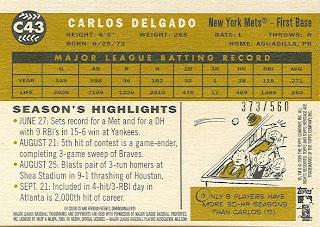 I didn't realize that they were serial numbered. I don't know much about Heritage. The few I have are from trades and the occasional repack. The repacks were from '07 or '08 I think and they don't look as good as these 2009s' do. I might have to pick up a blaster or two of these if I can find any.

He sent me a couple of Yankees cards specifically Derek Jeter. He and Mariano are my two favorite current Yankees.

These cards didn't really come out so good in the scans. 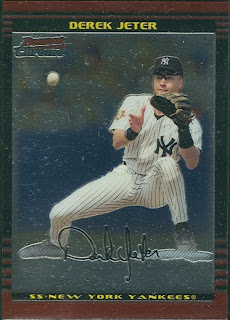 This is a 2002 Bowman Chrome. I like that the ball is captured on the card. Jeter looks pretty young on this one. 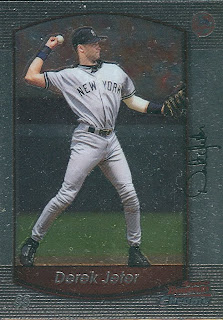 Here's another Jeter 2000 Bowman Chrome.
The player window is pretty nice. I like the curved top and the drop shadow on the right of the window. Bowman cards all seem to have many little horizontal stripes on the front. 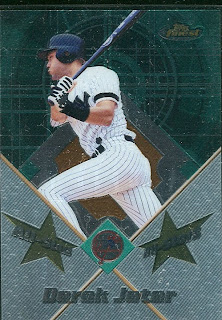 Crazy design behind a pretty nice action shot of Jeter batting. I like the stylized baseball diamond directly behind him with the Yankees logo at home plate.

I mentioned before about how young he looks in these cards. Look at this back. 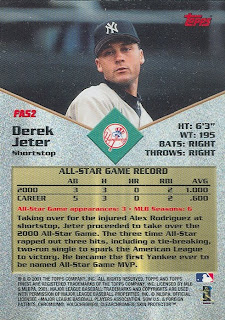 The photos on all these card backs are different than the ones on the front. That's cool. The stat window on this appears to be a gold plate on a rough rock-like background. It's kind of nice. It makes the text stand out.

Thanks again for the cards, I'll keep an eye out for any Carl Crawford cards to send out.
Posted by Jeremy at 9:17 AM