Alright we're in the home stretch of this blaster of Goodwin Champions. I don't think the last three packs can sustain the greatness of the first 9, but we'll see. Hopefully I'll pull a cool mini or a Monet. 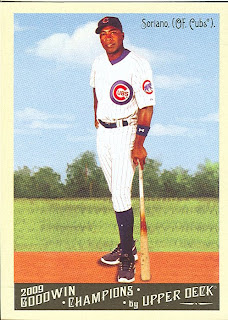 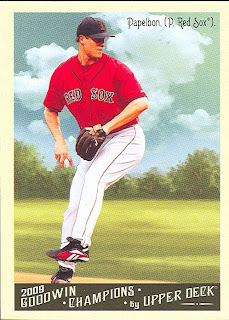 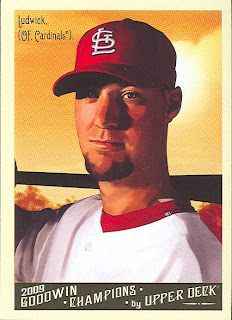 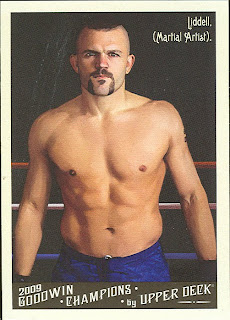 Liddell. Oh cool, my neighbor is included in this years set. This must be him when he was a little younger when he was in better shape. As I write this it's almost 10 PM on a Friday night. The cops should be here soon. I wonder why they didn't mention his loud irritating wife on the card back? I guess they didn't have enough room. 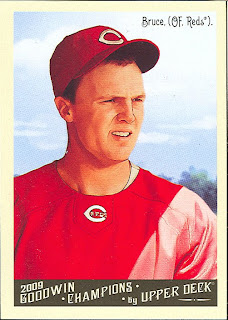 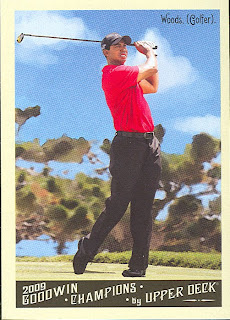 Tiger Woods. Kind of cool. My first Tiger card. No auto, but you can't expect much from a blaster. I already pulled an auto so that's about all I'm getting. 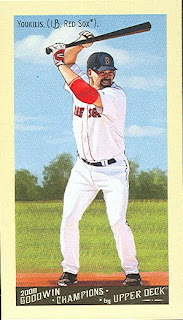 Youkilis mini. I like this guy. I saw him on an episode of "Man VS. Food" a while back. He was taunting the Yankee fan from Brooklyn. 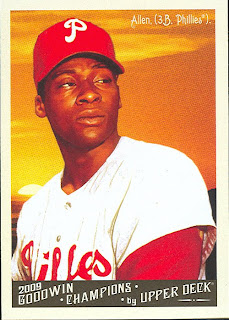 Dick Allen. "Allen won the National League Rookie of the Year Award in 1964. Hit a career high in homers in 1966 and was the AL MVP in 1972. This is a beautiful card. I love the expression on his face, the pose and the golden light and sunset behind him. Looks really nice. 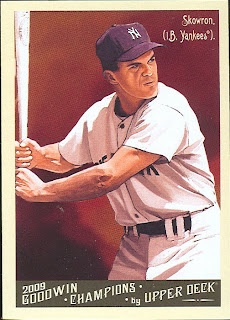 Skowron. I AM SKOWRON!! I WILL SCOWL AT YOU AT THE PLATE! SUBMIT TO ME!!! 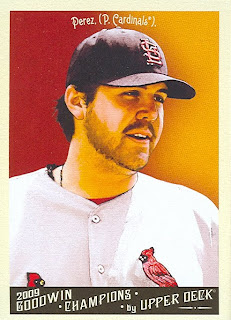 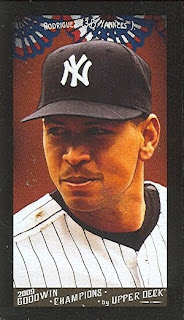 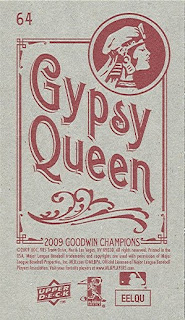 Gypsy Queen back. These look nicer to me than the Bazooka Backs in A&G. I like the profile of the Gypsy Queen and the border. 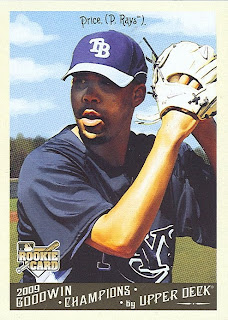 Price. His glove and hat seem overexposed. I'm not sure if it's a good choice to highlight only one part of a player's face like this. Oh well, at least the background sort of matches the light source. The slightly cloudless sky and bright overhead light looks like a mid-day sun. I think this is the only rookie card I pulled. The logo fits the Goodwin design better than A&G. It looks too modern for A&G.

It doesn't seem too hard to finish the set. I've never tried to find "Super Short Prints". Right now it's hard enough for me to finish regular base cards in the sets I'm chasing.

I'm starting to talk myself into trying and finish the base set, but when I see the Citizen's of the day cards like Sitting Bull and it looks like a drawing from a child so I can't really see myself chasing those cards. It still would be nice to pull a Will Rogers and a Claude Monet though.


In retrospect it's kind of funny that they use Monet as an advertisement on the side of their box. Is a 19th century Impressionist that much of a draw to card collectors? One side of the box has a Yankee Auto and the other side has Monet. The front depicts a martial artist and a baseball player with only a little drawing of a butterfly in the corner. You would think the Entomology cards would be the bigger focus on the box.


I like these cards. I don't think it really compares much to Allen and Ginter except they're both retro sets. The Entomology cards are a good idea. These cards seem more like Topps Magic Football than Allen and Ginter. Both Magic and Goodwin have serene backgrounds with trees and clouds and don't seem to be from a game, but in some sort of practice field somewhere. They both have rough backs.

The way the auto appears on the card is similar too. The only difference is that the autos on Goodwin are on card instead of a sticker auto like on Topps Magic. Also I noticed that the football players that I've seen scans of like Adrian Peterson, Matt Ryan and Eli Manning are all shown in their college uniforms instead of their respective NFL teams. That is the whole draw of Topps Magic Football.

The hobby boxes contain 20 packs of 5 cards with an advertised one mini per pack (on average). They also mention on the website that their are 10 Upper Deck Anniversary cards in each hobby box. That equates to like 70 base cards on the low end which means if you're extremely lucky you might still have to get like 3 boxes to finish the base set and any extra minis you might want. I can't imagine anyone being able to finish up every mini variation in the set, but I'm new to collecting, so what do I know? Maybe their are people that can do this.

As far as my breakdown from the blaster:

I'm not sure if I'm going to try and finish this one. If anybody sees anything that they like feel free to contact me and we can set up some sort of trade. Their are a few cards I'd like to keep, but most of them could be traded away.

Thanks for reading!
Posted by Jeremy at 12:07 AM