In honor of the Hall of Fame ceremony this weekend I thought I would do a post on a few hobby packs of 2009 Topps football. I went in the hobby store to find a variety of stuff to buy and came out with this.

Hopefully it won't be as boring as the ceremony.

When I first opened the pack I was immediately taken by the shininess of the cards. I thought the photography was really vibrant and colorful. 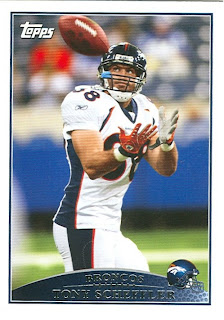 This shot of Scheffler is the first one i pulled and is a perfect example of why I like this set. It's a nice action shot. You can see his eyes and see the ball in the frame. It might not be an actual game action shot, but it works for me. 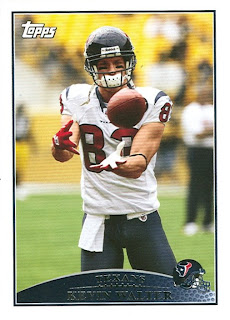 The next card I pulled is a good example of what I hate about these types of mainstream card sets.

You might say, "well it's got action and the ball, the eyes everything that you just said was perfect."

If you look closer you can see that it's a pre-game warm up shot. He's not wearing full pads and there's some dudes wearing warmups and big white shoes in the background. It's just one of those random player shots that doesn't really do anything for me. 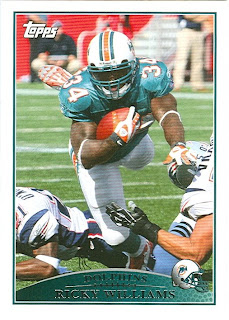 This is a really nice example of a game-action shot of Ricky Williams. I hope to see a lot more of this type of shot in this years set instead of some sort of football version of the Humberto Quintero card. 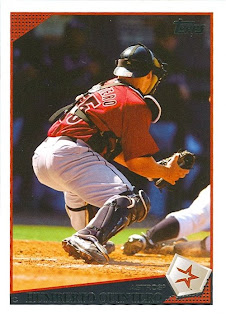 I really like the football design on the bottom of the card that contains the team and player name.

The silver foil really looks nice in contrast to the team colored border surrounding the card and football graphic at the bottom.

The football texture is continued on the back of the card.

In all the cards I pulled, I noticed that they are all lighter at the end of the card containing the card numbers. That should make it a lot easier for people to read. 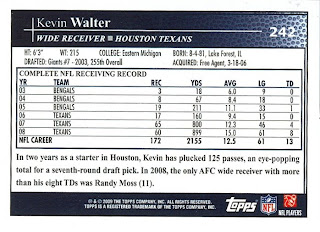 I know a lot of bloggers had trouble seeing the numbers on this years series one and two baseball. You can include me in that group, I'm glad they did this, it'll make collating these cards so much easier. I actually think my eyesight has gotten worse in the last month or so because of trying to collate all those Topps cards.
I picked one of the darker cards that was in the pack to give a good indication of how even a dark card looks relatively light on the area with the number.


As you can see the basic layout is rectangular on the back. A pretty simple design with stats and a little bio of the player on the bottom. That's pretty cool.


Their are a variety of inserts this year. In my two packs I only pulled two different inserts.

The first one was one of the 50 year AFL Flashback insert. I think that's what it is anyway. There are 25 cards in this insert. 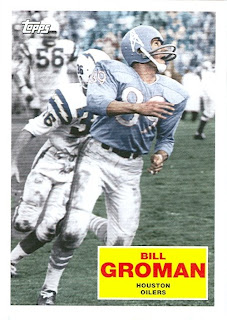 I pulled one of the Oiler's Bill Groman. I'm sorry to say that I don't know this guy.

I like this card. It's a little washed out looking, but it still looks good to me. That could be on the designers or it could just be because of the original photo. I don't know, but it looks a lot better than some sort of "Heritage" design where the colors are cross-processed and the designers add a little blur to make it look more "vintage." I don't really like overdone fake vintage. 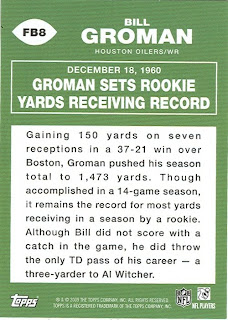 On the back they have a nice description of the player.


Another insert I pulled was the cheerleader thing. 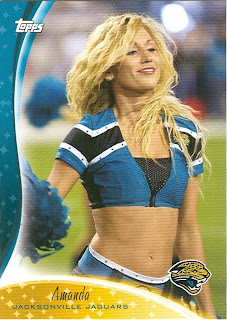 It's nice I guess. I don't mind it too much. The design is a little more "girlie."
Their is a team colored swirl on the left side and the team logo on the bottom right. 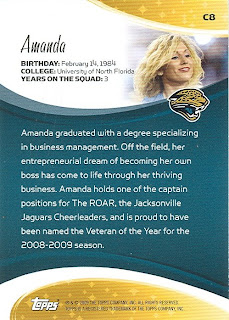 ...and a little bio on the back of the cheerleader containing a "head shot" taken from the photo on the front.
I'd be a little miffed if I pulled too many of these though. I can't imagine really wanting to collect the entire insert set of these cards.

They've also included a Toppstown card. I pulled a gold and a silver one, each in a different pack. 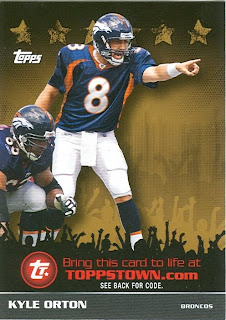 basically the same as the ones from 2009 Topps series one and two.


It looks like a good companion to the '09 baseball that I'm trying to put together.
The series one and two is at like 650 cards and this one is 440 base cards. Doesn't seem too hard to finish. I'm not sure if this is just a series one set and another will follow. If so, it might be a lot harder to finish. I didn't see anything on the packaging to indicate that it's split up into two different series.

I really like the photos in the baseball series so I hope that 2009 Football doesn't disappoint. I have a feeling it will be hard to not try and build the entire set.
I'll probably start out by finding some former OU players and eventually trying to complete the entire set once I see how good the photography is. (hopefully)

In case anybody's still reading, here is my breakdown of the cards I pulled in order.

Thanks for reading, if anybody has any comments or critiques, please let me know.
Posted by Jeremy at 10:35 AM