The past week or so I've read a lot of blogs with bloggers reporting on the new chrome offerings and I've only had one real experience with chrome cards. Besides the few that I've received in trades I bought a pack of 07 Bowman chrome once. That was nice, but a little expensive for a small pack of cards.

I noticed that Walmart had the new chrome out, but I didn't want to pick up chrome versions of the base cards. Or at least that's what it seems to be about. I'm still trying to finish the base Topps set, so I'm not really much interested in chrome. Maybe a chrome team set would be nice. Or maybe I could get lucky and get some chrome cards that I don't have and put them in the binder with the Walmart black outs, Target retro and the regular base cards. I already have a couple of gold parallels in the base set so maybe I can just put these in the binder and have a decent cross section of the different versions of these cards. Hmmm, well maybe not, but it's something to consider.

Anyway, they had something new at Walmart which is to say an older blaster of 2008 Topps Chrome Football. Since I'm a new collector pretty much everything is all new to me and it was 35% off so I had to try it out.

The blaster contains 7 packs with a bonus pack. It also mentioned only having 30 cards. 8 X 4 = 32 not 30 so I had hoped that it would be short some cards because of an auto or something cool.

The first pack that I pulled out of the box was the bonus pack. 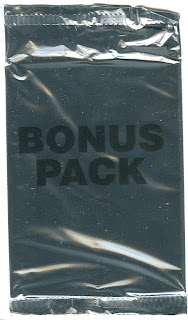 They weren't kidding; It's actually labelled "Bonus Pack". Cool, maybe there will be something really nice inserted inside.

I'm going to do this a little differently (at least for me) and actually post the pack by pack breakdown. 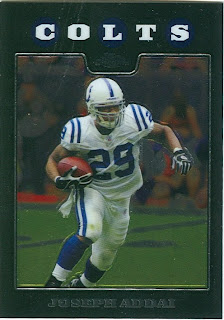 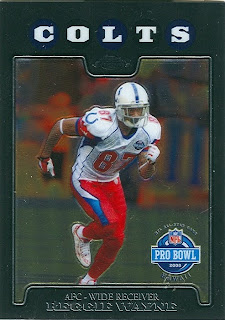 That's cool that their are a few guys that I recognize. Two Colts in a row. Not a big Colts fan, but I like to watch them play especially on offense.

I was confused as to who Caldwell was, I think maybe he has an older brother who also played at Florida. 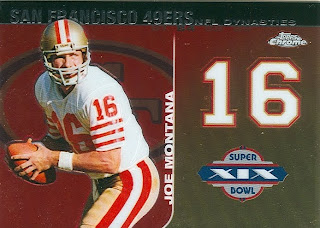 DYNC-JM2 NFL dynasties tribute Joe Montana
I really like the fact that Joe is looking into the sun on this shot. This is a really nice card. 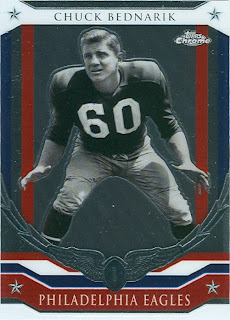 HR-CB Chuck Bednarik
He has an award for the nations best college linebacker.

TC174 Erik Ainge
Once again I'm confused as to who Erik Ainge is. I sort of remember him at Tennessee, but I think his dad might have played basketball or something. 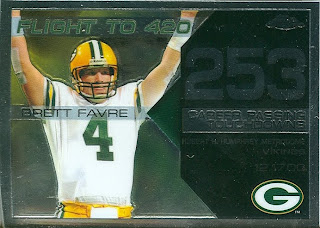 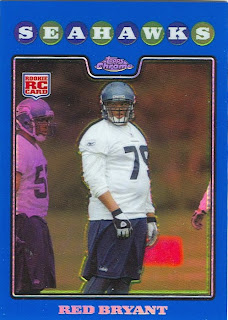 TC234 Red Bryant I'm guessing this is some sort of blue parallel. I'm not sure why they chose a shot of him eyeballing his teammate that way.

I think I might already have the exact same non-chrome version of that Farve card.

It's actually taken me opening up the third pack to realize that the '08 set mirrors the same design as the baseball set that I've complained about here and here.

The design doesn't seem to bother me as much as the baseball cards though, and I'm not sure why, but I think it has to do with the borders in chrome being black instead of white. The black blends in better with the background so that only the guy stands out from the background and the border. 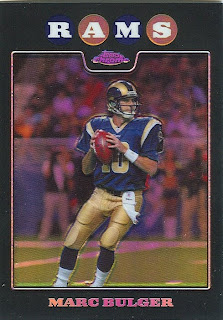 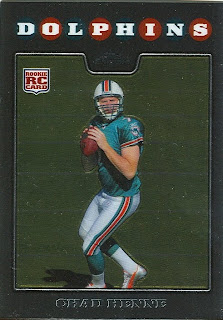 I'm really happy to get a Bulger card. I really liked watching him play especially when Kurt Warner was hurt. I want to say it was in the '02 or '03 season when he got a lot more playing time. Actually I really liked to watch the Rams at that time. They had Warner, Bulger, Tory Holt and of course my favorite Marshall Faulk. They had a few other guys I really liked to watch. When they drafted Stephen Jackson and got rid of Faulk and Mike Martz the offense seemed to loose a lot of what I liked about it. It seemed to be more of a power running game with a typical kind of NFL offense instead of a more finesse offense which was more fun for me to watch.

The Henne card is nice, it looks like a retro card in a way because of the uncluttered background with just the shadow and horizontal yard lines behind him. 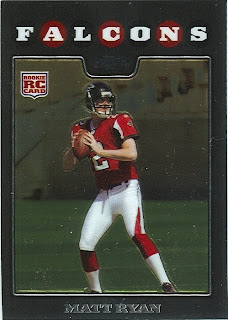 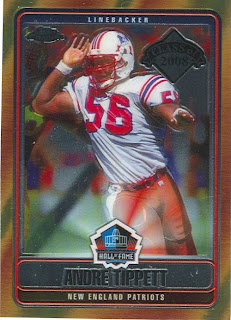 The Tippett card is nice. They put more detail in his leg pads. You probably can't see it in the scan, but it's cool. Trust me. 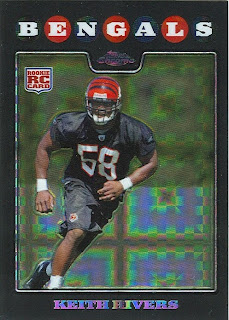 This is one of those weird type of refractor things.
TC252 Keith Rivers 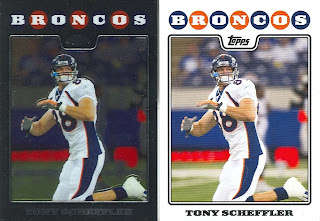 TC101 Tony Scheffler
Here is the one example of what I was talking about earlier. The only cards I have for comparison are these two Scheffler cards. 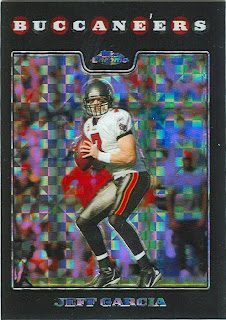 TC17 Jeff Garcia
The Garcia card is nice. Cool pose and it's another one of those weird refractor things.

I would have really liked these Farve cards more like two years ago. I'm really looking forward to seeing him play with A.D. I was hoping that the Packers would have drafted Peterson so that I could see the two of them on the same team and now I have that chance. I really don't like the way Farve does things lately. He seems to have no consideration for the other people on the team that he's playing for and I think it's going to come back and bite him later.

As for the bonus pack it did seem a little thin. 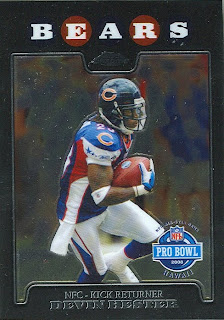 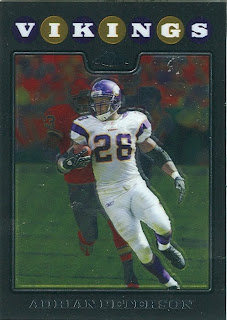 Cool. I'm really glad I finally pulled a Peterson. He's my favorite player. I kind of wish it was a home jersey instead of a road jersey, but oh well it's still a nice card. I really like watching Devin Hester as a kick/punt returner. Two really nice cards to end the box.

Looking at the cards I also like the colored circles behind the team name. I think it looks so much better on black than white.

The cards are also notable thicker than the non-chrome ones. I noticed this when I was scanning the two Scheffler cards. It was a pretty good buy, I like chrome a lot, but I'm not sure if I have the money to shell out for a box or blaster of this stuff to try and complete a set. I have a feeling I'll be buying more chrome to see if I can pull a few players that I like. It would be nice to find some football buddies to trade for some of this stuff and get some more cards that I actually want to keep.
Posted by Jeremy at 12:28 AM

Hey man, I'd love to trade with you! I like the packers and matt ryan and may be able to find some stuff to trade you for cards of those guys!
e-mail me at jakesportlover@gmail.com and lets do some trading!

Okay cool. I'd love to trade, the only problem is that I also like the Pack too, but I can definitely find a few Matt Ryan cards and some doubles of the Packers to send over.

alright, you wanna give me a list of names to look for for ya?