mail day! ( or why I think Night Owl might be The Shadow)

disclaimer: everything you read in this post is true, I might have exaggerated a little at the end, but everything that happened, happened EXACTLY the way I've described it.


I found a few packages waiting for me today in the old mailbox. One was from an ebay purchase and the other was from another blogger that we all know by the name of Night Owl.

First the ebay thing. I recently have gotten in the (bad) habit of checking ebay for an easy, quick way to finish off some sets and inserts that are giving me trouble.

Actually I'd rather trade than buy simply because I'd like to help other people with their collections and of course it's fun to get stuff in the mail. Buying it outright just seems a little too easy sometimes. I guess it's necessary though. I'm trying to collect the entire A&G black border minis and I think ebay is going to account for finishing a majority of that set.

The only problem with trading is that I don't really have enough cards to really help people out that much. I also hate that I don't have enough extra cards to send along with the trade. That still doesn't stop me from pestering people to trade with me though. Sorry in advance everyone!!

Anyway I really wanted this Mickey Mantle card after seeing it on a blog.
It's because of the stadium seating in the background and the upper deck shadows over the spectators gives it a lot of depth. 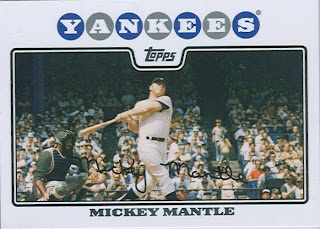 I know that the blogger was a big Yankees fan and wouldn't part with it anyway, so I thought I'd check out ebay.

I "won" it for a very low price, which is cool. I also bid on a few other items from the same seller hoping to get a bunch of different UD Masterpiece cards. Their was this really nice Sandy Koufax card and a great Jackie Robinson card with Jackie sliding into home. I didn't get those, but I still got a few nice cards. 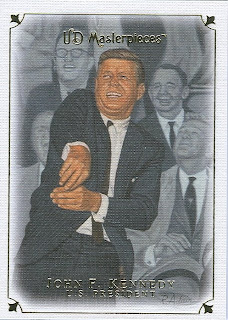 JFK throwing out the first pitch at the new D.C. Stadium. I like the way he looks, but the background not so much. It's a little too cartoony or something for my tastes. When I first saw it, it looked a little like he's in a board of directors meeting or something. Was he throwing out the first pitch in the stands? Maybe they used to do that, I don't know. It seems like he should have been shown with some out of focus ballplayers in the background with the stadium walls in the background or something. Plus I don't believe that dude holding the hat is even looking at the ball. He staring straight into the sun. Idiot.

Anyway I also purchased this one of Derek Jeter. 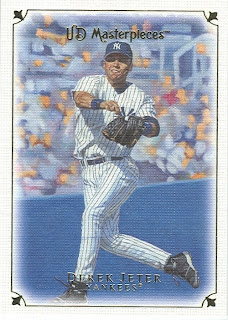 This is a nice action shot I guess.

I'm really thinking about getting back into painting and I think the Mantle card might make a good candidate for a slim horizontal style painting. I don't know about any sort of copyright problems, but hopefully it will be okay.

Anyway after the ebay stuff I decided to see what Night Owl had in store for me.

I had asked for a couple of Topps cards to fill out my series one needs and I immediately noticed those packed together with what seemed to be another card inside. 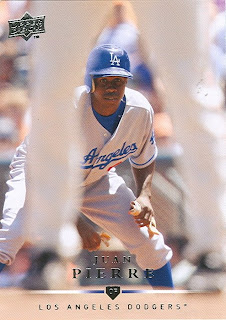 Oh! A really nice Juan Pierre card. I like the framing of Pierre between an anonymous player's legs. First thing that comes to mind is the strip club scene in Beverly Hills Cop. 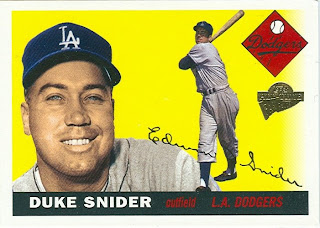 Of course I noticed the bright yellow card of Duke Snider. It was the top card in another package of three. 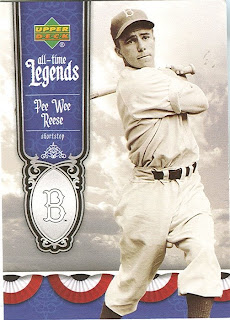 There was Pee Wee Reese card on the back. An UD '06 All-Time Legends insert I guess.

Really cool start to the package. Inside was a Jackie Robinson card. 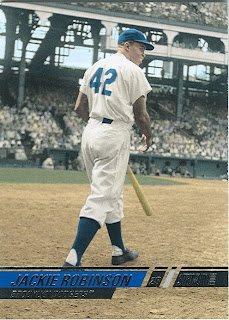 I think it's some sort of Topps Stadium club or something. If you look closely enough, he's looking over his shoulder at us. I know Night Owl likes Jackie Robinson a lot. So do I, that's why it's nice that he was kind enough to send me one of his cards.

Really nice surprises so far in addition to the regular cards. 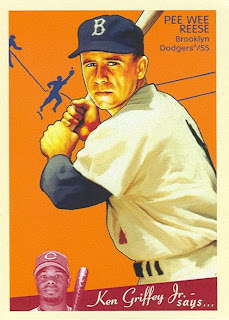 Another 3 pack of cards. On the front is another Pee Wee. This time a Goudey '08. My first Goudey '08. I still don't know the differences between the red and green backs. Pee Wee looks a lot older in this card than he did in the Upper Deck card. 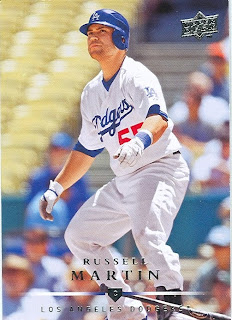 Inside this sleeve on the back was a Russell Martin card. Very nice.

I was really curious to see what would be in the middle of this "pack". 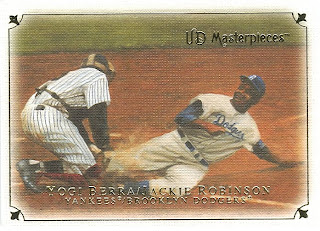 The same Jackie Robinson card I didn't win on Ebay. That's a funny coincidence. I know that we have some of the same tastes in players and teams, but still. I mean, c'mon. That's a little eerie dontcha' think?

Remember when I mentioned earlier wanting to complete the A&G black border set? Yeah I didn't think so. Most of you are probably sleeping through this. Well, it gets a lot more exciting now. I noticed he had another sleeve with some black border minis and another card underneath. 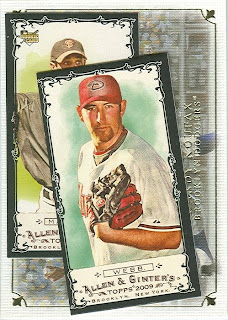 Keep in mind when I saw the minis I was stoked. That's a real nice gesture to send those cards. I still need them too, by the way. I wasn't really expecting people to send those out. They're kind of hard to come by.

Okay this is what was in the sleeve with them. 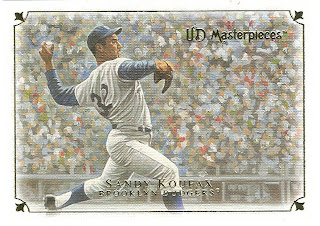 OH MY GOODNESS!!! Are you kidding me! I couldn't believe it. I'm still looking at it now. Now I'm starting to get a little freaked out.

This is the other card that I didn't get on Ebay. I know what you guys are thinking, those cards can be found relatively easy moron. Just look around. That's actually not the point, it's the fact that he's got super powers or something. Maybe he's Santa Claus. Maybe he's the Shadow. hmm. Yes! Except instead of clouding men's minds HE HAS THE POWER TO READ MEN'S MINDS!

Maybe he has operatives all over the world checking on people's want lists. Or maybe he's just clairavoyant. Hmmm, come to think of it, I remember an owl hanging out in the tree in my front yard. Yeah that's it, he has computerized owls tracking peoples card buying habits.

Newsreel Producer: "find out all you can about Charles Foster Kane. Get to the bottom of "rosebud".

Night Owl: "It's his childhood sleigh named rosebud. Hello! Duh. It's a symbol of something he could never buy, his innocence."


But seriously though, thanks for the cards. I really, really liked them.

The Masterpieces are nice. I never noticed before that the painting extends beyond the gold frame. You can see it on Sandy Koufax's feet. Especially his right leg. I don't have a lot of these so I don't have much to compare with, but they all look pretty nice.

Damn, I was just guessing what people liked. That's a much better idea.

I think you're doing just fine as it is without the computerized owls. haha. I really loved the cards. thanks!

I've always thought of the Night Owl as more of a Phantom than The Shadow. Many evenings are passed thinking of him in purple tights, back at Skull Cave, organizing his cards, ever ready to run to the post office to send out a package.

Okay, I don't spend my evenings thinking of Greg in purple tights. It would clash with Dodger blue. Blue tights it is.

Yeah I could see him in a cave like the Phantom,but with the Dodger blue tights. That's funny.

I'm not sure it's safe to use his real name though. I don't want to blow his cover.