Today I received my season tickets for the OU football games. I had received an email last week telling me they were on the way. Really glad that they came today.
This will be my 7th year having season tickets. I'll be starting the season off with a visit to "Jerry World" in Arlington, TX on September 5th to see the OU and BYU game. I have OU/Texas tickets (played in the Cotton Bowl) and I'll be seeing my first OU/Nebraaka game in Lincoln at Memorial Stadium. Should be a fun year of college football. Hopefully we can win do a "Four-Peat" conference championship and maybe win a bowl game for once. Whoo Hoo. Okay maybe winning a bowl game is out of the question. 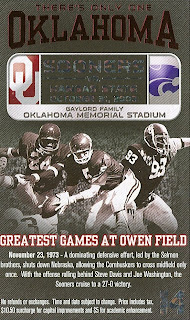 Every year they have a different theme for the tickets and this year they are featuring some of the best games played at Owen Field.

I picked this ticket to upload mainly because what caught my eye was the date: 11/23/1973 would mean that this game was played when I was exactly 8 months old. I guess that's kind of a nifty coincidence. I always seem to notice the 23rd day when it appears in writing. Kind of weird I guess, but that's me.

I also like this one because it highlights one of my favorite players Joe Washington, who currently works in the athletic department. He was a little before my time, but I've seen his highlights many times on dvd and of course, youtube.

Here are a few tickets from the 2001 season. This is the first year that I actively started collecting my game tickets. Yeah, I really like to dork it up hardcore. I'm a pack rat by nature I guess and that applies to my game tickets. 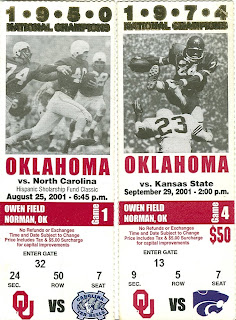 You'll notice the one on the right has the same Joe Washington photo that is used in the montage of the new game ticket.

I really like it a lot mainly because of the hurdle, but also it's nice because the people in the stadium seats seem to go on forever.

This is a game ticket from my first OU/Texas ticket. Oct. 9th 2004
This is a hard ticket to find, but in '04 we started getting them every year.

At some point I started to write my own little game recaps on the back of the ticket.

I like how the first sentence is "Drinking of intoxicating liquors at this contest is prohibited and violators will be ejected without refund."

I wonder how many tickets have this rider included on the back? None of my other tickets ever had that wording.

This was Adrian Peterson's first OU/Texas game. According to my unofficial stats on the back we won 12-0, it was the first time Texas had been shut out in 24 years and also A.D. ran for 225 yards.

I've always wondered if I was the only person who wrote things on the back of the tickets. It seems a little childish, but during the summer when things are slow it's kind of nice to go back and see what I thought was important at the time.

Most of the time I just wrote whatever was important to me at the time of the game not so much what happened in the game itself. 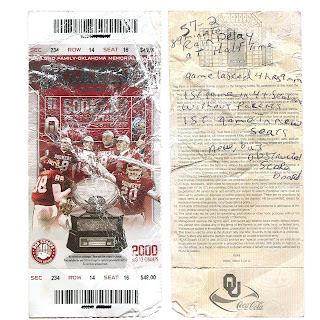 According to my recap we won 57-2. There was an 89 minute rain delay at halftime with the game lasting 4 hrs. 9 min. You can probably tell that from the condition of the ticket. Doesn't seem that long though when half of it is spent in line waiting for overpriced watered down coke and pizza.

It was my first game in my new seats and the day the new scoreboard was unveiled. Problem is, part of the scoreboard is obstructed by the stadium lights. Maybe we should have kept the old seats. This was the first time in several years I had to go to a game alone, my dad wasn't up to coming to this game and I couldn't find anyone to go with me. Hopefully he'll feel up to making it out to all the games this year and we can experience the rain delay together.
Posted by Jeremy at 10:36 AM

Thanks David! It's interesting to see how much they've changed over just a few years.

I recently came across your blog and have been reading along. I thought I would leave my first comment. I don't know what to say except that I have enjoyed reading. Nice blog. I will keep visiting this blog very often.