I thought I'd break up all the painting posts with something about my first football assignment of this fall. I'm not sure if this counts as fall yet, it was 92 degrees outside Friday evening so I'm still thinking it's summertime.

Anyway, I was in Moore, OK (home of Toby Keith) today to take photos of the Broken Arrow Tigers in a scrimmage at Southmoore high school. Actually the street facing the stadium and high school has been renamed Toby Keith Avenue. Crazy! I really haven't listened to any of his music and actually I wish he'd wear a shirt with some sleeves occasionally. Especially when he's on the OU sidelines.

Back to the game. 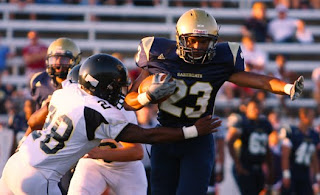 This is a running back from South Moore HS doin' his version of the Heisman stiff arm against a DB from Broken Arrow. (The other DB is out of frame.) 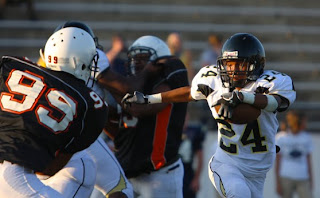 Another running back shot, this time a kid from Broken Arrow. The writer/sports editor didn't have a roster on hand so I have no idea who he is. That's fine with me though. I love these types of assignments. I only have to show up, take, edit and upload a few photos and let other people write the recap. I like writing, but I suck at it. Just writing captions sometimes is a chore for me. 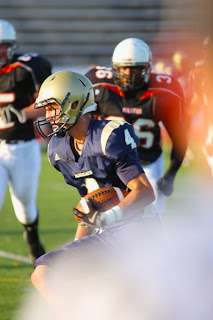 Here is a typical shot from my memory card. I don't know how many times a coach, assistant coach, referee, TV cameraman or TV microphone guy gets in my way during the season. I have so many shots of the backs of people's heads and shoulders its ridiculous. Also, maybe I should crop out some of the dead space on the top of the photo. 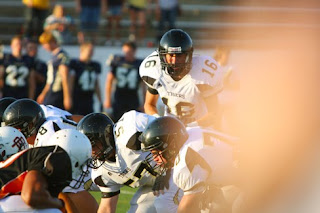 I kind of like these shots though. Last year I was into collages and I made a few collages out of shots that wouldn't be printable.

Here are a few of them.

The first is from a Southmoore VS Westmoore football game. Same stadium as the above photos. 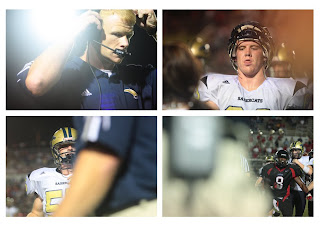 You might remember the kid from the lower right photo from this post
If I remember right the he had tried to scramble on fourth down for a first down and after much deliberation they gave it to him. This is a perfect example of the out of focus people getting in my way except for the first shot. That's just a stadium light causing a problem. I think this collage is kind of dramatic though. Starting with a head coach pulling off his headset, ending with the opposing QB celebrating. Okay maybe not.

Here is a shot from a Edmond Sante Fe and Edmond Memorial. I really don't have much love for the Edmond schools, especially Sante Fe. The fans and some of the players seem to be too cocky. Edmond North and Memorial not so much, they seem a little more down to earth. For all of you that aren't familiar with the Oklahoma City metro area, Edmond is north of OKC and is pretty much a rich person's suburb. 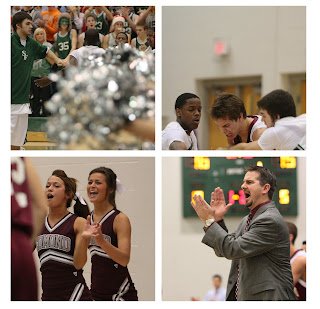 The assignment was to get some shots of the coach. The lower right was the photo that ran, the others were just interesting mistakes that I put together. The first shot I was just trying to get some shots of the guys in the pregame introductions, but the cheerleaders raised their pom-poms just at the right moment to screw me up. I had never shot a basketball game before so just trying to keep up with the action was pretty hard, hence the second shot. It's really badly composed, but I like it for some reason. I guess it's because it shows the facial expressions of the struggle without showing the actual struggle of getting/retaining possession of the ball.


So anyway, that's it for me tonight. That's all I've got, unless you want to see some random out of focus shots of the ground of the back or some linebacker.

Thanks for reading.
Posted by Jeremy at 1:13 AM