I have seen a lot of this on the blogs the past week so I really wanted to try and get a blaster or a few packs to see for myself what it looks like. I found a blaster at Target which is kind of surprising in that it seems like everybody else gets new releases earlier than we do here in Oklahoma.

I saw the Claude Monet on the side of the box and I didn't even hesitate. I'm a big fan of painters and painting, so I had to see if I could pull a painter or some literary hero of mine. I haven't looked at the checklist yet, but I've seen a lot of different stuff online so far. The only card I really absolutely have to have is the Adrian Peterson card. The Jose Reyes card looks pretty awesome to though. The mix of sports and non-sports stars really intrigues me. 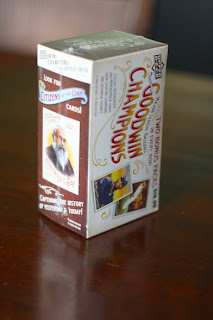 Needless to say that in my excitement that I didn't notice the actual breakdown of the box until I got home. For what it's worth, the blaster includes 12 packs with 4 cards per pack. It's one of those "TWO BONUS PACKS in Every Box" type of thing. I hadn't seen that before. Only the "One Bonus Pack in every box".


Anyway on with the Goodwin!!!

I'm going to list and scan every card that I get from the blaster. I don't know why I'm doing this. Mainly because I've never done it before. Maybe it will help draw out the experience a little more.


It didn't dawn on me until I actually opened the first pack that 4 cards isn't really much. 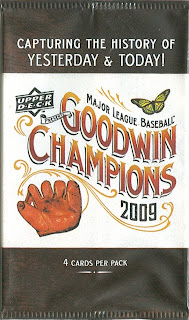 Here is the pack in case any one is interested. 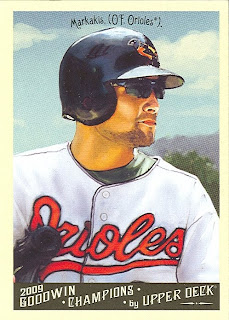 Nick Markakis. Beard looks a little fake to me.I like the background, but the card does feel a little flimsy. 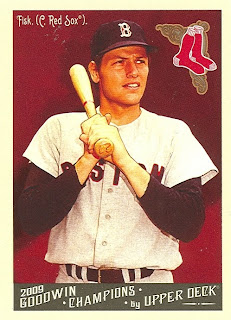 Carlton Fisk. Nice. I like the old school red sox in the corner. Nice pose. Looks more life like than the Markakis card. 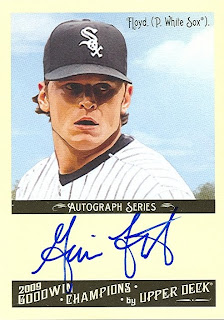 Alright!! On card auto of Gavin Floyd. Pretty neat, the autos' on Ginter are underneath that plastic stuff, so this is more impressive to me. I can see the heavy and lighter spots in the ink where he pressed harder or lighter when he was signing. Kind of cool.The face doesn't look very life like. This card looks half painted/half photo, which it is, but not in a good way. 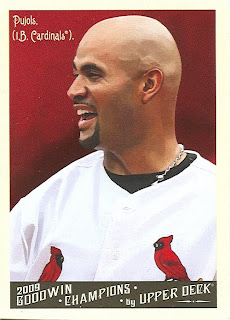 Pujols! I like it. Nice candid card. This card reminds me of the Topps Magic Football cards. They seem to look better in scans than in real life and I'm not sure why.


Okay, On with pack two. 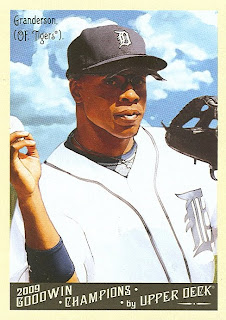 Curtis Granderson. Fake baseball playing pose. Clouds. Looking straight at the camera. Hmmm. Seems like a Goodwin theme is to have clouds and weird poses. In this card the painterly effect looks really good, especially on his face. 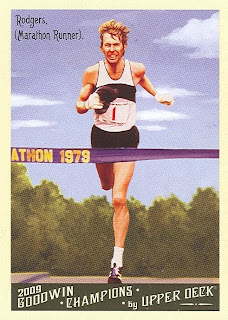 Bill Rodgers. Looks a little like Dana Carvey. Interesting expression. Still a bucolic background. I don't think the New York or Boston Marathons took place in West Virginia or upstate New York. Maybe they swung by the inner part of Central Park in this card. 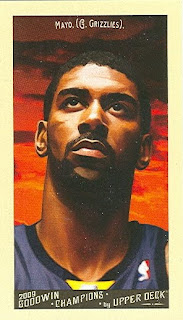 O.J. Mayo mini. Under a Blood Red Sky. Looking up into the off camera soft box. Seems a little like a revelation-esque card. As a rookie averaged 18.5 points a game. 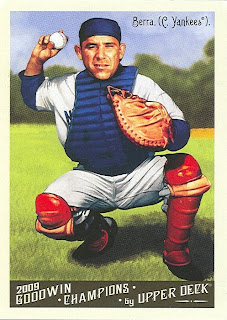 Yogi Berra. He looks a little like a monkey here. I think it's because he has no neck. I like the pose, but again they depict him in a field. He was selected to the all star game for 15 straight seasons: 1948-1962. Nice facts on the back of all these cards. I was surprised that he wasn't smiling in this card. 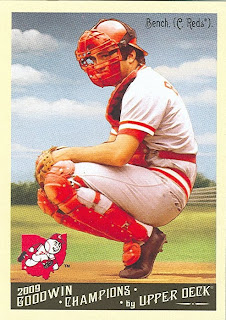 WHOOO HOOO!!! This is another card I saw that I wanted. Nice. Johnny Bench is from Oklahoma and I think this is the only card of him I still own. The others were thrown out in the late '80's or are still hidden somewhere in my parent's attic.

I also like the logo in this one. Actually any card with a retro logo in it is the best. My friend Huddleston looks just like him. Odd. I couldn't tell from other blogger's scans, but he's looking forlornly off into the distance. Kind of an odd pose too. 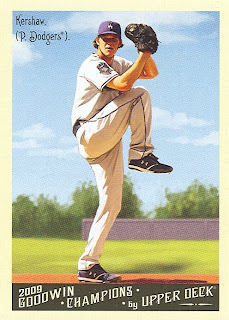 Kershaw in a cool pitching pose. This card shows some sort of edifice behind him in the field. A little different 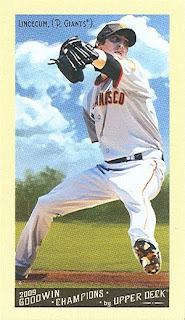 Lincecum mini. One of my favorite players. The absence of a right arm bothers me a little. I love the clouds and trees in this card. Nice use of the rule of thirds. 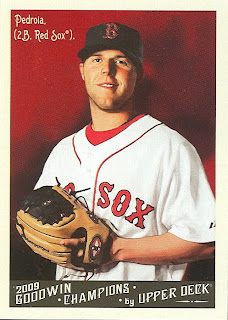 Nice start so far. Pulled a few good ones. I think the weirdness of the backgrounds is a plus to me. Its different, which isn't always bad. The use of the "real" backgrounds in the game action Ginter cards are are almost like parallels of base Topps cards with the realistic backgrounds. Having all the players in an outdoor setting sort of makes sense; most sports are played
outdoors.

It seems to me like a good companion to Allen and Ginter. I don't know if it would replace it or even outdo it simply because it doesn't look as professionally done as Ginter.

Next few packs coming up soon.
Posted by Jeremy at 10:35 AM

Poor Yogi, 84 years old and still being compared to a monkey! I know, he's crying all the way to the bank. BTW I do like your artist's-eye take on cards.

Thanks for the comment. I think maybe it's Yogi's ears that's giving me a monkey feeling. I like all the cards I've pulled, but I like to critique the designs a lot.