Earlier today a friend of mine, David sent me a text alerting me to a protest organized by the Westboro Babtist Church. I wasn't too familiar with this organization, but I did have a feeling it was the idiots who like to protest funerals of fallen soldiers. Unfortunately I was right.

They also like to engage in other tacky protests like showing up at funerals of people who have died of AIDS or who have died as a result of anti- gay attacks or simply homosexual people who have died. I don't know why they refer to themselves as a church. I cannot comprehend why they would want to bring more sorrow upon people who are going through the loss of a loved one. No matter what those people who have died for or died from shouldn't really be a place to protest. I'm still trying to figure out the reasoning of these people.


I'm sorry that I can't write an eloquent or even somewhat grammatical post about the church. I'm not exactly angry at them, I just really don't get it.

Anyway, my friend mentioned that they were going to be at the Hillel Jewish Student center at the OU campus. It's not far from where I work so I made it a point to stop by.

They were probably outnumbered 20-1 at least. When I took this shot their were probably 30 or so people behind me and another 20 on the other corner.

This is a panoramic shot. The Westboro people are on the right. Actually it's just about 20 or so of them, the rest surrounding them are the anti-Westboro protesters. I didn't realize it at the time, but my friend David is right there next to them holding the not very well made cardboard signs. 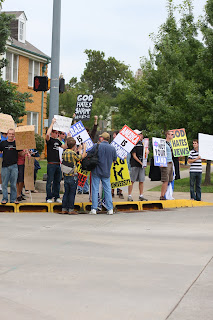 I guess today they decided to have a problem with Jewish people, Obama and "shrimp eaters". Again, I'm dumbfounded trying to figure out what that means. 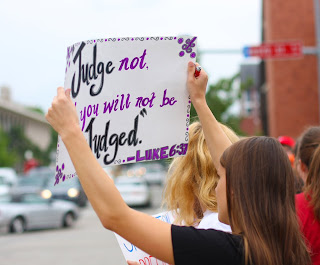 I'm pretty sure she had writing on both sides of the sign, but I'm not sure. She was pretty cute though anyway. 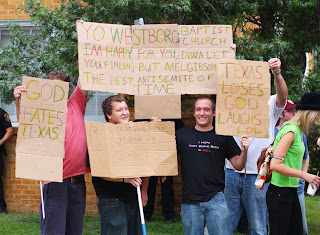 David and his brother tried turning it into an anti-Texas Longhorn rally. 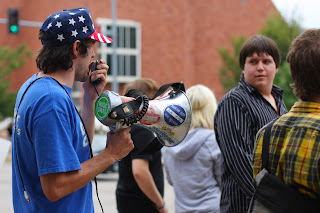 I couldn't hear a world this guy was saying. Apparently the guy on the right couldn't either. For a while I thought he was one of "them". 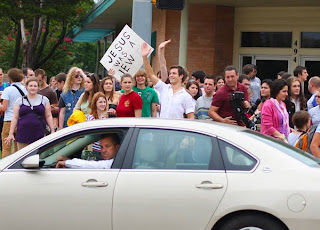 I'm not much of a political person, so I never really feel intelligent enough on the issues, but this seems like such backwards way of protesting the war. They want to make it a personal vendetta against the actual soldiers, not the government. 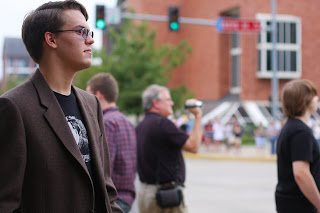 I was really pleased with the turnout by the OU students. I saw a lot of newspaper people that I recognized and a noticed a lot of J-students with press passes interviewing people and taking photos, which is great. I look forward to reading about it in Monday's school paper. 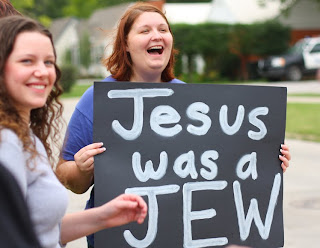 I didn't get their early enough to take many shots of the Westboro protesters, but I got this shot of them leaving in their minivan. 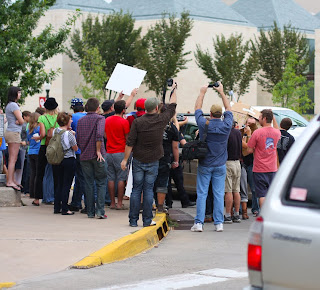 I wonder if they realize that only in this country that they can go out and protest this way? If they don't like the USA's involvement in the war shouldn't they figure out a way to find someplace else to live? Does that sound too close-minded and hickish? Apparently they are on an OKC metro area hate tour today. I hope their are enough people protesting them so they don't stay long.

Anybody out there have any stories on this group?
Posted by Jeremy at 8:39 PM

Sorry I just had to leave this comment, in the second photo when you enlarge it, you can see a guy with a sign saying "I'm with stupid" pointing the westboro people. I Lol'd at that one. very funny.

I have no idea, but you are right - she is cute. I guess cute trumps stupid. Or was she on the non-stupid side? I got confused.

Don't worry I don't think I explained it very well, but she was one of the non-stupid ones. She was protesting the protesters if that makes any sense.