I promised in my last post that I would try to blog about my trip to Texas to see OU and BYU play at the new Dallas Cowboys Stadium in Arlington. I remembered to bring my camera this time so I'll have a decent amount of photos to share. I won't bore everybody and try to keep it relatively brief. 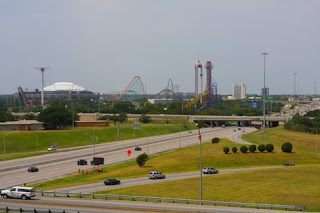 This is the view from our hotel room. Mapquest says that the stadium is 22 miles away, but you can see it from our room. Or at least I think that is the stadium. I'm not sure, We stayed really close to Six Flags so at this point I'm thinking that it might be some sort of attraction instead of a football stadium. We took the shuttle over for a ten minute ride to the park. 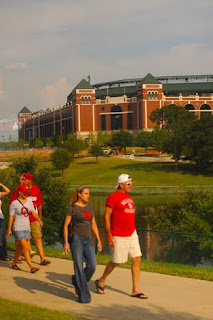 Texas Ranger stadium is just across the pond from the new Cowboy Stadium. I didn't have a chance to go to a game. If I knew we were that close I might've tried to get some tickets to see a game. I still haven't been to a MLB game yet. Here is a better view of the stadium. It's a little washed out looking from my photo. I was trying to take a quick snap shot without getting trampled by all the people rushing to get in.

I was worried that they had restrictions on cameras, but I was okay to get in with mine. I took the smallest lens I could find so it wouldn't be too obvious looking. 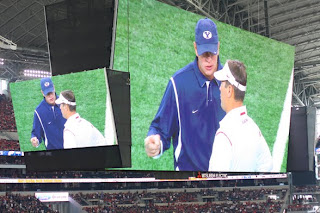 WOW! That's the replay screen. Actually it broadcasts the game live with commercials and team intro videos during the game. It's not much different in content than what you see in other stadiums, except the size of it. My slr lens isn't that wide so to give you a better view here is a shot from my camera phone. 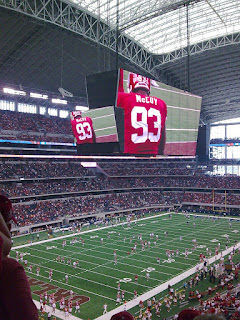 That's Gerald McCoy. He's one of three upperclassmen that decide to forego the NFL draft to stick around another year. The other two being Jermaine Gresham (TE) and Sam Bradford (QB). Gresham sat out this game with a banged up knee. Sunset through the glass. The intro video was insane. I really think that our intro videos are the best. BYU's wasn't too shabby either. The only problem is that you can't hear anything in Cowboy Stadium. The acoustics were horrible. They left the roof closed for this game and I'm wondering if that had any bearing on the muddy sound.

I felt sort of guilty watching most of the game on the big screen, but it's so hard to not look at it. Our seats weren't the best so actually it helped a lot to see what was going on. I'm really glad Jerry Jones built a stadium around his new TV.

I knew it was officially football season when I heard my dad tell his first joke of the year. Every game when the opposing team comes out of the tunnel they send their whole team out. Some fans cheer, some boo and when our team comes out we only send our 5 captains out first.

Dad turns to me and says. "well, it looks we'll only need five to beat 'em." Every time. Every game. Without fail I always hear this joke and I never see it coming. Dad jokes. What can I say? If I could upload the sound of a rim shot and a crowd groaning I would.

Anyhoo, on with the game.

The first series didn't go so well for us. We had four false starts in like 6 plays. Really sloppy beginning for both teams. The huge screen was cool in that you can see everything going on during the play even seeing the veins in the cheerleaders arms, the sweat pouring down the players faces ... 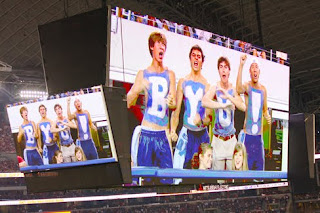 Max Hall (QB) looks like he's thinking "I thought these guys were good, man they suck!" 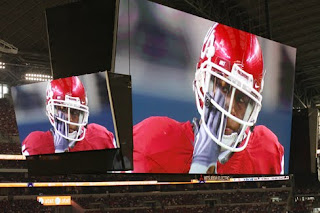 "Not again. Loosing to the underdog is gettin' old." 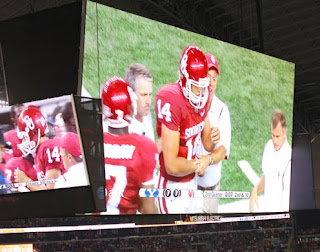 Our quarterback was knocked out of the game at the end of the second quarter. It looks like he might be out for at least 2-4 weeks. Maybe longer. 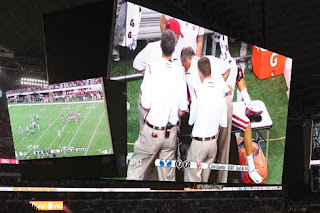 Backup QB Landry Jones was pretty acclaimed coming out of high school. He actually didn't play that badly considering he woke up this morning thinking he was going to be holding a clipboard all night.

How funny is it that it's a guy named Landry playing QB in Cowboy Stadium? 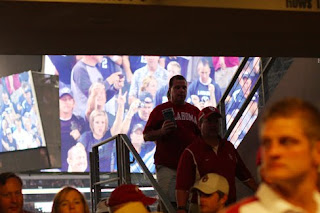 I guess every fan at some point questions the playing calling and I'm no different, but I really don't understand why they keep calling little out routes which nobody could execute all night. Actually they called that play a lot and neither QB could throw the ball anywhere close to the receiver and when they did the receiver couldn't bring it in. Really they looked sloppy all night. The defense played pretty well, but the offense kind of stunk it up. I thought that they might suffer a little because of all the O-linemen leaving, but I didn't think they would look this bad.

Before the game my dad and I always try to do predictions on how the game will go. I thought it would be a close game, but he talked me into thinking it would be a blowout. My prediction was 35-14 OU over BYU. As it turns out I was only half right, BYU scored 14 but OU only scored 13 points. So sad. Actually the saddest part was loosing Bradford and Gresham. I really fell sorry for those guys who wanted to come back instead of leaving for the NFL. I really hope the injuries aren't career ending. It happens to so many athletes, and it would be horrible if those guys couldn't play this year and beyond. 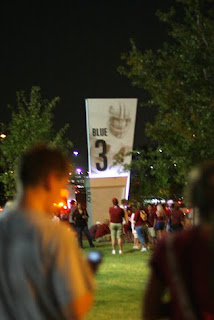 Overall the stadium was laid out pretty nice and easy to get around. They had escalators and stairs. Even though we sat up pretty high we didn't have to actually walk up many stairs because of the way the concourse was set up. The concessions were a little pricey and I wish the acoustics were better, but it's such a nice stadium to see a game. 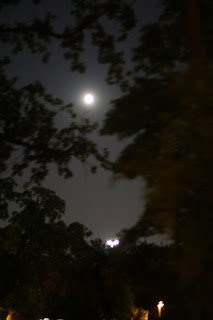 A full moon. Sounds about right.

Maybe we can get back on track starting this next Saturday. We're playing against Idaho State, which I think is a Div. II school. That should help our young O-line and QB build some confidence.
Posted by Jeremy at 4:18 PM