Recently I delved into buying a few blasters of the 2009 series one and two. I'm about 140 cards shy of finishing each series and a hobby box won't really help me at this point. 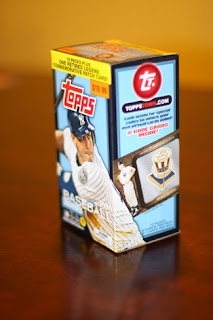 I've tried to stay clear of the blasters up till now mainly because I liked the refractors in the cereal boxes and also I thought the patch cards were a little stupid.

After doing a little research (not enough perhaps) I realized that their were "stealth blasters" that contained either blackout type parallels or retro parallels.

I mistakenly thought that if the blasters weren't marked as having the parallels that they would just be "normal" base cards.

I misjudged that one by a mile.

I accidentally picked up a blaster from Target with no indication that it contained any retro packs.

....except I forgot about the bar code thing. The series one blasters with the #12 contains an entire blaster of the retro cards.

I had forgotten that until I got home and was opening the third pack.

Calling me a little slow is like saying David Wrights new helmet is a "little" bulky. 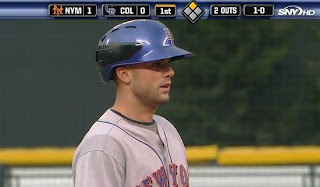 Look at that thing. Actually it's good that this helmet can withstand hits better. Since he'll only be able to see his feet and the home plate with that monstrosity on his head he'll need all the protection he can get.

Anyway, here are a few highlights. 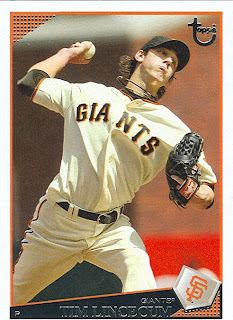 I'm glad I finally got this Lincecum card in my collection. He's one of my favorites. 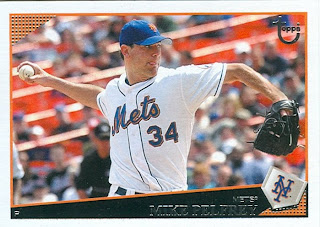 I've got three versions of this card now. It'd be cool to get all three Johans or all three Wrights like this. 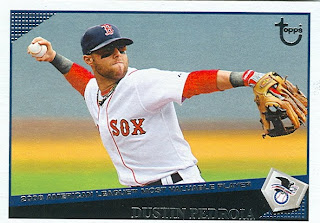 I like the cards overall, they are a little thicker and I like the gray backs and the retro logo, but I'm still thinking that it looks a little weird in my binder with the other cards. I really like this Pedroia card. The bands of color behind him really stand out. The red in his uniform really pops too. 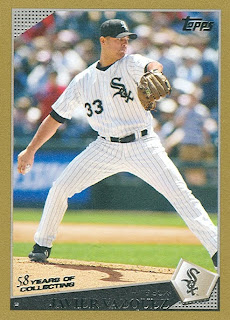 The only card that was shiny on the front and back besides the Toppstown was this Javier Vasquez gold-bordered card. It seemed really thin even more thin than the regular cards. 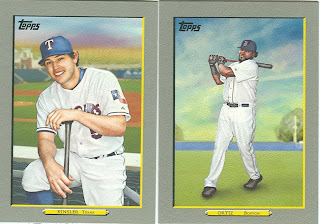 I was able to pull a few turkey reds that I didn't already have.

Here are two cards that, to me are completely different despite the fact that they show the player's back. 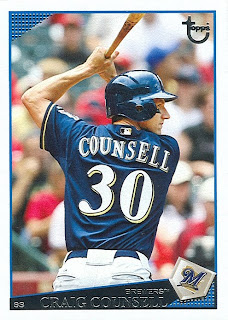 In the Counsell card, the stance, the fact that you can see his profile. His name and number clearly makes this card an exception to the rule that shots of the player's backs aren't really that much fun to look at. (I'm not sure if that's a rule or not. I guess it's just one of my rules to live by.) 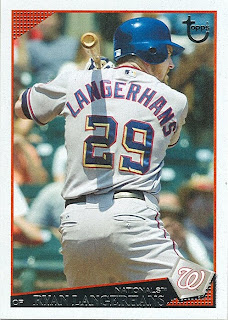 Here is another one from the retro blaster that basically shows the same thing, except to me it doesn't work at all. The main reason why I don't like it is because it doesn't really show much of his face and the cropping looks off to me. I don't want to see to much of someone's lower body. Maybe if it was horizontal it would be better. The bat, number, name and his face would be more of the focus of the card instead of his numbers and lower body.


At least I pulled one Legend of the Game insert that I didn't have. 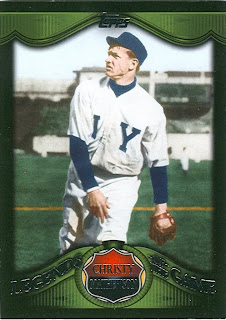 After all that I really was hoping that the patch card would save the blaster for me. 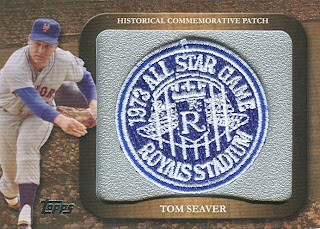 All I can say is WOW! I hit the jackpot! Not only is it a card from my favorite team, but it's also from the year I was born. (please don't call me old!!)

Actually the patch card is kind of nice. I wouldn't go out and buy any of these just for the patches, but they are kind of cool. It's thick and the material behind the patch is kind of spongy. The only problem I can foresee is that the border around the patch area is really thin and eventually it might become torn or mashed in around the edges.

Man this is a really nice card.

So after all that I'm really happy to have this patch card included in the blaster.

And now I'm at about 100 cards shy of finishing series one, so that's cool. If anybody is looking to trade for some of these retro cards, just let me know. I have some listed up for trade over at my trade list. Which is here: noone'sgoingtotradeforthis


That's it for me for a while. Hopefully I can upload some photos from my trip to Dallas to see OU play BYU in a college football game in the new Dallas Cowboys stadium. I'm going to try and sneak my camera inside. I also hear about restrictions on cameras, but I always see a few older dudes with cameras with long lenses. I'll probably use my smaller lense and let my dad hold it. That might work.

Thanks for reading!!
Posted by Jeremy at 4:23 PM