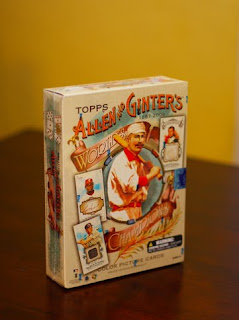 I finally received my A&G box in the mail the other day. I've been so busy I haven't even really had a chance to take a look at it yet.

I can't believe I've been waiting for this since the middle of June. I really should have gotten on the ball a lot sooner to order a box.

Most of you have probably grown weary of Allen and Ginter by this time so I won't bore you all with every little detail of this box, but I will start with the boxtopper. 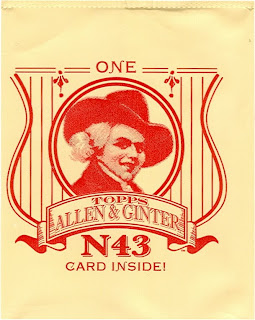 I actually forgot about these boxtoppers so it was a nice surprise.
The planter's expression coupled with the "One Card Inside" inscription almost seems to say "Come on in, there's cards inside!! Get cracking buddy." 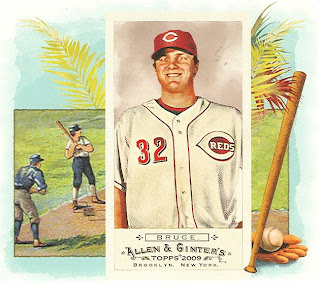 So I did. I got a Jay Bruce card. Really wish it would have been about three other guys besides Bruce, but it's nice I guess. I figured these cards were a lot bigger and thicker than this from looking at scans online. Sort of an anticlimatic beginning to my Ginter-Fest. He sort of looks blind in this card too. Weirds me out a little bit. 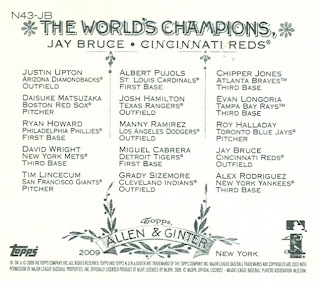 Ah, I remember my first box, the excitement, the disapointment...Congrats, have fun with it and good luck! I am sure there is someone out there who would trade big for that Jay Bruce N43, too. Keep me in mind if you get doubles of any Rays or Negro Leaguers! I call dibs if you pull a Cat Osterman or Negro League auto!
PS. How is the black bordered set coming?

If I get any Rays or Negro League guys I'll keep you in mind. I haven't pulled a single black bordered mini yet out of my box and I've opened about 10 packs so far! sucks.