I really wanted to break away from the sets I'm currently trying to finish and find some new packs to rip open. I haven't had a chance to open anything that was a current release so off I went to target to find some candidates for opening.

I picked a blaster of Goodwin Champions, a Blaster of Stadium Club, and a pack of Topps Heritage.

I think it was 2.99 for a pack of 8 cards. I couldn't resist a pack of cards with Abe, Mickey Mantle and a big Apollo II spaceman head on the front of the card pack. 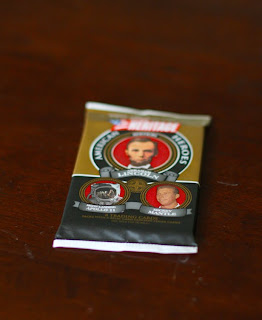 Since it's only one pack and I'm really excited to get to the other stuff I bought, I'm going to show only two more scans... 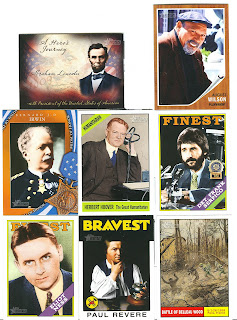 The front of the cards... 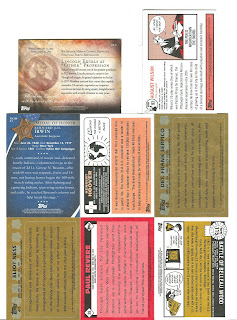 ...and in a true show of dorkmanship I also scanned the backs. Sometimes the backs get over looked and I wanted to show off how nice some of the backs looked. I uploaded these at the full resolution that I scanned them at, so I think if you want to click on them to check out what they say it should look big enough to read. Only problem is the backs seem to mostly be horizontal, so that might make it a little hard to read. Sorry.


The Abraham Lincoln card is really nice looking on both the front and back.
According to the card, Lincoln was self taught at Law. "He used quaint, straightforward arguments with a touch of humor to sway juries."

And who couldn't love the real life Serpico. He does look a little like Al Pacino in this card.

Alright! That's all for now. I'm going to try and get around to opening that blaster of Goodwin soon.

Thanks for reading.
Posted by Jeremy at 11:20 PM