Gift from Justin at Is this a Wasteland, no it's Tampa Bay sports

Justin, who runs the blog Is this a Wastland, no It's Tampa Bay Sports recently made an announcement about wanting to cull his collection of football cards and was going to give them away for free! Everybody loves free stuff, right? So I signed up for some Vikings cards.

As far as the NFL goes I love the NFC north the best. The Packers, Bears, Vikings are all fun to watch for different reasons. I root for the Packers mostly and I was really excited to see them win last week against the Bears. I especially loved the third down play for a touchdown. I love it when teams play action pass or just pass on third and one. Especially when it works. When it doesn't work I really hate them and their offensive coordinator. Ha Ha. I also love it more when they throw deep on that play. Totally unexpected in that situation.

The Bears have Tommy Harris from OU as well as a couple of other guys that I like to watch. (I really don't like Cutler). I like the Vikings for the obvious reason that A.D. plays for them. And the Lions, well every team needs a rest during a long season, and the recently the Lions have been that patsy...I mean team for the NFC North.

Anyway, on with the cards... 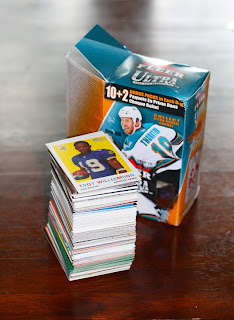 As you can tell from the photo, quite a generous stack of cards. This package was really heavy when I picked it up. Like a brick of cards.

I can't scan and show you all the cards, so I'm picking out the highlights. 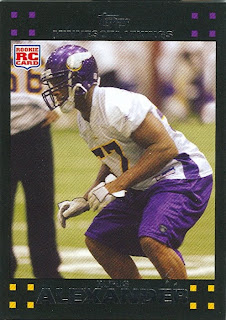 Here is a nice card from a guy that I had forgotten about. Actually I haven't forgotten him completely, but I forgot he had been drafted a few years ago by the Vikings.

He was quite a star at OU, leading the team in tackles in '05 and '06. Those weren't very good years for us especially offensively, but with guys like Rufus we didn't have much of a drop off defensively after guys like Tommie Harris, Dan Cody and Dusty Dvorachek were drafted.


A few years ago during an ill-fated return to college I took a lot of journalism classes, and found myself more interested in print rather than broadcast media. I stopped by the newspaper offices and one of my friends was hanging out with Rufus. Really a nice guy. I never know what to say in those situations, I just try to treat them like any other person instead of some star.

He seemed completely different from his on-field persona. Seemed like a really quiet and educated person. I really was hoping he would make the cut with the Vikings, but injuries really screwed him up. Fans used to always yell out "roooooo" for Rufus after each tackle he made.


Looking through the stack of cards my eye usually finds the retro sets first and the shiny stuff later. 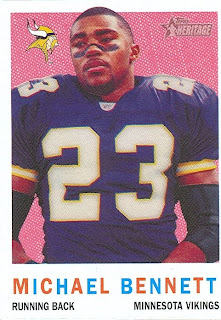 Michael Bennett from the 2005 Heritage. 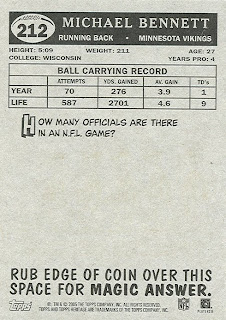 These cards also have the backs that have trivia questions with answers that you can rub off. This always seems to be a football thing, I wonder if they've ever done this same thing for baseball cards? 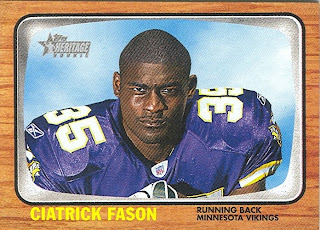 Bowman Heritage of Fason. I remember this guy from his Florida Gator days. Love the horizontal card and the fact that he's looking straight into the camera. 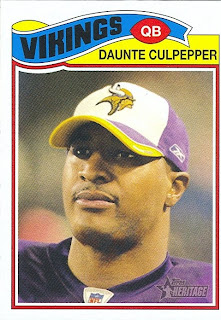 2005 Heritage card of Culpepper. I always associate him with Randy Moss. 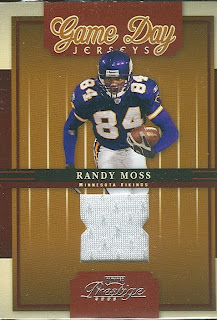 2005 Donruss Game Day Jerseys card. "The enclosed piece of Jersey was cut from an Authentic Jersey personally worn by Randy Moss in an official NFL Game. The authentic Game-Worn Jersey was obtained and is guaranteed by Donruss Playoff LP."

Cool. I wonder if "an Official NFL Game" could also mean a pre-season game as well? Doesn't really matter I guess, it's still game-worn. 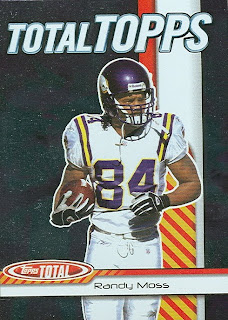 Every time I hear "Randy Moss" I don't think about him as a receiver or even his off the field exploits like trying to run over a parking attendant. I always have this song lyric in my head. "the whole world loves it when you make that sound. wha wha. whawhawhawha." .... something about "flossing like Randy Moss." It might be Outkast, but I'm not sure. Catchy song. 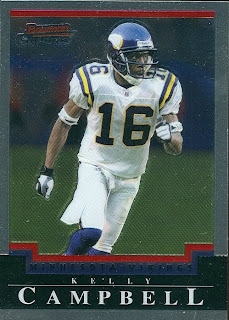 Shiny card of Kelly Campbell. Currently with the Buccaneers. 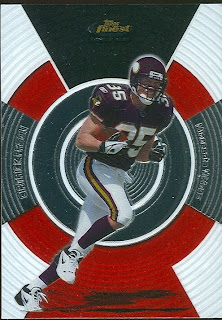 A shiny Fason from 2005 Topps Finest. 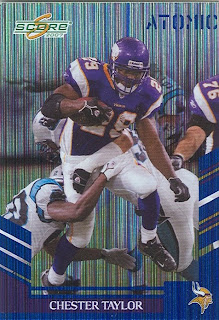 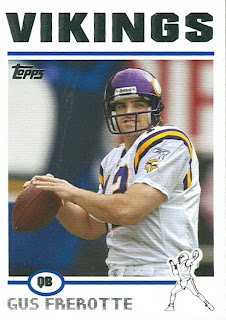 A 2004 Gus Frerotte. This guy played at Tulsa University. He was most known (at least to me) for being the guy that headbutted the goal post after throwing a touchdown pass. He was on the DL for the rest of the season. In the words of David Letterman, "a real bonehead."

Now for the grand finale. 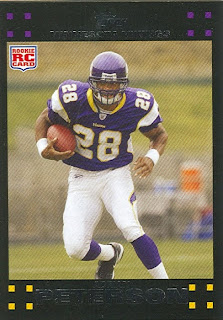 I almost bought a blaster of 2007 Topps football at Walmart on Friday. Mainly to see if I could get this exact card. Also, so that I could just have something to rip open. I chose a cereal box of 2009 Topps football instead. Still waiting to open that one. Nice card too, I don't even mind the Gatorade jug in the background. Actually the jug makes it better to me. 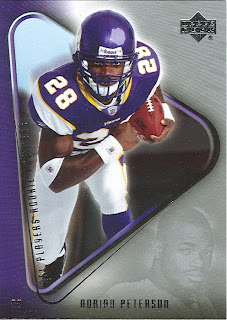 2007 Upper Deck NFL Players Rookie Premiere. It says on the back that despite injuries A.D. should be on the brink of stardom. I think that's been proven, even though the guys at Sports Illustrated are just now figuring that out. They have a pretty goodd story on Peterson this month about his production against the teams that drafted players ahead of him. 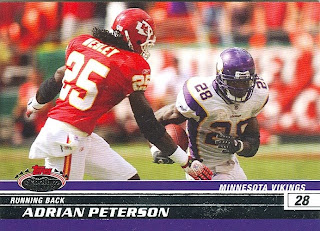 To finish off, a nice horizontal action shot of A.D.

Thanks again, Justin. And if anybody hasn't stopped by yet, check out his blog over at: Is this a Wastland, no It's Tampa Bay Sports. I'm putting together some sort of Orioles, Tampa Bay Rays card selection to send over to you soon.
Posted by Jeremy at 10:38 AM