Here is my pulls from the middle of the blaster. 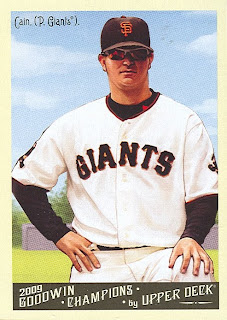 Matt Cain. Loves to hit my favorite player in the head. Pretty much the same background and same structure behind him as in the Kershaw card. 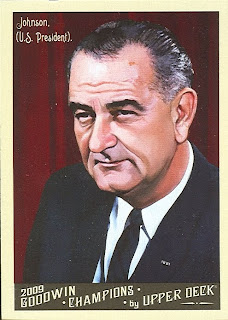 LBJ. Nice portrait in the mold of a painting you might see of a bank president. 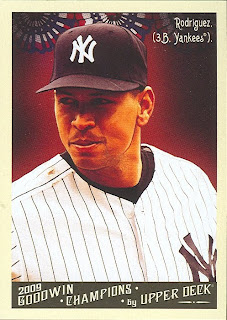 A-Rod. Weird red,white and blue banners behind him. For once he looks like an adult in an Upper Deck card. 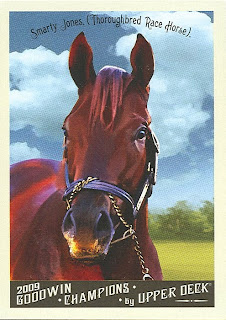 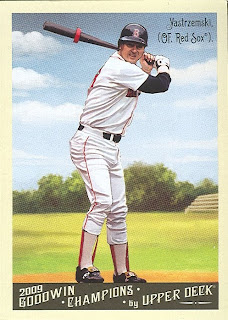 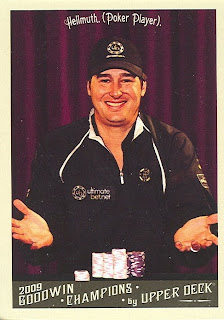 I hate pulling poker players. I don't like to watch poker at all. It's sort of fun to actually play, but I think it's about as exciting as watching golf. Or bowling. What makes it worse is that he's slathered in ultimatebet.net logos. I count 4 of 'em. 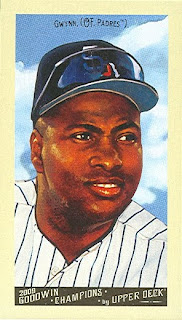 Mini Gwynn. Sounds like jingle from a cookie company. "Mini Gwynns!" Say it fast with a high pitched voice and it works.

I just realized the backs of the cards have a specific season of stats with a blurb relating to those stats. In Gwynn's card it says, "Ted Williams was the last player to hit .400 in 1941, but the highest finish to a season since then was Gwynn's .394 average in 1994." Nice. I always think of him as a Padre wearing the old uniforms. This looks like a newer uni. 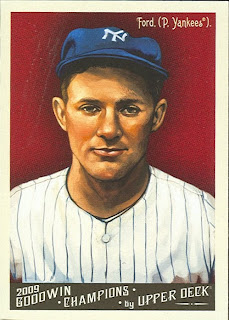 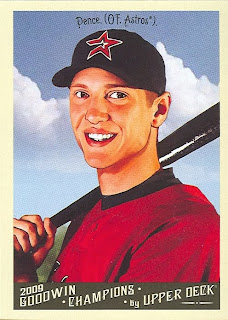 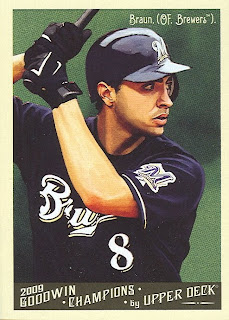 Ryan Braun. I like that it's dark. The dark green background is nice with the Brewer's blue. It looks like they had a little trouble with his nose and mouth. 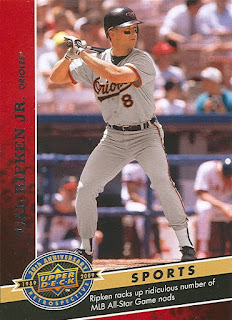 I really hate these too. At least it's a good ballplayer and not some random crap like speedometer or something. 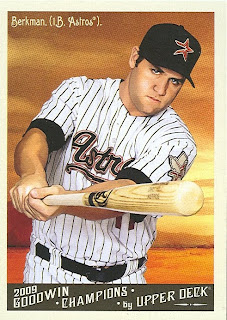 Lance Berkman. Look like he wants to knock our heads off with the bat. Look at that expression. 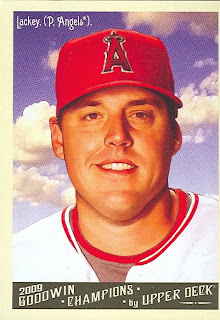 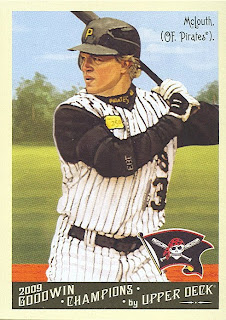 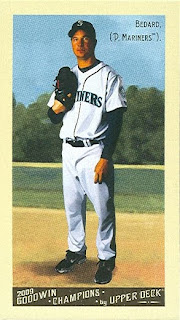 Mini Bedard. I should mention something about the minis. They are a little bit slimmer and shorter than the A&G minis. 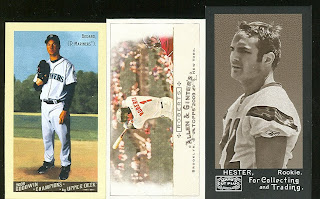 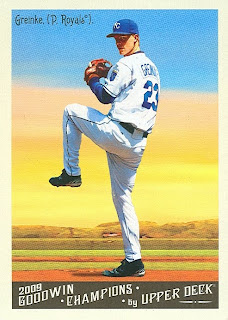 Zack Greinke. Looks sort of like an interstate behind him. Maybe it's a farmhouse. 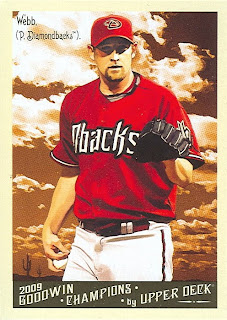 Webb. He's not catching a ball here, he's catching your eternal soul! Your eternal soul thrown in a fiery pit of cardboard hell! How's that for a double play? Card collecting isn't so fun now is it? Reminds me of the movie U-Turn for some reason. I haven't seen that movie in a while. I like the addition of the Cacti in the bottom left of the card. Arizona=cacti. It's a funny pose anyway, because he's got his glove up like he's looking to catch a ball from the catcher, but he's already got a ball in his right hand. 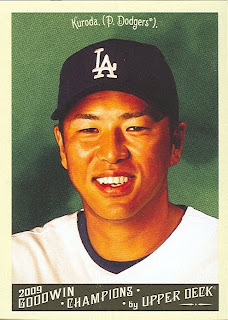 Kuroda. "Kuroda impressed in his Major League debut in San Diego on 4/4/08. Allowing one run and three hits in seven innings to pick up the win." 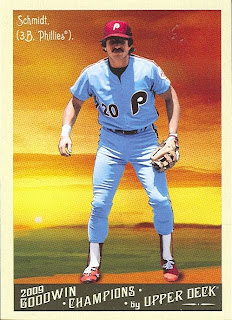 Whoo hoo!! Another good one from Goodwin. 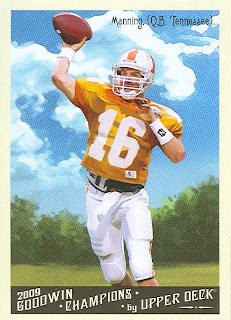 One of the Manning boys. Shown here in his Tennessee Vols uniform. My dad still complains about him not winning the Heisman. 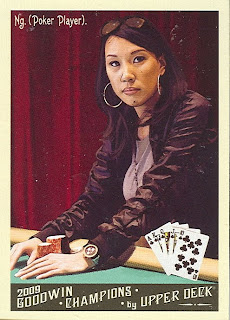 Ng. Poker? Heck yeah I do. That joke never gets old.

Remember when I said I hated poker players? Well, not this one. She's kind of hot. I still won't watch that crap. I like the card logo on the bottom right. It's kind of amazing how much detail their are in these cards. You can easily see that she's wearing a chronograph watch. 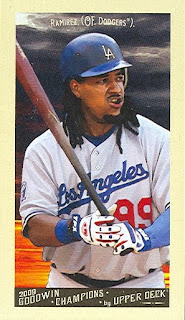 Mini Manny. Bizarre expression. The gloves look a little too cartoonish. I think it's because they are too bright and white. Dirty them up a little or add some shadows and it would blend in with the card more. The rest of the card is dark, so that makes the gloves stand out too much. 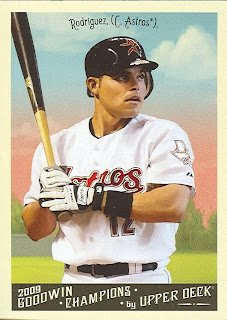 Rodriguez. "Pudge". Their is an orange sunset behind him, but the light is hitting his face from the left front of the card. I don't know how this is possible. Maybe from a stadium light. In the middle of an empty field with no line markings, spectators or players nearby. That's logical. 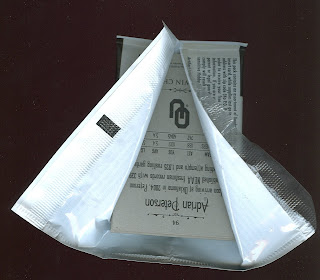 I'm gonna stop with this next one for now. I saw the name when I opened the pack. 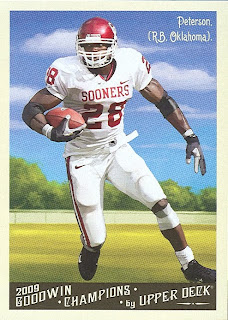 This is the one card I really was hoping to pull!! The only way this card could be better is if it depicted Adrian giving me a piggy back ride while scoring a touchdown. I think this calls for some theme music.


Having a show tune close out this post will cleanse our pallets for the next round of Goodwin. The next post will wrap up the last three packs. 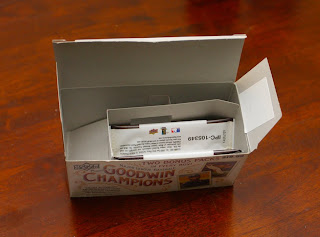 I'm not even sure I need to open these now. I feel like I pulled everything I wanted so far. I'm really glad I didn't succumb to pressure and try to buy this stuff off of E-Bay.
Posted by Jeremy at 7:43 PM