The other night I picked up a pack of Score Football. Not just any pack though, it was a 52 card jumbo pack. I was hoping to pull a Peterson or at least a few Packers or former OU players.

I wasn't able to do that, but at least I pulled a few players that I have heard of before. 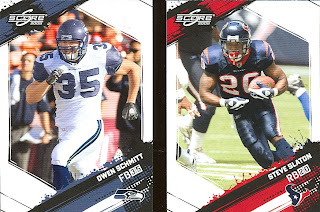 The last time I saw these two guys they were running all over us in the Fiesta Bowl. Funny how all of last season flew by. When I saw these cards I was really surprised that they had played last year in the NFL. 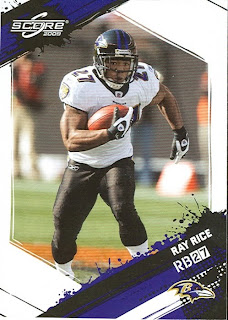 Here's another guy that I thought was still at Rutgers.


Whew that was a lot of typing. I looked up these stats only after ripping the pack open. Seems like a lot of different parallels to the base set which might be a little confusing to some people like myself. Also a few different inserts. 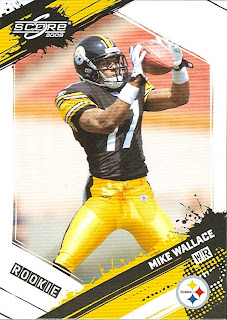 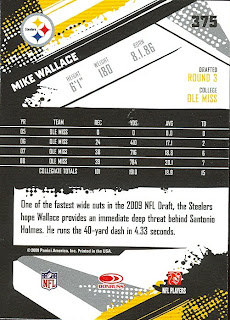 The inclusion of college stats on the back is nice. I like the layout of the card, even though all the diagonal lines took some getting used to. 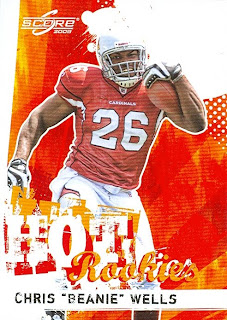 I pulled a Hot Rookie cards of Beanie Wells who played for Ohio State and who is now a Arizona Cardinal. 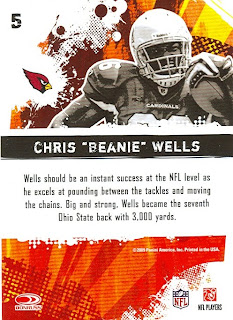 The design of the back mirrors the front with a black and white version of the player with a little bio. I like the inclusion of the team logo on the upper left. 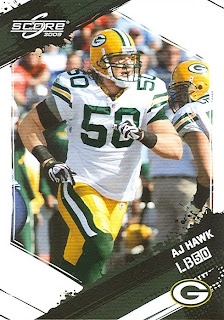 This A.J. Hawk card is one of the non-glossy ones and the only Packer I pulled, which sucks. 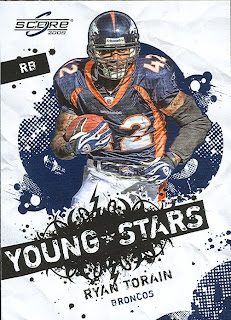 This is one of the "Young Stars" inserts. It looks a little like they went overboard with the HDR, but I like the way the player jumps out of the background.

I only pulled one of these, but I'm guessing that they are mostly of players entering their second year. From his bio it doesn't seem like he's much of a star, but I've never actually heard of him. Who knows, maybe he's a stud. The bio mentions him being hurt, but I would think that this guy: 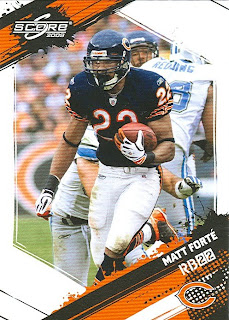 ... should be included as a "Young Star". I don't know much about these inserts, so maybe he's got his "Young Star" card and I just don't know it. According to the bio he was third in the NFL in rushing with 1,715 yards. I'm not sure, but I think A.D. and maybe L.T. would be the other two? I really like that it's a game shot too. It breaks up the monotony of the craziness of the borders and the insert cards. 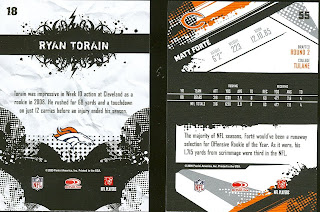 Here is a comparison of the backs of the two cards. The Forte card is more straightforward with his rookie year stats on the back whereas the Torain card has a little bio. I'm guessing that's pretty much standard for all the inserts. I really like the look of the team logo in the lower third of the card back.

THe Franchise and Future Franchise cards really stood out to me mainly because of the player cut-outs against a crazy blue background. 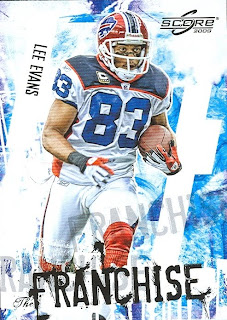 I'm not familiar with Lee Evans. I thought Lee Evans was a 1950's starlet. 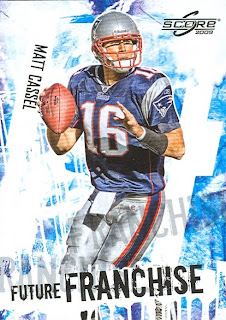 The Matt Cassel card was a really nice pull though. Hopefully he'll play as good in St. Louis and he did with the Patriots.

The crazy color splashes and diagonal lines took some getting used to, but I like the artwork and layout of the fronts and backs of the cards. I think it's cool that they mention the college team of the player on every card, even the veteran cards.

I could never get over the fact that the cards seem a little like they were meant for kids though. Their a little too crazy for me, but since they're so cheap I might have to pick up a few more jumbo packs or a box sometime. If I remember right the blaster was not a good deal in that it only included like 7 packs of 11 cards or something like that for $20.00. That seems a little steep for this product, especially when the jumbo's go for $4.97 for 52 cards. It'd be nice to pull a few of the players I like so I'm going to have to grab a few more of these.
Posted by Jeremy at 12:14 AM

not to burst your bubble, but Matt Cassel is in Kansas City, not St Louis

You're right. I don't know why I always get those two cities mixed up. thanks.