I just entered the cool contest over at Enough Already

I'm a little late to the game, but it worked for me last time. I'm going to see if I can win two in a row for a little blog contest streak.
Posted by Jeremy at 4:53 PM No comments:

The value of a good trade


First up is a couple of former OU greats Rocky Calmus and Roy Williams. 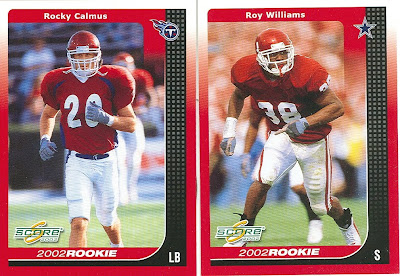 They are pictured here in their rookie cards with the logos of their nfl teams. I don't believe these two are in the league anymore, but I love getting their cards in the mail.

It took me a while to realize that their were no OU or NCAA logos on these cards. Doesn't really matter to me. I still like them. I pride myself on being able to pick out little details in photographs and it took me a while to notice that Rocky's jersey is just a Tennessee Titans jersey painted red.

I can never seem to pull any former OU players. I'm wondering if pack searchers have developed an infra-red system for searching out players in crimson and cream.

I've seen cards like these in the card shop. I hate to sound like a cheap skate, but unlicensed cards of former players aren't really worth 9-15 dollars per card.

Having said all that I still really, really like the cards. Especially since that's the only card I have of Roy "Superman" Williams in an OU uniform.

Here's where the Superman nickname comes from. Close your eyes Longhorn fans.

I really shouldn't embed anti-Longhorn videos in a post about OU, but I can't help it. It seems that every video on youtube has OU/Texas highlights or lowlights whichever way you want to look at it on their website. 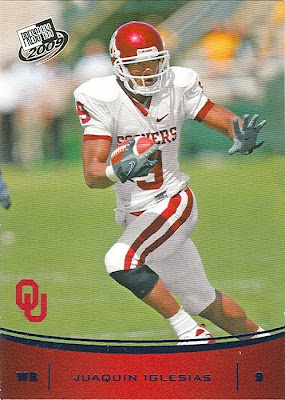 Here's a really nice card of Juaquin. I'm guessing by the empty stands and green and gold t-shirts that it's at a Baylor game. Poor Baylor. 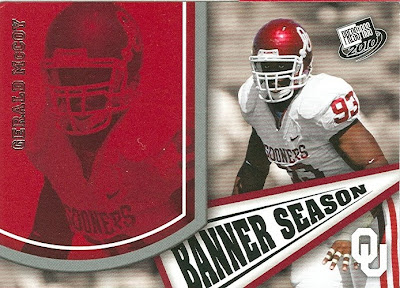 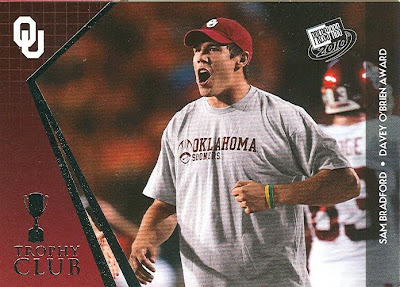 A couple of nice Press Pass cards. I only opened one blaster of this. I didn't pull any cool autos. I pulled a few OU guys, but I didn't get these two cards. These are pretty nice, except that Bradford's card is obviously from last season when he was injured. I'm really hoping everything works out for him in the NFL. 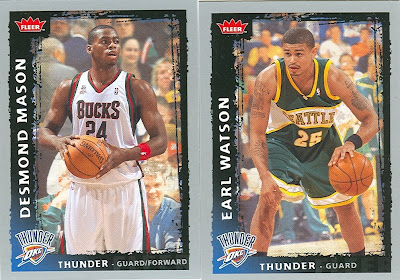 A couple of Thunder players in their pre-Thunder jerseys. Earl is a Pacer now.
I'm thinking that Fleer baseball and basketball might be something that I need to check out more. Brian has been posting up lots of cool Fleer Ultra cards lately.

The Sonics logo and jersey color scheme is really nice. It sucks the way teams are moved and sold to other cities. I'm glad that we have an NBA team though. I was really surprised the way the season went last year. I wish we had been more patient and tried to buy out George Shinn for the majority ownership of the Hornets. It would've been a lot less creepy to keep the Hornets than to take over another cities' team. 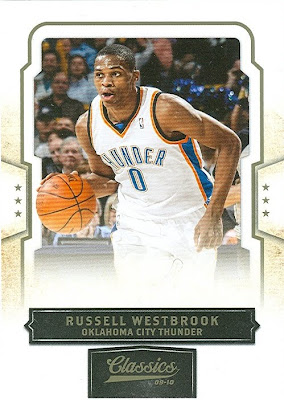 Pretty good player that got dogged a bit in the local sports media early on. Ended up with a pretty nice season. Goes to show that maybe the talking heads should have a little patience when evaluating people. Nice looking card too. I like Westbrook and Durant the best. I really hope Durant stays around a long time. He'll only get better.


Thanks again for the cards. I'll try to get to my trade posts a lot sooner next time. I've been a bad procrastinator for a few months now.

Thanks for reading!
Posted by Jeremy at 11:23 PM 2 comments:

Labels: play at the plate, trade, University of Oklahoma

I'm a little late to the party, but anyway Big D at the Hey that's mine blog is doing a custom card giveaway to 5 lucky winners. Go check it out.
Posted by Jeremy at 11:13 AM No comments:

No, I actually wasn't looking to buy any new nerds. One nerd is enough for this household. I had to go nerd supply shopping this evening. Actually I had to hole up in my house for a while until all the tornadoes passed over Norman.

I have a problem with procrastination as well as loosing interest in things and picking them up later. One of these things is trying to get my comic book and card collections organized.

As you can tell I still need a lot to do in the organizing department. My "man cave" is not really lookin' too good right now. This is actually the cleanest part of this room. It houses all of my 16mm film, 35mm film, cards, photos, drawings and comic books.... as well as regular books, some old clothes, media guides and camera equipment. I'll start with the little things like cards and comics and work my way up from there.

Anyway, the vintage stock place has cards, card supplies as well as comic book stuff and video games and used dvds. Basically a bunch of stuff that you don't really need, but think that you do.

Looking into the counter the first thing I noticed that they were still selling 2008 Stadium Club football. Cool, and only $19.99 per pack! I couldn't believe it. I've only seen those in blasters at Walmart and Target. Needless to say I didn't pick up any of those packs. Especially not for just six cards. I don't care what auto or relic is supposed to be in the pack.

But I did see something pretty cool. Actually 3 somethings.

I really wanted to pick up a pack each of Chicle Football and Baseball. I saw the packs of baseball, but decided to pick up the two cabinet cards instead. When I saw the 3-1 Heritage boxloader I picked it up too. I've heard tales of bloggers having store owners setting aside boxloaders and other cool cards, but that will never happen at this place. It's too corporate so I'm not sure they do that. The traditional card shop dude probably has his regulars and I don't go in there enough for him to remember me.

So you can imagine that I was pretty happy to pick up these three "packs". I'm not completely sold on either 2010 Heritage or either of the Chicles. I like them, but I don't really love them either so this will give me a chance to check them out.

I'm sort of on a cabinet card kick anyway these days because I won some 2009 Allen and Ginter cabinets on ebay recently and they will look nice in the binder. Cabinet card sized pages were one of the other things that I picked up at the store tonight.

Not too bad. Sepia toned Heritage Twins. Actually Heritage triplets of Twins or something like that. 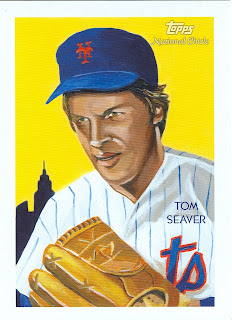 Okay. A little better. A player I like,but I'm not a big Lempa fan. He's the guy responsible for the Nolan Ryan base card that I don't really like too much. The stuff on his website looks pretty cool though, just not the two Chicles that I've seen.

Seaver looks a little demonic here,but I like the bigger painted card. 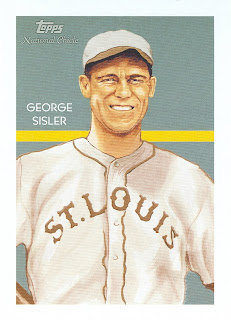 Woah! This is a lot nicer. I really like the artist's take on Sisler.


Their is a nice little write-up on the back of the player and artist. Ya'll have probably seen this already on a Pack to be Named Later,but anyway here's another one. 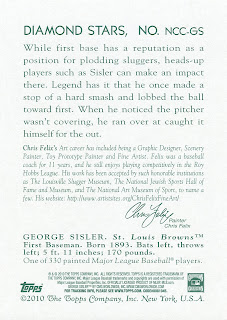 According to the back he threw a lob to himself! Dude's pretty fast.

Not quite the fun of opening packs with multiple cards, but still fun to see what's going on with the cabinet cards. I'm open to any trades for these. I'm not really too keen on keeping any of these. I'm kind of partial to the Sisler card, but if somebody else is looking to collect these, let me know. Part of me wants to keep them, but part of me wants to find them a better home.

Thanks for reading.
Posted by Jeremy at 11:20 PM 2 comments:

Lately I've been consumed with making little sketch cards. When I first came across sketch cards I thought they were a little weird. I guess the first ones I really saw in person were the sketch cards from last years Allen and Ginter. I wasn't that high on them at the time, but recently I had the chance to finish off that set and it made me look at them differently.

So anyway, here are some random sketch cards that I've done.

Originally I had the bright idea to do them on large paper and then shrink them down to card size. 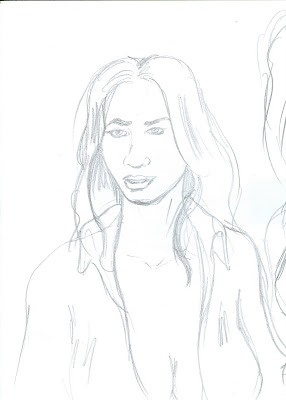 I then, had the bright idea to trace them onto thicker paper stock so it was more like a trading card. Only one of these made it to the final stage:

This is a Valkyrie, a character from Airboy. A comic that originally ran in the 1940's and made a brief comeback in the mid 80's.

I realized that doing all that scanning and cropping and tracing weren't really necessary. Just making it from scratch on a 2 1/2 by 3 1/2 card is the best way to go. Their may not be a lot of detail, but it's a true sketch card. My cards are a little rough for now, but I'll correct them later.

This is one of my favorites:

Captain America was the first comic I remember owning and he's always been my favorite comic book character.

This is one of my least favorites. I knocked this one out quickly in pencil just to see what a black and white pencil sketch would look like.

Unfortunately it doesn't look anything like Julie Newmar or Catwoman or Julie Newmar as Catwoman. It just looks sort of like a girl in a Halloween costume.

I actually started out trying to do sports related cards first, but none of them came out the way I wanted. This one of the Mick was the first one that I liked.

A little too monotone, but I was working with a black and white photograph so I didn't have much color information to go on. I should have come up with something a little more colorful though.

This one was also taken from a black and white background. I didn't get much more creative with this background either.

Still doesn't quite look like who it's supposed to look like, but I can still practice up and get better.

I left this one uncut so that everybody could see the unfinished borders and "palette" on the left side. I needed to try out the different colors before I committed to using them in the sketch. If you look closely you can see the pencil borders.

I'm not sure why I went to so much trouble picking colors, the background on this card is the worst out of all of them. I don't like the color selection much and I don't like the "craziness" of the scribbles. I should've come up with something a little better for this one. I think psychedelic baseball trails would be cool to add in but I think it might be too late now.

I kind of like my little homemade cards. Nothing much to write home about, but for just playing around these past few days I think they look kind of cool.

Thanks for reading.
Posted by Jeremy at 1:37 AM 5 comments: