June 1st 2012 was a nice day for Mets fans. As we all know that was the day that Johan pitched a no hitter against the Cardinals.

A day latter R. A. Dickey shutout the Cardinals. The Mets were playing well and looked to be on their way to sweeping the defending World Series Champions.

June 4th was a pretty monumental day too. Nothing really notable as far as the team is concerned, but on a personal note, it was the first time I was able to get to a Mets game.

I was in town doing some video and photo work during a convention. I'll probably write more about that later, but for this post I'm going to focus on the important stuff like a baseball game.

I've always been a little envious of the fans that get to live close to their team. I'm no different; I root for the the University of Oklahoma and luckily I work and live in Norman. Not so hard to get to a game when It's a short drive away. In the case of the Mets and the Packers seeing a game is next to impossible. There are a lot of major league ballparks and NFL stadiums I'd like to visit, but going to see Mets would be pretty special. 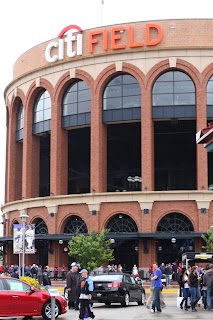 Citi Field is pretty cool. I had always regretted not going to Shea when I had the chance, but it's no biggie. I passed by it on the way to the new park. I took a shot of it from the subway, but it was too depressing to upload. 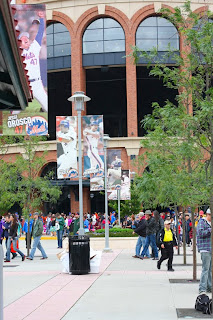 I didn't get too many good shots of the outside of the stadium. I really like the Jesse Orosco banner in the upper left even though it's a little obscured by the roof. 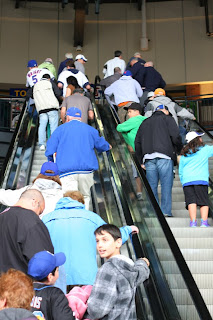 Excitement builds as we go up the escalator to the upper level. On the way up we see some references to some former New York teams. 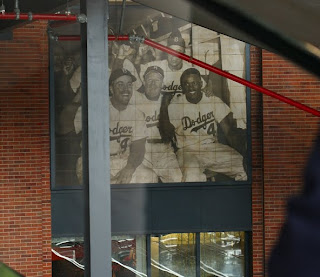 On one side of the escalator they had old photos of the Brooklyn Dodgers. 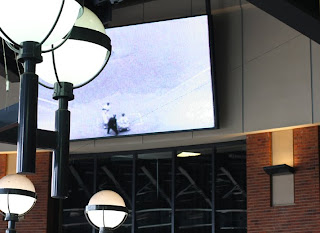 On the other side was a video screen showing what I think is the shot heard round the world clip. The Bobby Thompson home run. 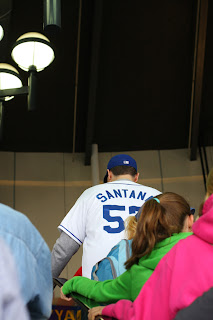 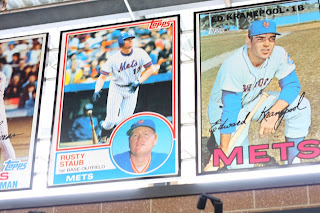 Some Topps baseball cards through the years. 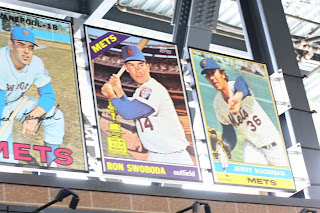 Kind of nice. The Willie Mays card is the only one that I own currently, which came in a trade from Suldog. 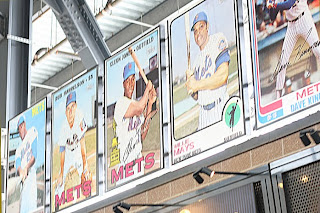 The game itself was a little sad. It was a 5-4 loss for the Mets. If I remember correctly (and I probably don't) A really bad 7th inning led to the Cardinals scoring 2 runs. I don't quite remember if Gee was still pitching at that point, but he threw a horrible ball to second instead of throwing to first. Soon after that the Cardinals scored and then pulled away in the 8th with a couple of more runs. 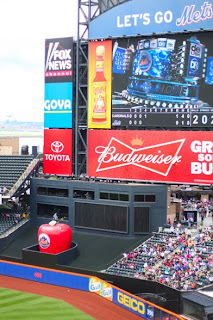 This is a shot from the Mets first score of the game a fourth inning shot from I think Lucas Duda, but I could be wrong. It was almost a month ago. I should've taken some notes. 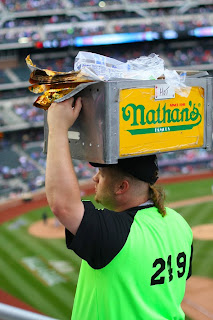 Here is a shot of the inside of the stadium. It's a panoramic shot I did with a photostitch program. Didn't turn out quite like I wanted it to, but at least you can get an idea what the stadium looks like.

You'll have to take my word for it, but pitching for the Cardinals is Marc Rzepczynski and Scott Hairston is pinch hitting for the Mets.

I think by clicking on it you can see a slightly larger photo. 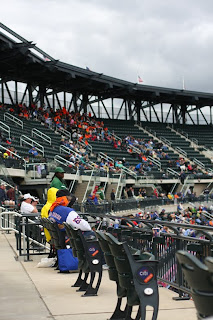 Kind of wished the weather had been a little better. You can see a bundled up fan in the upper deck. 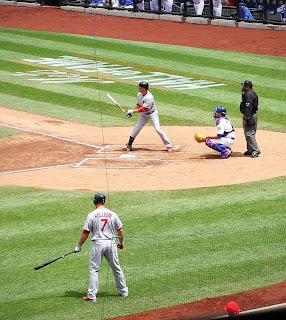 I hung out in the lower level for a while to take some snap shots. It was nice seeing Stillwater, Oklahoma native Matt Holliday play. 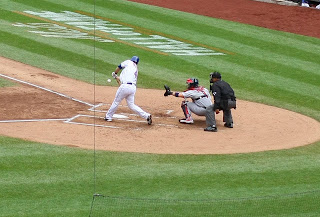 Here is a shot of Mike Nickeas batting. 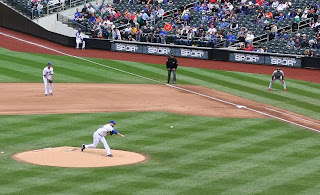 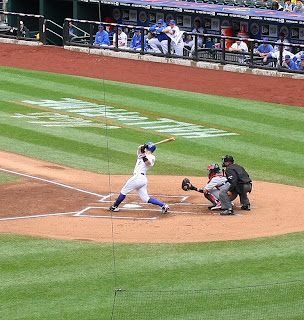 
On a personal note I was hoping my first live experience of watching the Mets would have been a win. You can imagine how frustrating it was to be in New York that week seeing all the highlights, but not having the time to go out to Queens to see a game. 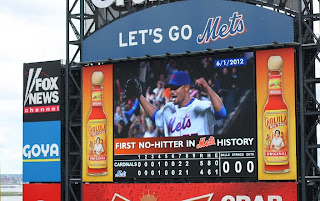 I screwed up a little on my photos. Taking photos and video all week kind of wore me out. I just wanted to be a regular fan and take some snap shots. I even emailed Paul from Paul's Random Baseball Stuff to see how strict the Mets were on cameras and things.

They were pretty lenient about cameras and doggy bags. That was nice. 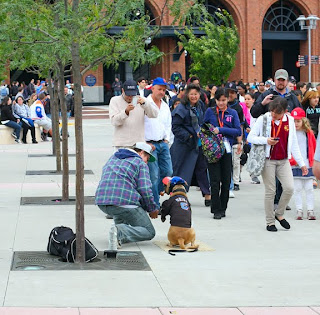 Speaking of doggy bags. I guess they let dogs into the stadium? 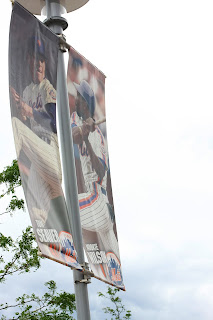 A couple of more shots of the banners outside the stadium. 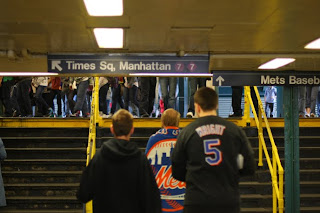 And now back into the subway tunnel to go "home". 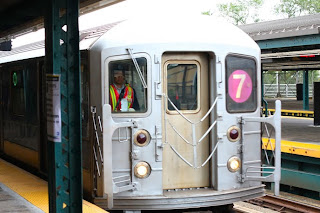 It was a pretty fun experience. Wish I had checked the Yankees schedule again; they were playing that week too at home. I could've caught one of their games too. Haven't been to the Bronx yet. Maybe I'll get another chance to get up there sometime.

Thanks for reading.
Posted by Jeremy at 10:31 AM 2 comments: