Playing with my cards as an adult usually leads to me doing everything but actually "playing" with them. Or at least play with them how I would have as a child.

Currently my card-"playing" is basically updating spreadsheets, writing some blog posts, listing my want/trade lists, and occasionally pulling something cool from packs or from an envelope from a blogger. Sort of the adult version of playing. Pretty fun in a boring grown up way.

I look over the card before relegating it to it's home, be it binder or box. Mostly I don't play with cards these days. My trading is done online. My selling and purchasing is done mostly online. I do like to buy random stuff at the hobby shops and Walmart and Target but my face to face interaction with other collectors is basically nil.

When the weather started to get warmer this spring I wanted to change all that and take my cards out for a little spin. I took my "good box" of cards with the random relics, inserts and of course my new (to me) 1973 cards that I got from ebay and the flea market.

Turned out to be a bad idea. 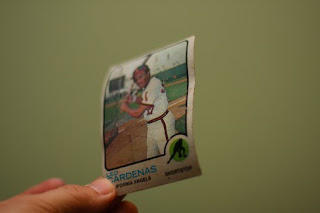 I found this card while weed eating a few months after the rains and tornadoes had passed through Norman. 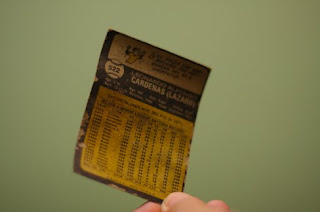 I remember some of the cards blowing away, but I thought I had retrieved all of them.

Kind of sad, but I got another Cardenas in another lot later so I'm good. Just kind of funny that I've already got a casualty this early in my quest to collect the 1973 set.

In addition to the other current stuff out there, I'm working on finishing the 1980 and 1973 sets.

The 1980 set was my favorite when I was a kid and 1973 is my birth year. I thought it'd be fun to try and collect those two sets as a reprieve from all the chrome and auto relic cards that are found in the newer sets. Not to mention the insert intensive sets of the past few months. A&G and Topps series two comes to mind.

What originally drew me to the set was all the cool action shots. 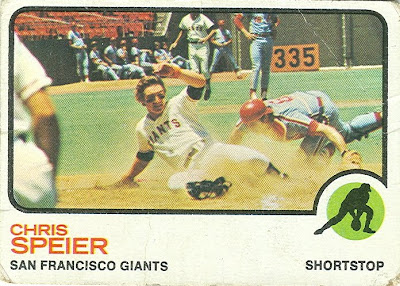 Not only really cool horizontal action shots like the three above, but also cool vertical shots. 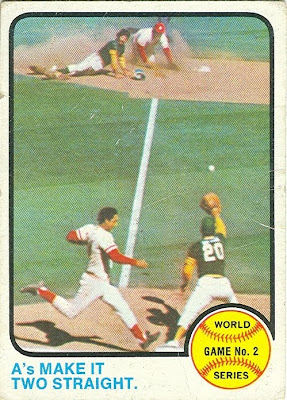 They also look good as photos without the borders and logos. 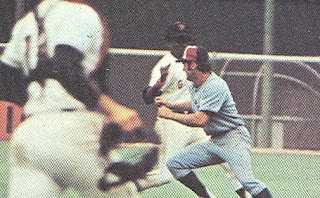 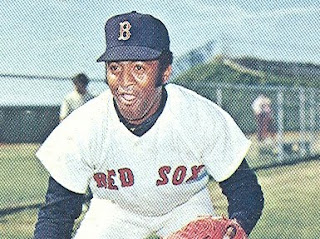 I like horizontal and I like tight shots. I wanted to play around with this shot and turn a vertical card into a horizontal shot. The newspaper and photo editors out there will probably not like my creativity with the cropping, but it looks good to me.

I probably cropped this one a little too tight.

Here is the original for reference. 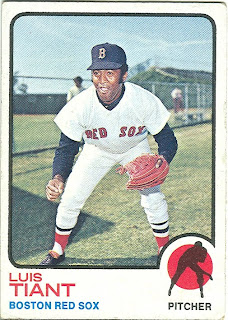 Obviously a vertical shot so I didn't have a lot to work with. I probably should have left in a little more glove, but I really wanted to highlight his expression. It's a great candid shot. This out performs the wacky "Photo Day" card in last years updates and highlights.


Here is Oklahoma's own Lindy McDaniel as a Yankee. He spent most of his career with the Cardinals, but by this time he was in the Yankee system.

He's doing the tried and true fake windup pose in his card. 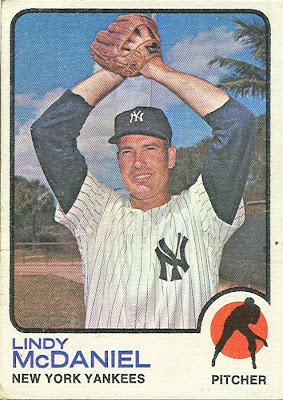 A strong chin, pointy little noise. He reminds me of someone.... 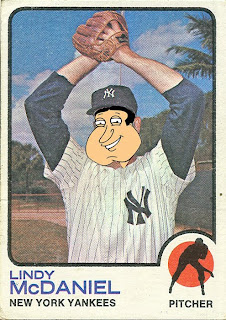 Can you see the resemblance? A little Quagmire-esque.

This post is all over the place, but I'm too tired to do a more thorough post on the 1973 set.

Let me know what you think of the '73 set. Oh yeah and as for the title. When I first starting writing this I had come across a Weird Al video that I thought was funny. I thought it related to the dirt that I found on the backs of these cards.

I was originally looking for the song "Riding Dirty", but found this one instead.

I can sort of see me as the "white and nerdy" guy hangin' wit my cards in the backyard. Just being white and nerdy. Mowing the yard and seeing my crumpled up card in the dirt. Rollin' on '73's. Getting durty wit the '73's. I'm actually too white for this song. I'm so white, I'm actually translucent. You get the picture.

Thanks for reading.
Posted by Jeremy at 6:51 PM 7 comments:

Well it's time for another installment of Retro/Vintage Saturday. I've done about 3 or 4 of these the past year and I'm going to wow you with another exciting blog post about my purchases. Whoo Hoo! I didn't have a chance to check out the flea market today, but I went over the fake card shop to get some supplies and random packs.

I'm never prepared to see box toppers on sale at this store. I should be used to it by now as I've seen (and bought)some box toppers on one other occasion. I really wish they would have these available more often.


One an ad panel. Not really vintage more like retro vintage or faux vintage. 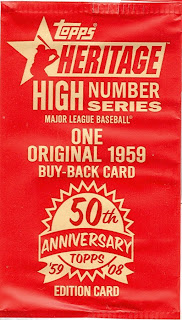 Pretty nice. I think I actually have owned or currently own these three cards. Now I have the uncut versions.

In fact, I think I have about 2 or three copies of the Clete Thomas card. Would have rather opened something with some players that I collect, but still cool.

Now for the buyback card.

A little worn, but still nice and firm. Not a flimsy piece of cardboard. 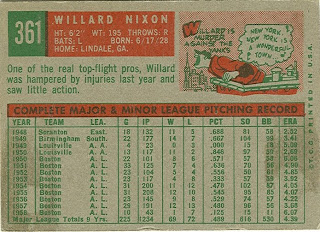 A little bit smudged, but that's okay. I've been slowly brainwashed by Topps to think that faux smudge cards ala Turkey Red, 206 and A&G are acceptable so I guess real vintage smudging is okay.

As you can tell from the cartoon he was a "Yankee Killer". He beat them 6 straight times in 1954 and 1955. According to his wikipedia article 1958 was his last year. 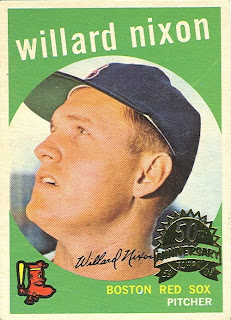 The front shows a pretty close up head shot though. Actually an extreme head shot.

It sort of reminds me of this old Buddy Bell card that I picked out of my parents attic last summer. This was one of the cards that I never got around to posting. 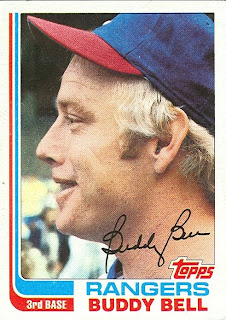 A little too close for comfort for me. Also technically more of a full profile pic rather than a slight 3/4 shot in the Nixon card, but close enough for my brain to make a quick connection. At least Buddy is smiling in his card; Willard looks confused or disoriented on his.


Thanks for reading. If any of these cards are something that you can't live without let me know. They're up for trade if anybody is interested.
Posted by Jeremy at 12:21 AM 2 comments:

Alright, here we are with the fourth and final installment of my first 2010 Allen and Ginter video box break.

I shot this one outside so the audio is a little messed up. I tried editing some of it for time constraints. I didn't want it to go to long. It's only about 5 minutes though.


Here is the breakdown of the last 6 packs out of the box.

Box Total = 175 Points plus whatever the Saltiest Sailors is worth. Not too bad. I haven't seen an official leader board yet, so who knows who is in the lead.

Thanks for reading/watching.
Posted by Jeremy at 10:35 PM No comments:

Alright. Here is my next installment of my Gint-A-Cuffs Box Break. I had some issues with the file size so I split it up into two parts. I didn't realize how dark it was so the cards aren't really in the light much, but I did add more scans and stuff to make it more interesting. I should have the last and final installment up this week.

Here is the pack break down.

Not too bad. I'm hoping that I can do better on the last 6 packs of cards.

Thanks for reading/watching.
Posted by Jeremy at 9:54 PM No comments:

Okay I've mumbled my way through part two of my box break.


I moved the camera a little closer and their are a few scans of cards. I really need to work on the enunciation thing.

84 points so far after almost half the box. This isn't looking good. I'm still waiting on some rulings for two of the cards that I pulled so maybe that'll bump up some more points.

I guess 84 points aren't too bad. I'm comparing it to last year when the high scores were in the 300's. I'm not sure if anybody has really run away with it yet.
Posted by Jeremy at 9:38 PM 3 comments:

Since I have been blogging for a little over a year now, I thought I'd break out the video camera and do a video box break. Or in this case a partial box break. This covers the box topper and packs 1-4.

A few things I noticed about this video once I previewed it:

A: I didn't realize that I had Shrute hair.
B: Lose some weight.
C: Enunciate or subtitle the video so that people can understand me.
D: Possibly hold the cards in front of the lens a little longer.

Despite those short comings, the video is some what entertaining. Not much going on, but maybe next time I can make it better.


Here is my scoring for the packs so far:


I think that makes 39 points so far.

Thanks for watching/reading. If you have any critiques let me know.
Posted by Jeremy at 5:13 PM 4 comments:

Theirs a cool contest over at: Coolio Cards.

He's giving away a box of 2010 Allen and Ginter to the lucky winner. Go check it out!
Posted by Jeremy at 10:51 AM No comments: