Joy of a Completed Page- Courtesy of Hey That's Mine blog 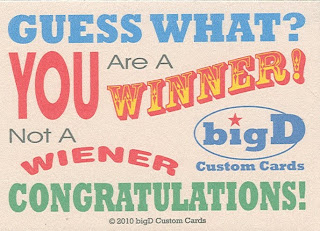 I'm really pleased with the way the card turned out.

I had requested an Adrian Peterson card featuring AD in his college uniform. 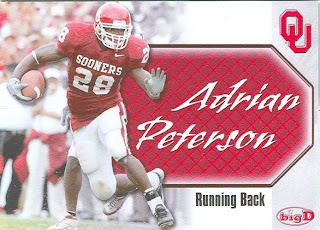 I was glad that their were no shenanigans regarding the uniform. Haha. I half way expected to see Adrian in a different jersey ala the Derek Jeter Red Sox fake error card from Heritage High Numbers, but thank goodness their were no variations to the uniform.

He made a joke during the contest that he might have to sneak a Longhorn in the card and he did. If you look closely at A.D.'s left shoulder you can see a Texas Longhorn logo on the helmet of the player trying to catch Peterson.

That means this photo was taken either in 2004 or 2006 as those were the years that we were the "home" team.

Also, it allows me to post up my first ever Joy of a Completed Page blog post: 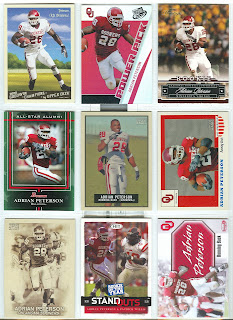 I have about 3 and half pages dedicated to Adrian. One for the Topps base, Upper Deck base and then one solely for the chrome cards. This page is dedicated to cards featuring the college uniform.

Thanks very much for the card, Big D. Many thanks for hosting the contest too.


Thanks for reading.
Posted by Jeremy at 7:02 PM 7 comments:

The past few weeks I've tried to fight off the doldrums in my collecting habits. I'm still going after some old stuff and not really into the newer products. I actually like the base cards from Bowman so I might have to buy a pack or two of those sometime. I haven't seen any series two yet, and I'm not so into Heritage or any of the other stuff out there now. I've tried breaking out of the rut and grabbing some lots off of ebay, but even that doesn't really get me going right now.

The best way I know to pull off the doldrums is to a little trading.

I came across a relatively new blog: Baseball Obsession-itis. and I asked if Kelly was interested in trading.

She is a big Boston Red Sox fan and had some cool stuff for me and I some random stuff to send over to her.

First off some 2009 Allen and Ginter. 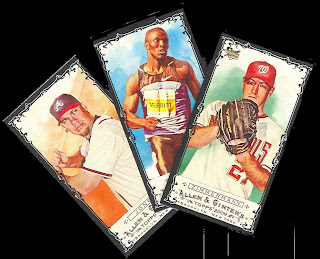 I'm still trying to finish off these black bordered minis. Occasionally I have second thoughts about trying to finish this set off, but I try to suppress the voices in my head as much as I can. 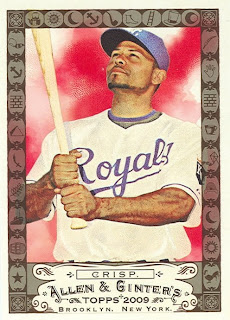 She also sent over a few code cards. I have quite a few of these,but not nearly enough for the whole set. I'm still iffy on trying to finish this one off. 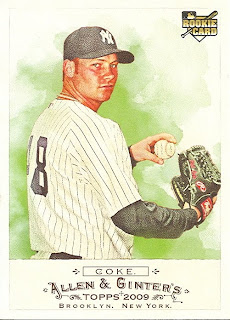 She sent over some base cards and some other A&G minis. I've spent more time tracking down the minis instead of focusing on the base set. I still need about 7 SP's and 3 or 4 base cards. This trade knocks down a few of those of the want list.


My favorite of the bunch is the Heritage card.

I've been coveting this card for a while since I've seen it on the blogs. 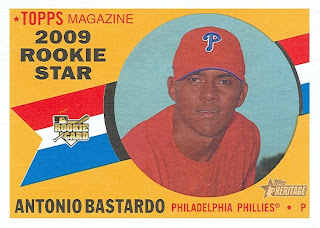 Pretty cool. This one's going in the wacky names binder page. I only have a few cards so far in that page. This will go after Felix Pie and before Oil Can Boyd. Nice. My first Bastardo! Hopefully they'll be more to come later. I might have to become a Bastardo collector. I think I've found a new put down for people: "you're a real bastardo."

I've got Ginter on my mind


That doesn't roll off the tongue like I thought it would. I'm not much of a lyricist. I really need to dig out the guitar and try to play some blues. It's been too long since I played. Playing acoustic guitar in a faux delta blues style and mumbling incoherently might work better than just typing out random Ginter inspired lyrics.


Wouldn't it be cool if they had a mini set or some base cards dedicated to the old blues musicians.
I did a couple of quick and dirty photoshop jobs in the new (old) Ginter style. 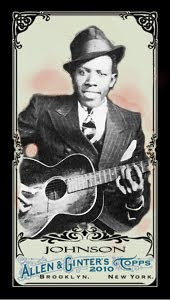 This one would be a lot better if I would have finished it, but you get the idea. Maybe a "Worlds Famous Musicians" or "Most Influential Musicians" subset written above the top would be nice looking. I'm too lazy and not quite talented enough to pull that off. 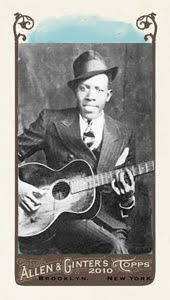 Oh crap! I forgot to put the little nameplate thing on the bottom too. Oh well.


I know one of the main reasons why it would be tough to do. Just doing a search for photos of Robert Johnson pulled up lots of interesting articles about copyright infringement and all sorts of copyright claims from heirs and supposed heirs and unscrupulous people taking advantage of people.

I really hope by lifting these photos for my blog I don't fall into the category of unscrupulous anii that are taking advantage of people.


Anyway, this is my long-winded way off saying that I've thrown my hat into the Gint-A-Cuffs2 Old Planter Boogaloo.

Good luck to all the other participants.

I have a real good feeling talking to you on the blog.(Elmore James lyric)

Thanks for reading.
Posted by Jeremy at 12:13 AM No comments: