Cards from Suldog part one

A few days ago I blogged about receiving a package from the legendary
Suldog. I say he's legendary because of his wonderful blog. I actually did go through the entire blog reading about the exploits of him and HIS WIFE.

He's a big fan of baseball and softball and has a variety of posts depicting his days as a manager/catcher for his softball teams. He's also a bass player. He seems to have had a much more exciting life than most of the people I know. Maybe it's in part to his writing that makes the journey through his stories so enjoyable. I don't know what it is. I know that it's a quality that I don't have, but it doesn't hurt to try.

He contacted me a few weeks ago about having some 1973 cards to help me out with my set. I found some stuff for him. Mainly Red Sox, Patriots and some other stuff. He's a big fan of the 1965 set. If you have a chance go read his Green Sox post. I won't ruin the story, but I feel like our trade was pretty much the same thing. A really nice gift. 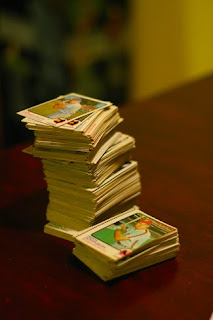 Since it was such a large stack I'm dividing the post up into a few parts.

1973 set is one of the first Topps sets to offer up action shots in the regular set along with the posed action shots. (1971 was technically the first, but action shots on a baseball card was a pretty new concept in 1973) I do a lot of action photography so I really like seeing action shots depicted on cards.

A mainstay of these cards is AL, NL and World Series highlight cards. Of course these are all going to be action shots. 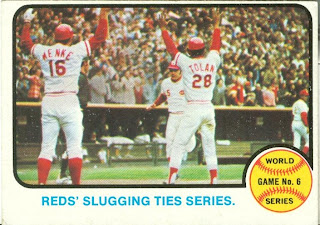 This is a nice one depicting Johnny Bench scoring a run to ties up the World Series in game six. The Oakland A's would win game 7 to win the World Series, but that doesn't matter to me. It is one of the cards in the set to feature Oklahoma's own Johnny Bench even if he is a little obscured by his teammates. 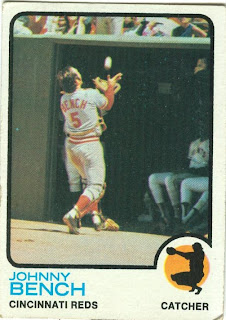 He also has a regular issue base card showing him in action. Pretty nice. Catchers have the best cards. 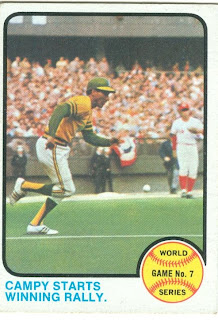 His opponent in the 72 world series was Bert Campaneris shown in this Game 7 World Series card. Another nice action shot. 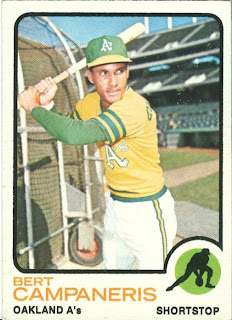 "Campy" would also have a regular issue base card. A nice posed batting shot. Normally I don't like the posed shots, but I'm warming up to them. After seeing this card I came up with a theory that older guys had better posed shots than the rookies. I need to do more research on this.

Both guys would have cameos in other players cards. 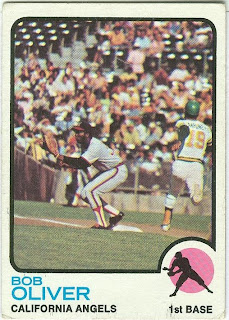 Campy running to first in this Bob Oliver card. With cards like this you have to look twice to see who it's supposed to represent. I'd like to think it's another Campaneris card. 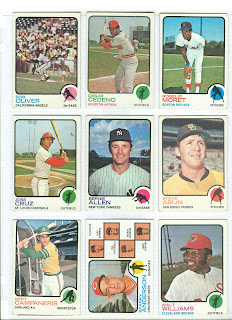 To show you how a real nerd stores his cards this is a binder sheet with 9 cards. These are arranged numerically. You'll notice the Bob Oliver (Bert Campaneris) card shares a page with Bert's "real" card. That fact will only seem cool and interesting to me, but I thought I would share anyway. 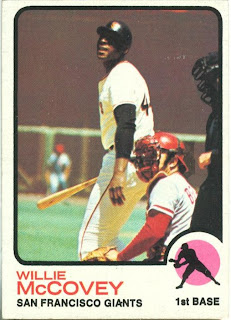 Here is a nice Willie McCovey card. A good player in his own right. The catcher making a cameo is of course, Johnny Bench. This happens a lot in cards, but it's a little nice when it's a player that you collect. Up until the trade with Suldog I only had a couple of Johnny Bench cards from his playing days.

In keeping with the action shot theme for this post I'd like to show off a couple of these stars. 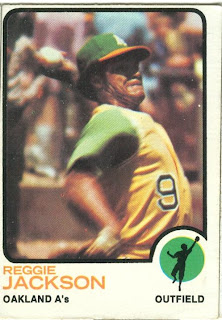 Reggie Jackson. (Wow, that's a lot of A's players in this post. In fact this is probably the most A's or Reds for that matter in one single post from me.)

Reggie's mustacheless in this shot. A little blurry, but a nice action shot. 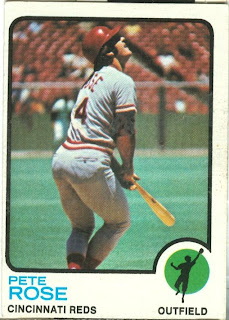 Since I'm on a Reds/A's kick today, I'll follow up with a nice action shot of "Charlie Hustle". He got that name from Whitey Ford as a sarcastic nickname. Rose liked it enough to keep it. 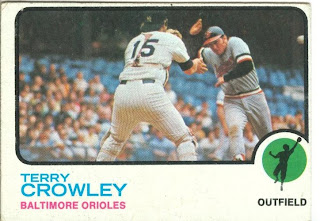 Here's another cool action shot with a cameo. It's got a Hall of Famer, the ball and .... Terry Crowley. I hope I don't offend anyone, but I don't know who the heck Terry Crowley is. I know Thurman Munson. For the non-baseball fans, he's the guy front and center (#15). Pretty nice!

I wish the composition was a little better. If the camera was panned a little more to the right their wouldn't be so much dead space on the left of the card. Also, we could probably see the ball a little better. It's going to always be a Thurman Munson card to me though.

I guess that's about it for this post. When I first started collecting this set. I was pretty sure that some of the cards would be pretty hard to find. Having someone take the time to send them over in a trade is really generous. Soon, I will show off some more nice cards from this trade.

Thanks for reading.
Posted by Jeremy at 4:28 PM 10 comments:

Normally I wouldn't do a birthday post, but when I came across the George Scott card the other day I knew that it would make for a good birthday post idea.
Normally these types of posts are the domain of Can't Have Too Many Cards, but I thought he wouldn't mind since it's also happens to be my birthday.

The problem is that I've been out of town and I've been pretty busy so I don't really have much to say about this card. Kind of a let down, but I didn't want the opportunity to go to waste.

I really wanted to do a post on how nice the Red Sox uniforms always look so nice on a card. I think the red letters really stand out on those white jerseys. The blue outline really helps to make the logo appear sharper too. This card isn't a good example of that, although the B logo on the hat really stands out. When I get around to scanning more of my 1973 cards I'll give a better example.

It should also be noted that Mr. Scott shares the same last name as me. Kind of a nice coincidence.

I really don't have much else to say. I did receive a nice early birthday present from Jim Sullivan AKA Suldog. He has a really nice blog wherein he talks about HIS WIFE, sports, politics, music and softball. He's a bass player and a catcher who is also a Red Sox fan.

We completed a trade recently. I sent him over the George Scott card above as well as some other cards he said he was interested in.

Here's a shot of the cards he sent over:

A bunch of 1973 Topps baseball for my set collection! A ton of really nice cards. Nice players, commons, action shots and team cards. Probably close to 200 or so for my set and another 60-70 cards that were nice upgrades to the ones I already had in the binder. I don't have enough time right now to show off the cards individually, but soon I'll be able to scan and show off the nice stuff he sent over.

Check out his blog sometime. It's a good read. I pretty much have retroactively read all of his blog posts from the beginning and he's had a funny and interesting life.
Posted by Jeremy at 2:17 PM 5 comments:

I've been wanting to do trade sketch cards for a while now, but I could never find anyone who seemed interested in art. Admiring art and art cards, but not actually producing them. Seems like lately there are a few people trying their hand at doing artwork.

I think it's cool even if people aren't so comfortable or confident in their talents. It's a lot of fun for me most of my life and I wish more people would try their hand at something creative once in a while. I guess writing and blogging is creative, but I mean more with the visual arts.

One guy that you're all familiar with is A.J. at the Lost Collector. I mainly remember him from his quest to collect one Yankee auto from every year of Topps. 1951-2011. Pretty nice collection. I didn't know that he was an artist too. The link above connects to his artwork. Really nice stuff. I don't remember how I came to find out he likes to draw, but I'm glad that I did. I asked him for a sketch card trade.

The card he sent over was a nice addition to my Gary Carter and Sketch card collection.

This card will go in the sketch card binder next to a couple of sketches from Lonestarr and a few that I did myself.

I don't have a lot of Gary Carter cards so this is nice. Especially considering him passing away last week. Thanks for the card A.J.!

If anybody out there wants to trade sketch cards let me know and we can do this!!
Posted by Jeremy at 12:51 AM 1 comment:

If anybody out there has any advice I'd would appreciate it.

Jeremy
Posted by Jeremy at 4:36 PM No comments:

Trade with $30 a week Habit

I envy people with a budget. Hobby budget, entertainment budget, actually any type of budget that allows them to purchase things guilt free anytime they want. I've flirted with budgets before, but I don't really stay with them. That probably explains why I go through big splurges of purchasing things and then long droughts of not having money. I'm getting too old to not allow myself a budget for purchases.

One guy who seems to have a nice budget for his card purchasing habits is Robert from $30 a Week Habit.

We completed a trade quite some time ago and in my usual fashion these days I'm procrastinating too much.

He sent over a bunch of cards mostly knocking off a bunch of A&G cards. I'm sure most of you are tired of seeing and probably collecting last years A&G so I'll keep it brief.

I was drawn to this Ciriaco card because of the cool bat in the cameraman's face pose. Green and yellow look good together too.

I'm not exactly sure why I picked this Jorge shot to show off. More of a candid rather than action shot. 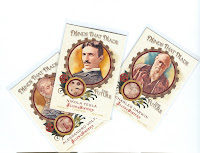 I'm sure I've complained about this before, but there are way too many inserts these days. I don't like it when the inserts infiltrate A&G. I like the subjects in the inserts, it just makes it way too hard to complete all the sets or even the main set. I don't have unlimited funds to make it happen. I'm off the Ebay thing these days so that's out of the question. So it's definitely nice when some inserts show up in the mail.

And lastly, a nice horizontal action shot. I'm contractually bound to show one of these in every post I think.


Thanks for the cards! I hope we can trade again sometime.
Posted by Jeremy at 9:24 AM 2 comments: