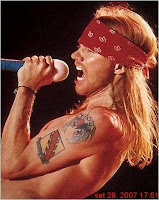 The Summer of 1987 I became a huge fan of Gun's and Roses. Their single Sweet Child of Mine was all over the airwaves and on MTV. I didn't have MTV in my home town, but my cousins did and I was staying with them for a week so needless to say, every waking minute I was glued to the TV waiting for that iconic shot of Slash plugging in his guitar and playing the opening chords to the song.

At that time i could care less about sports, sports cards or even comic books. I was entranced by this guitar thing and I swore I would be the next Slash.


Well, obviously that never happened. Actually I would spend the next 4 years or so (high school) trying to be Slash but it never worked out. I could manage a half-assed version of some of G n' R's songs, but I was a poor imitator of Slash's guitar work.

I was hoping the follow up to Appetite would be cool. Lies wasn't much of an album. A half live/half acoustic album it was an abbreviated stop gap filler before the "real" album was supposed to be released.

The grunge movement came and went and still no follow up. Seventeen years later Chinese Democracy was released and in true weirdo Axl Rose fashion it was only released online or Best Buy. I'm sort of boycotting Best Buy so that wasn't an option. Honestly by this time I didn't even really care that much. Seventeen years is a long time to wait for anything.

Going 3 months in between posting seems like 17 years in the blogsphere.

I hope my next series of posts aren't like "Lies"(abbreviated and thrown together) or the two Use Your Illusion albums. (self-indulgent and aimless)

The people that I've traded with months ago deserve better. They deserve an Appetite for Destruction, not an acoustic version of "You're Crazy". They definitely don't need a Chinese Democracy type of effort.

Speaking of crazy. I shouldn't have been so careless with opening the package that I received from Matt B. from the blog 26 Cent Summer. It was filled to the brim with a bunch of hard core guys from the past. Matt's blog title comes from his own summer spent collecting cards. The 26 cents refer to the price of packs in 1980. In the time it's taken me to finish this trade post he's already finished his 1980 Topps set. (I'm still working on mine)

Let's see what sort of doubles he had to send over:

I recalled that Fergie had an Oklahoma connection when I was bored and digging up info on him. I found this touching article in an old SI article: Glory Amid Grief

This is probably the most angriest player photo card that I own. At least George isn't staring us down, he's looking at someone off camera. I've never been more scared to look at a thin piece of cardboard in my life. I can see now why he's a part of the badass and you're not club.

Even though this is the only Rollie Fingers card that I own, it's still a little weird that he's in a Padres uniform instead of an A's uniform.

Ladies and Gentlemen I bring you the 1980 Mets!! The last place finishers in 1979 would be in rebuilding mode with new owners Doubleday and Wilpon. Due to a last place finish they would have the first pick and would use it to draft Darryl Strawberry. Six years later they would win it all with a little help from the guy below:

Here we see a youthful Keith Hernandez in the batting cage. The mustache looks smaller and more youthful too. He said that combined with his high cheekbones and large mustache he didn't have to use eye black while playing baseball.

He has an Oklahoma connection in that he played with the Tulsa Drillers before being called up to play for the Cards. He would also split the 1975 season between St. Louis and Tulsa.


I'm still needing about 18 left to finish the set, but I'm gettin' there.

Obviously a good trade. It's always nice to find some one with the same collecting goals as you so that you can help each other out.

Thanks very much for the cards Matt. I enjoyed reading your blog.
Posted by Jeremy at 4:14 PM 1 comment: