So I watched the OSU and Texas game tonight. This is kind of a weird game for me to watch because I don’t really like either team.  Texas is our main rival and OSU thinks that they are our main rival.

Normally I would route for a 0-0 tie, but I found myself enjoying the game. The lead changed several times and it turned out to be a pretty high scoring contest.  Every time I would yell at the TV; “don’t let them Longhorns score!! You idiots!” Then I would realize that it’s cool that for a moment OSU was losing. Around a minute and a half later OSU would score and I’d yell “don’t let them stupid hillbillies score!!” and then I would realize that it was cool because that would mean that Texas was losing (for a minute) Rinse and repeat and you have a final score of 41-36. Texas over Oklahoma State.

Texas scored with about 33 seconds left in the game. When I turned over to the game in the third quarter I was surprised to see that Texas was losing the rushing battle, because every time they had the ball they seemed to be running the ball well with two different backs Bergeron and Gray.  Occasionally they would do that stupid wild cat thing that seems to be all the rage.  OU looked to be doing a version of the wildcat in 2009, but Bradford got hurt, Offensive Co-Ordinator Kevin Wilson left to coach Illinois and we never saw the wildcat again. (thank goodness!)

The best news for OU is that we were off this week.  Our last game was a loss to KSU at home. Even when we are bad we could always say that we almost always win at home. Only 4 losses in 13 seasons, now make that 5 losses in 14 seasons and we’re only 3 games in.  OSU and Notre Dame both visit Norman later this year and they’re both better than we are right now.  For that matter Texas is better than we are too.  That’s a hard sentence to write.  The one thing I can say about Bob Stoops teams is that they usually get better as the season goes on.  Hopefully that will be true this year.  We really don't have far to go to get better, but whatever it is doesn't seem to be obvious to our coaching staff. Or at least they aren't telling us what's going on. 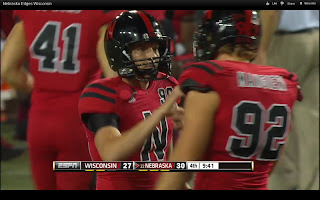 I never thought I had seen a more crappier uniform than the ones worn by Nebraska tonight. 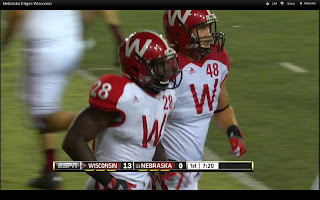 A few seconds later I noticed that Wisconsin was wearing basically the same thing.  Awful. Truly awful.  I don’t really like the Nike monopoly sometimes, but these Adidas unis look like the most mismatched horrible idea ever. Most of these newer uniforms are starting to look more like costumes rather that uniforms.  A costume is a ficticious element of replicating reality. (I must really be getting tired) Retro uniforms are usually pretty cool though. Bring back true uniforms!!The funny thing is; Nebraska and Wisconsin already wear retro style uniforms normally. Why bring out all the craziness! 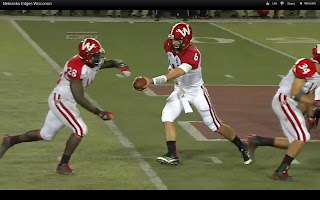 Number 22 ranked Nebraska got a nice fumble recovery from Monte Ball with 1:11 left in the game to preserve the win.  The above screen shot is from the hand off that Monte didn't quite hold on to that led to the fumble.

I'm officially done with this installment of the college football roundup. Not much of a roundup, just me complaining about a couple of games that I watched.  Next time I promise I will be writing about cards.

Posted by Jeremy at 1:40 PM No comments: 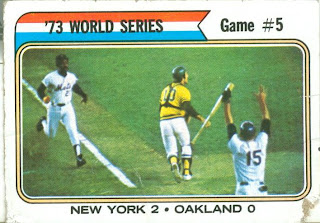 Picking through the cards at yard sales. flea markets and dime boxes at the local card store will sometimes yield some really interesting cards. Not the typical type of card in that it's of a nice player or because the photo on the card is cool or funny looking. Like most of you I also run across those types of cards.

I'm mainly talking about the cards that no matter the subject matter have obviously shown some wear and tear and in my opinion lots of love.

I used to not think that way. I would see a card like the one pictured above and assume that the previous owner or owners hadn't really taken care of it.

I should have known better; when I was a kid I collected comics. I knew some people who would buy two copies of a comic; one for the bag and board to be protected and never enjoyed and the other copy to be read. I never did that. I kept most of them in the bag with a cardboard back to try and keep them new, but I knew that they wouldn't be worth as much to anybody as they were to me. I used to read those comics all the time. They're a little worse for wear these days, but I still have them to read. They didn't suffer much. 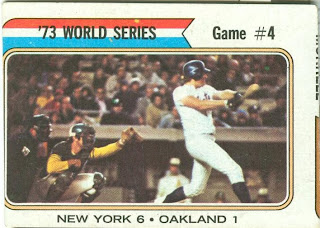 I'd like to think that these cards that I come across these days are from the same type of owner. Maybe I'm wrong, but it's a new positivity thing I'm doing these days. Trying to look on the brighter side of things and all that.

Maybe I'm wrong and the former owners of these cards were all Mets fans and were taking out their frustrations on the cards that were reminding them of a not so distant past in which the Mets got to the World Series and lost. Maybe the owner just hated the Mets.

I didn't really follow the 1973 World Series much though as it was played in October 1973. Since I was born in March of that year, I really didn't have much of an interest in the game.

So when I find these 1974 world series recap cards I always pick them up. It's a start of a new collection in which I try and get the championship highlight cards from the previous year.


These 1974 cards first caught my eye because of the patriotic colors and the action shots. I've run across more of these action shots from other sets that I hope to get around to writing about. I'm not so sure how far I'll go with this type of collection, but I really, really want to eventually find the rest of these cards from 1974. I have 3 so far and all three have some sort of damage. 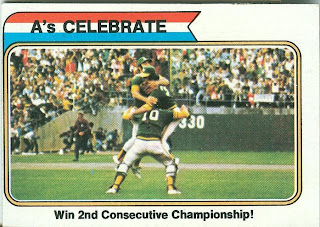 When I found the first one at the flea market I vowed to find all 10 of them and upgrade this particular card. Now I'm thinking that I'll just try to complete this "set" and if it turns out they are all in damaged condition or miss-cut all the better. I'm not going to be worried about condition to much these days.