In terms of my card collecting hobby I sometimes wish I had the resources to buy up a little bit or a lot of everything. Mostly I need to collect what I really like and worry too much about my hobbies.

One thing I have to be thankful for is all of the cool packages that I've received in the past year. Unfortunately I haven't gotten around to writing about these package. I have and continue to enjoy the cards, but I haven't done a good job of getting those trade posts.

A few months ago (I'm really, really late with some of these posts!) Joe from ...the Sandlot

Takahashi doesn't currently play for the Mets, he's in Anaheim these days, but I have always liked this card. 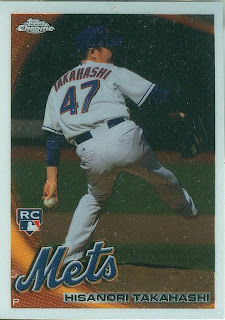 First of all it's chrome, it's a Met and even though I usually prefer action shots that show a player's face sometimes it's nice to see a shot from the back that shows off the name and number of the player. I have a lot of Asian friends and so I have an interest in players from that area. 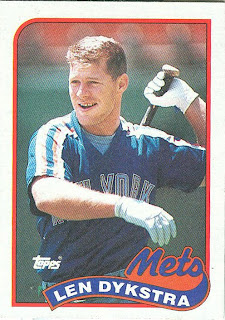 I think this is one of only a few Dykstra cards that I own. This may have even been the first Dykstra card that I had in my collection. (I have a couple of more now.) '89 Topps has a nice design. 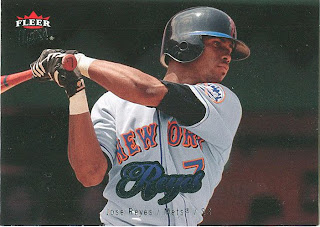 This cool shot of Jose Reyes is not one of his best cards, It's still a nice card though. It's another post I have for later. 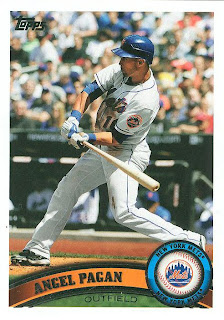 Even though this is a Met, the Pagan card is already in the 2011 Topps Baseball binder. (not the official one, just a generic binder) I'm paring down my collection; if I'm collecting the set I'm not going to do a separate team set, just keeping a few players for their respective pages. If I'm not collecting the set then I'll just do the team set. 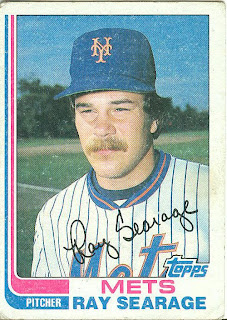 That's the case with the Ray Searage card. Currently it's in the Mets binder, but whenever I get around to seriously collecting the 1982(if I ever do) then it will be donated to that binder.

I find that when I either don't have the money or interest in buying new stuff reorganizing binders and boxes can be pretty fun in a way.

If you're still reading this: Happy Thanksgiving everyone! It was a pretty short post, but at least it will be a break from arguing with your family about sports, religion and politics.
Posted by Jeremy at 12:44 PM 2 comments:

Growing up my family used to always complain about me "havin' a one track mind". I guess once I get something on my mind I can't jump over to another subject without finishing what I've started. I thought I had outgrown that habit, but apparently not. One of the reasons I haven't been posting lately is that I feel like I should finish up my trade posts before blogging on other subjects.

If I were a little bit more creative in my writing, I could somehow combine the two together. Maybe I should take a creative writing course to get my head right. And it's not just that I want to get to the trade posts, it's that I want to do them in order that I received the packages. Even though it's been months, I still have all of the folders in some sort of order with the cards that were sent to me. So I've got this stubborn idea that everything should be linear, but I don't really think in a linear way anymore, but I'm forcing myself to behave that way. So in the spirit of trying to shake things up I'm going to jump ahead and focus on a package that came my way a few days ago.

I hope you'll forgive me past trading partners, I promise I'll get to all the cool packages that I've received from you guys when I get over this procrastinating hurdle.

Kyle from the Juust a bit outside blog contacted me about having some Allen and Ginter cards off of my want list. My want list for this years A&G is extensive. That's another thing that I've procrastinated on as well. It's hard to get excited to collect a set that doesn't really grab you. Add a bunch of inserts on top of a somewhat weird base card design and it makes collecting the whole set a little daunting. Of course there's no law that says I have to collect any of it, but I'd like to have every A&G set from 2006 on in my collection.

I'm doing pretty good in that regard. I'm only needing one short print for 2009, a couple of base for 2010 to have most of 2007-2010 locked. (If you've been following this blog for a while you'll notice I've conveniently left off the black bordered minis from those collecting goals. For now I'm pretending those don't exist. Sort of like how I'm pretending that Kimball Champions 101-150 don't exist. Because if they exist and they look cool, I'll have to collect all of them.) Also, I haven't really gotten around to the 2006 version of Allen and Ginter yet either. That's for another day.

One of the nice things that I do like about this years set is that they put team logos on the bottom border of the card.

Verlanders' follow through motion is made for a horizontal card.

If it's a non-baseball subject they put the groovy looking A&G logo in the bottom right of the card.

I already pulled a Hope Solo out of a rack pack, so this is my ohh la la! moment. You guys are all probably sick of these cards already. I'm a little behind schedule when it comes to this set.


The amount of subsets is crazy big this year. And I mean that literally.

You've got your Floating Fortresses cards in a full size card, unlike a few years ago when they were represented in mini form in the Topps Mayo line.

I like the rope border around the nameplate and card. I think bigger cards work better for this subject. Maybe my eyes are just getting tired and old, but I like that they can show the art work better on a bigger card. I mean how could you have a Floating Fortress on a mini card?

You've got your standby sketch highlight cards. The few of these that I've pulled look pretty good this year.


I still love the minis though. I still think that one of these days I'm going to have to invest in a lighted magnifying glass to enjoy them fully.

I thought the "Poe Toaster" was a piece of toast with the image of a raven burned into the bread. Turns out its a dude that will use any excuse to drink in a cemetery. Or maybe he's just pouring one out for his homie.

The borders on all these A&G cards look really nice. I especially like the Topps logo stuff on the bottom of the PP card.

This is the first Portraits of Penultimacy and World's Most Mysterious figures cards that I've seen in person.


These cards are all from Kyle(obviously) and he's got a group break going on right now. I haven't done a group break in a while, so maybe it's time to try my luck at getting some cool cards that I need. He's still looking for some takers so check it out.

Thanks for the cards Kyle. I really do enjoy them and it gets me a lot closer to feeling like I'm accomplishing something.
Posted by Jeremy at 9:46 PM 4 comments: