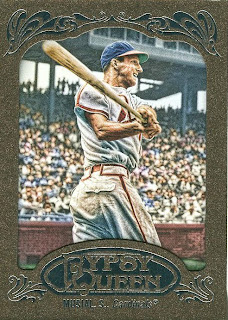 I haven't bought any new cards recently so I was a little intrigued by all the talk surrounding Gypsy Queen. I didn't really buy much GQ last year. I only picked up a Mets team set last year on Ebay. It seemed nice, but didn't really do much for me.

I really do like retro sets featuring new and retired players especially when their are minis involved. GQ seems to have all of that so I thought I would give it another chance.

I was a little surprised that the Wal Mart only had the 3 pack rack pack things and blasters. I don't know if that's the new hip cool thing in card collecting these days. In the past 4 months or so it's pretty much been vintage card buys for me so maybe I'm out of the loop.

Funny how the world turns all topsy turvy when you get out of the mode of collecting. Let's see what this rack pack has to offer, shall we?

It's going to be a short post so I'm not going to show off all the cards, just the few that I like. 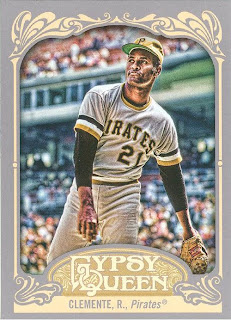 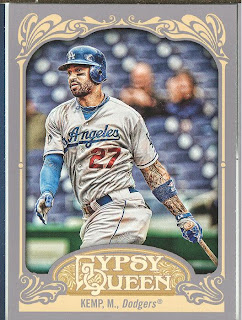 and a Matt Kemp. I don't know exactly what filter or filters that Topps is using these days, but it looks a little like HDR to me. I think that's why details like Kemp's tattoo is so weird looking. At first glance it looks like a robot arm.

I pulled one Moonshots(Frank Thomas) and one Sliding Stars (Nyjer Morgan) , but I'm too lazy to scan and post them up.

I pulled a Hallmark Heroes of Ernie Banks. 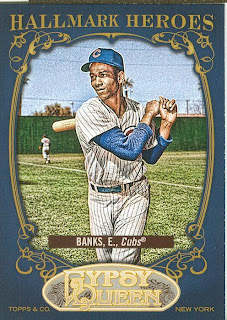 The blue border with gold accents is nice.

Now for the minis: 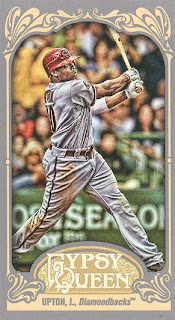 The first mini was a Gypsy Queen back Justin Upton. 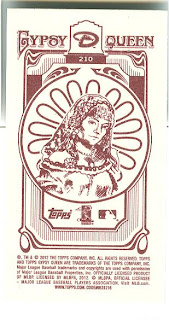 It'll probably go in the Frankenmini set that I'm working. I think Dayf should trademark all of his card collecting terms.

This will definitely be a keeper. 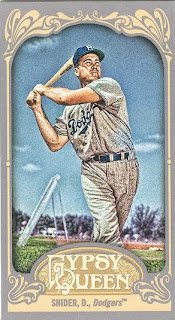 A mini of Duke Snider. 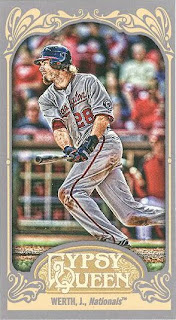 And a short print Jason Werth.

Last year I remember everyone going crazy over the framed parallels. Since I never saw any in person, I had no idea what they looked like. The scans didn't really excite me. 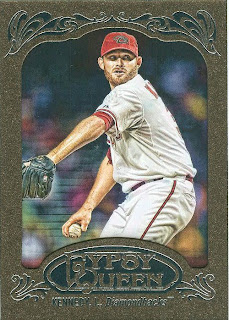 In person they are really, really nice. I'm not up on all the different framed parallels so I don't know if this is the only one (probably not) or if it is a retail or Wal Mart retail exclusive. It really doesn't matter as I'm not going after this set. 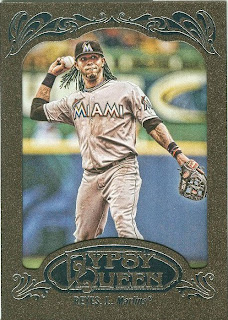 This is my first Jose Reyes in a Marlins uniform. Sucks, but it will probably go in the binder with his other cards of him that I have.

The sparkliness of the borders are a nice contrast with the flat card underneath.

Something's not right about the silver foil surrounding the card though. It looks a little 2-d for the rest of the card. I think it needs a drop shadow or an indention on the Gypsy Queen logo on the bottom to make it look a little more finished. The color and design is cool, but the foil looks a little cheap for this parallel. Having said that, I would still like to find some more of these with players that I collect.

Overall it looks like a really nice set. The inserts are nice, but too many off them. I really wish Topps would release one set a year without a bunch of inserts. It might end up being a boring offering, but then again maybe it would make it easier for set collectors to buy some retail occasionally and actually finish a set.
Posted by Jeremy at 12:19 PM No comments: