One my favorite things about Allen and Ginter is the non-sports subjects in the set. Actually it's probably one of the main reasons why most people like this set so much. I've neglected this years set as I've been mostly focused on collecting and blogging about the 2009 set.

As a guy who likes to paint and draw I especially like the artists that are included in card sets.
This past year A&G had at least one artist included in the set by the name of Leonardo da Vinci.

I did a similar post last year with the inclusion of Vincent Van Gogh. I'm not sure if I can go too in depth in this post as I'm more of a fan of Van Gogh's work than I am a da Vinci fan.


One of his most notable paintings is the Mona Lisa.

Nobody knows who "Mona Lisa" really is, but people have a lot of different theories on who it might be.

Some people have theorized that it is basically a self portrait of Da Vinci as a woman.
I'm not sure if that was a conscious decision or just a case of how artists sometimes subconsciously or consciously paint a self-portrait of themselves when they are doing a portrait of somebody else. I don't know if I necessarily believe that in this case, but I have noticed that sometimes painter's styles seem to favor a particular body and facial type.


Here is another shot with the two faces superimposed on each other. 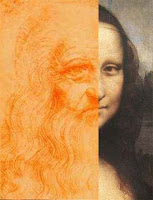 You can decide for yourself.


Another famous painting is The Last Supper.

Which has something to do with the DaVinci Code movie which I still haven't seen.


He was a student of human anatomy as well as the anatomy of birds and how they fly.

He was not just a painter but also a scientist, mathematician, engineer, inventor, anatomist, sculptor, architect, botanist, musician, and writer.

The most interesting invention of his is that he invented the human powered Ornithopter. 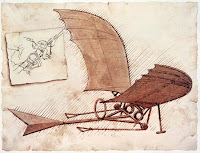 As you can see that it's basically an aircraft based on the anatomy of a bird.

Here is a nice sketch of the wings. 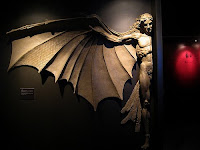 This is a really nice shot I found on flickr from photonquantique. He graciously allowed me to use his photo from the exhibit: From the Mind of Leonardo. A look into the exhibit can be found here:

The Mind of Leonardo

Check out Photonquantique's Photostream sometime. He's got some nice photos in his flickr.

You can see from this sculpture how the wings that da Vinci conceptualized influenced another artist by the name of Bob Kane.

You might know him as the creator of Batman. He used these sketches as a design motif for the cape that Batman wore. I don't think of Batman as a flying super hero, but apparently in the first versions of the comic the wings gave him the ability to sort of fly.

This is a cover from Detective Comics #27, which is the first appearance of "The Bat-Man".

No one benefited more from da Vinci's inventions than the genius himself:

Here is a perfect example of the genius and his contraption in action.

Thanks for reading. I hope everybody enjoyed the post.
Posted by Jeremy at 6:49 PM

I enjoyed it. That sure is one long path for a post. I'm glad you shared it with us.

Thanks for reading. I'm glad you liked it. It started small and got a little out of hand.

This is a some good information. It is discripive. I'm glad you did some research about his Human Powered Ornithopter. I never really knew about the Batman thing.

It is great that you stated that fact.

I read your blog!