Theory and Practicum and hobby shops

Having a rare Sunday afternoon I continued my quest of finishing (or in my case starting) the base set of '09 A & G I set out for the hobby shop. The "real" one was closed so I headed over to the other shop. we'll call it the "lesser" hobby shop for now.

I've been buying loose packs from the "real" hobby shop because I when it first came out I didn't have the money for a Hobby Box and I really wanted a few packs to start out with. I ended up buying 16 packs from the same guy figuring that they were all from the same box. The theory worked well; out of 16 packs I only had 2 Ginter code parallels of cards I already own, with no other duplicates. The hits were few but I got a lot of base cards to build my set.

I thought that next month after I had taken care of the unexpected crap that drained my money this month I could pick up a box next month. I realize I've spent the same amount of money so far on loose packs as if I'd just bit the bullet and gotten a box in the first place. That's the downside of being impulsive, cheap and stubborn. We all can't be perfect, right?

The "lesser" shop has slightly lower prices, but after 4 packs of cards I came up with 10 duplicates. Crap! I guess my theory was somewhat right. I should've stayed with the "real" shop. I guess I shouldn't complain, it seems other people are getting a lot of duplicates in their boxes as well. My little stack of ten cards doesn't seem so bad after all.

I was able to pick up a couple of hits.

A nice Cat Osterman base card. I've been wanting this card for a while. I like softball players and I've always like her even when she was at Texas. 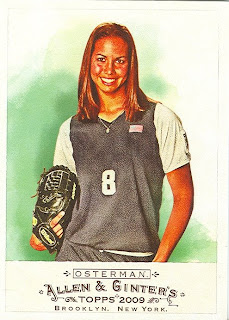 It's really tough for me to admit that as I'm an OU fan. Actually I only have two favorite Longhorns, the great Earl Campbell would be the other one.

Cat's in town this week as a pitcher for the USA softball team. Doing quite well too. I should've went by there Sunday to see them play at ASA stadium in the World Cup of Softball.

I also picked up this silk card. 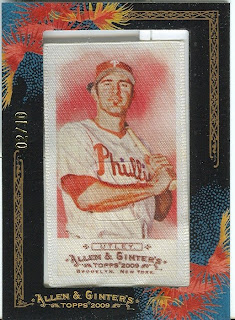 It's really nice, numbered 2/10. I thought I'd never be able to pull one of these. Kind of cool. I'm not sure how much it's worth, but it goes well with my signature card and relic card from the '09 set.

With the two dollars I saved on the discounted A&G packs I picked up another '09 series one pack hoping to get another Turkey Red for the completion of that set. I have another theory on which Topps series ones have Turkey Reds in them, but I haven't fully tested it out yet. I'll keep that for another post.

I pulled another Met. 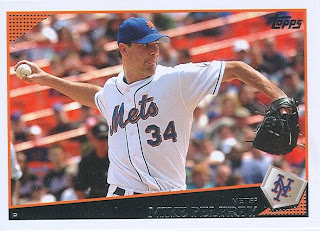 This is nice, a tight horizontal shot. This is definitely a hit for me.

And I pulled a Mathewson Turkey Red. 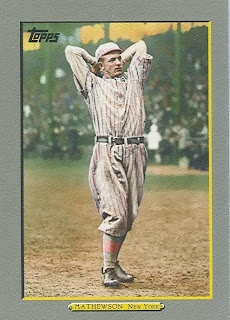 So far the Turkey Red theory is working.

As always you can check my trade/want list over at noone'sgoingtotradeforthis.

I'm updating it somewhat frequently hoping that some one out there might need what duplicates I have.
Posted by Jeremy at 10:16 AM

Utley card is a nice pull. I pulled a silk card from last year's A&G from a hobby shop pack. It was one of my better pulls of the year.

I'm really glad I got it. It makes me want to go back for more packs at the "lesser" shop. In theory their should be two more hits in the box. I just have to find them.