The life of a roving freelance photographer takes unique twists and turns in the types of gigs that comes your way. 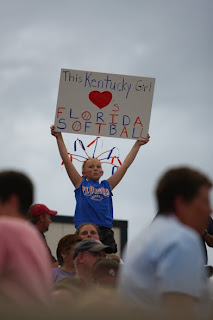 I was fortunate enough to be able to cover the 2009 College Softball World Series in OKC.

I haven't covered a lot of postseason college games, and I had only been to this stadium a few times for high school championship games so at first it was hard for me to find my way around the media trailer and of course stay out of the way of the TV guys.

I was rooting for the University of Washington mainly because I developed a slight crush on their pitcher Danielle Lawrie. 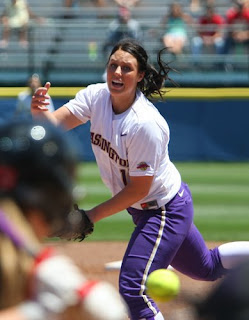 I'm hoping that doesn't come across too creepy or stalkerish, but actually they were a fun team to watch and since OU didn't make it that far I needed some team to follow. 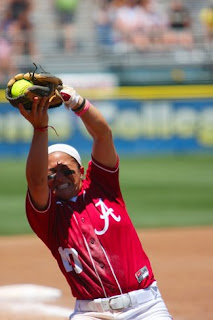 This shot of Kelly Mantalvo always reminds me of Luis Castillo. Except that she actually caught the ball. And she plays a different position. And she didn't let the glaring sun keep her from making the out. 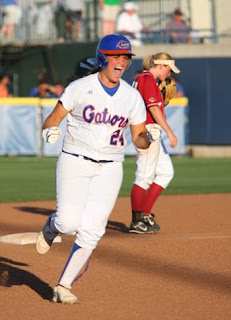 I really like this shot, but it didn't make the cut simply because it's a little out of focus.
These are the types of cool PJ action shots that I always see in magazines and newspapers that I try to emulate. So far I haven't been able to quite get it right. 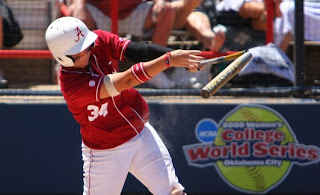 Charlotte Morgan breaking her bat during a game between Alabama and Arizona. 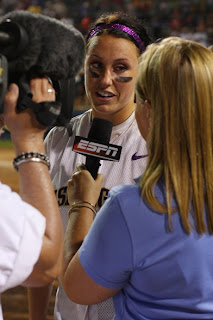 Congratulations Huskies!! This shot of Lawrie being interviewed after the championship game is a little too tight, but oh well. It was a little chaotic on the field after the game.

I can't believe the amount of old photographers trying to hit on Holly Rowe all week. Talk about creepy! 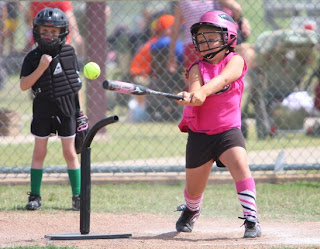 A week later I would cover the other end of the softball world with a tournament in little Chickasha, Oklahoma.

I'm too lazy to round up the photos I took of the Under 6 group, but here are a few of the Under 8 group I believe. 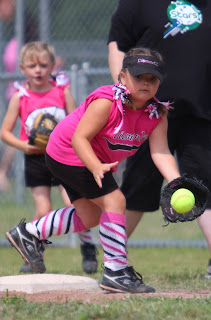 Kind of a busy background, but I love the amount of concentration the kids put into playing ball. 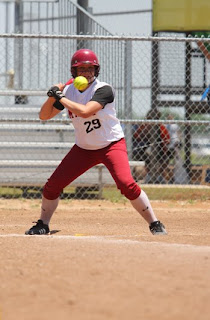 Here's a pretty pedestrian vertical shot of a batter. 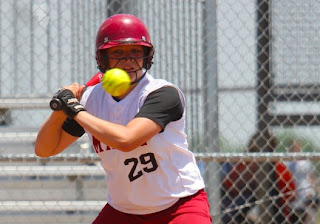 Cropped horizontally and a lot tighter brings the focus more to what I think makes the photo standout. I think it's not quite there, but still a nice
shot.

I'm always surprised that these softball pitchers get completely off of the ground before their release. 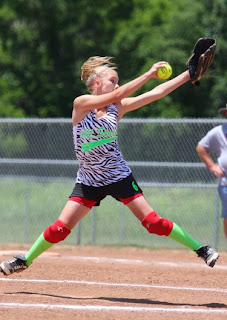 Again, not the greatest shot, but it shows her completely off of the ground and I like the shadow that she casts on the ground.

As always any questions, comments or critiques on my writing or photography or photoshoping is always welcome.
Posted by Jeremy at 1:53 AM

Based on a recommendation by the Night Owl, your site has now been added to the Sports Card Blogroll.

Cool. Thanks Night Owl and thanks JayBee Anama.

I absolutely love competitive softball. One of my favorite sports to watch.

(And as a sports reporter, my absolute favorite sport to cover above anything else).

Holy cow! Man, some of those are fantastic! The broken bat is very cool. And, come on, who DIDNT crush a little on Lawrie?? :-)

Thanks Dave for the compliments. I think most of the older guys there were more into Holly Rowe, but not me. Lawrie was a great player to watch.