For this entry I thought I'd switch gears from the retro sets and look to something that is a current set. Or at least current to me. I have only started collecting in the last month and when I started collecting again Topps 2009 was the most obvious choice as it's easily found at Walmart and Target as well as hobby shops. I like the base set a lot and I think the Turkey Red inserts are cool. I think the simplicity of the design is what I like the best. It brings more focus to the photographs instead of autographs and jersey relics.

I want to focus on the cool photos of pitchers that I own. I don't have the complete set so there are probably some that I'm missing, but these are my current favorites. 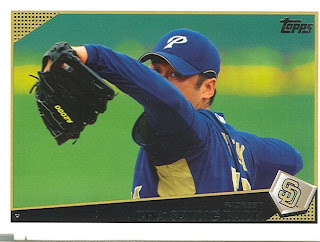 This card is nice because of the way his face is covered by his arm. I think he might be wearing a batting practice cap so we might be dealing with a pre-game warm-up photo.

These three shots are nice close up shots of pitchers. I like the first one because Lowry looks to be contained in the border of the card straining to get out of the card. It might not be obvious at first, but this shot also includes a ball. It's not flying through the air like in a typical shot, but clutched in his hand behind his back. The fact that you can see his name on the back of the jersey as well as the team name on his chest in the same shot makes the photo great.

Ricky Romero's expression is cool in the second one. The ball coming towards the viewer is nice too. You can almost imagine what a cool batting photo this would look like if he was in the same position just holding a bat instead of a glove.

The ball in the Voloquez card is placed a little awkwardly, but the expression and the gold chain really makes the shot more dynamic. I think athletes wear way too much jewelry, but in this shot it really enhances what could have been a typical pitcher photo. 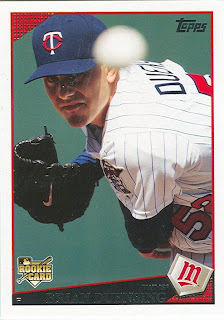 This is really nifty. Look at his eyes following the ball.

Verticals are always cool in my book. 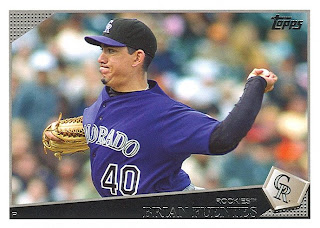 You can see the full extension in these two shots that show a lot of movement and space. 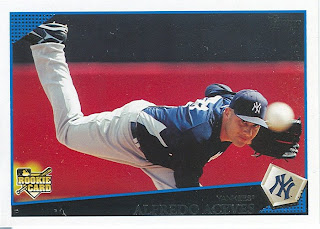 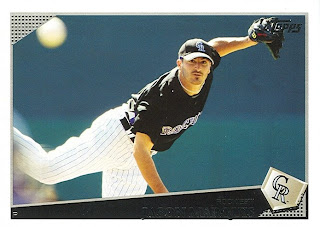 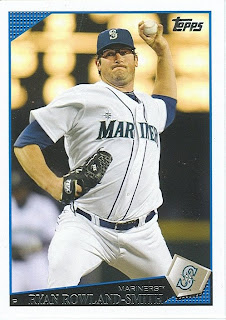 Just a lot of Shadow/Hightlight filter. 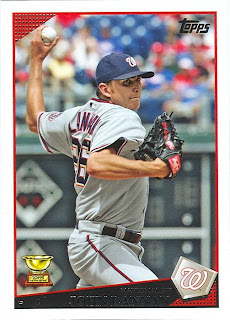 This is my favorite pitcher photo of the set so far though. 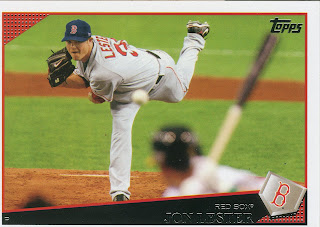 The three levels of depth included in the card is nice. The out of focus batter in the foreground, the ball and the pitcher in full extension.
Posted by Jeremy at 12:56 AM