Like most of you, I'm pretty excited to see that the 2009 Allen and Ginter have finally starting hitting the shelves. I finally got around to getting my first packs. I wish I could afford a box of the stuff, but I'm a little broke right now, so I settled for just a few packs.

I really really really like these cards. I think mainly it's because the backgrounds have more color to them and the players don't look too washed out looking.

Take this Jermaine Dye card. This card would seem so out of place in a "normal" card set. I can imagine a deer in the headlights expression with a bright flash in his face with a forced pose. In the A & G card it looks like he's posing for an official portrait. Like he's the head of state or something. Distinguished and comfortable for a typical posed ball player card. 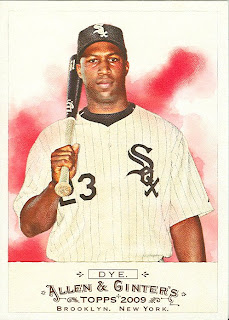 I knew this years set would be good for me when I pulled my first card. 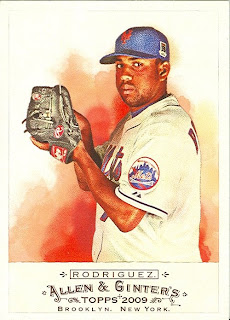 
I also got a Johan. He looks pretty demonic though. 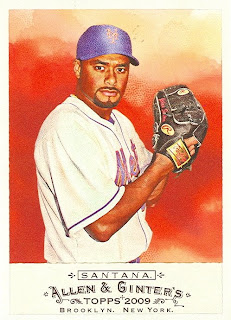 Maybe it's the red background, maybe it's the goat-tee. I've always equated goat-tees with bad guys or evil twins. 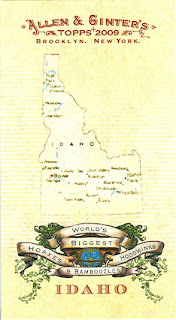 I also got an Idaho mini. I have a feeling when George Willing was asked what the name of the new territory should be he probably thought in his head "I don't know" which he made into Idaho and then lied about the meaning/origin of the word.

This guy is cool. Any historical people included in this set are cool in my book. 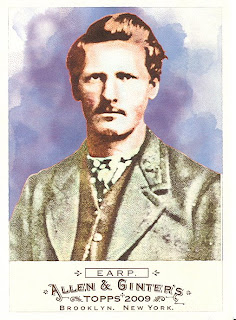 These guys are cool. (I use "cool" to much, I think it's a symptom of Ginter-fever.) 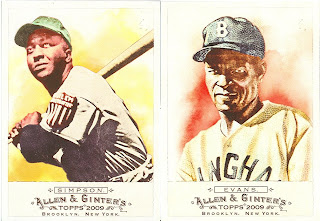 I wanted to put them together. I think they look cool this way. I love that Simpson is looking off into the distance with the bat and they included a golden background behind him. Sort of like a sunset. 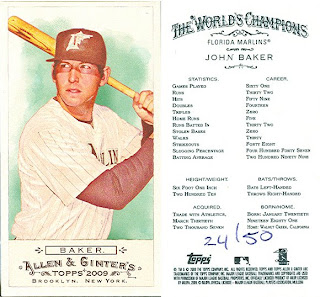 I received my first numbered mini. It's kind of cool that they're hand numbered, but I wonder how many people saw that at first and wondered "who the ^#!#!!? wrote on my card!!" I didn't. I swear. 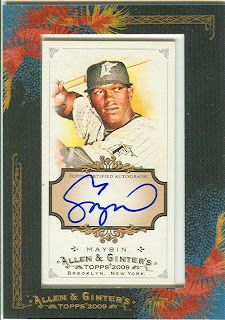 My first autographed card. Again, I hate to be so stupid, but I don't know anything about the Marlins and my only two real hits were of Marlin players. I'm not being ungrateful, hopefully the more I buy the better chance I'll have of getting something better. That's what all addicts say at first, right?

All in all I was happy with my cards. I was a little worried at first because it seemed like maybe they were all pre-searched. I had never been to this hobby shop before, but they definitely have a huge selection of cards and I didn't get shorted on my packs like some people did.

I think the best thing about these cards is that it seems like the players included have now hit the big time. When I look at them, I imagine that their's an old camera with the gunpowder used as a flash with the cameraman under the sheet.

He takes the photo and then an overweight manager with a cigar steps out and shakes the player's hand and says something to the effect of:

That's how I feel right now, like I want to go out and complete the whole set. I haven't tried to complete a set of cards since the Garbage Pail Kids.