About a month and a half ago I had the bright idea of possibly offering baseball cards to potential customers as a bonus to the basic photo package. My theory is that nobody else was really doing them, and maybe I could do it better.

After a few searches on goggle, most of the searches came up with card blogs.
I didn't realize their were so many bloggers out there who were actively blogging about card collecting.

All three of those blogs give me insight into the world of collecting and the wide range of what the hobby has to offer.

SCU gives me insight into the world of collecting that I have no experience in; the high end card sets with auto's and relics. It's nice to see what those guys pull, but I'm more of a basic Topps guy. I guess I'm a first worlder, and I'm happy with that.

Night Owl reminds me of the era of cards that I collected as a kid. He has a wealth of info on the older cards as well as the new ones.

Wax Heaven is nice for the new product updates and of course the contests that I have no chance of winning.

I quickly turned that mild interest in card design to checking on the blogs almost every night.

Obviously just reading about the cards wasn't enough, I had to go out and buy the product to make my own judgement on what the cards look and felt like.

I was so curious about what each pack of cards had to offer that I bought a bunch of different packs hoping to find something worthwhile.

I basically pulled a bunch of crap with a few highlights thrown in. 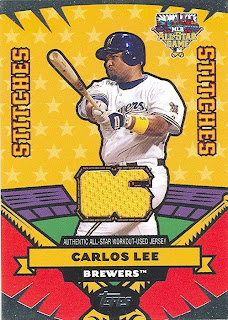 I'm not even sure what set this came from. I'm pretty sure I've read a blog where someone was making fun of it, I just can't remember where.

I really liked the '06 Highlights and Updates mainly because of the cartoons on the back. 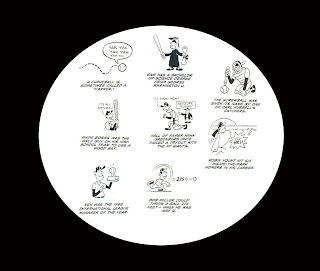 and of course the random inserts. 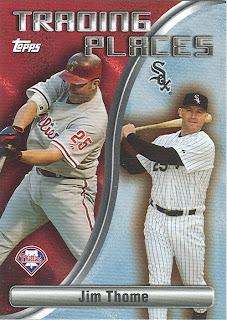 I bought a ton of these cards hoping to get more inserts like these Mickey Mantle Home Run cards. 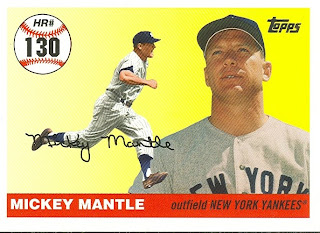 From the looks of the 5 or 6 cards I have that the Kansas City A's were the recipient of a lot of Mantle's home runs in that era. I kind of like the backs more than the front. 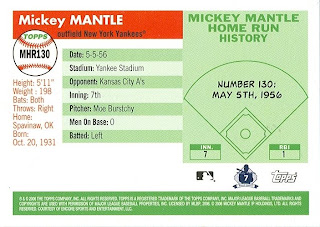 Even so, I would rather have the MM Home Run inserts instead of this crap: 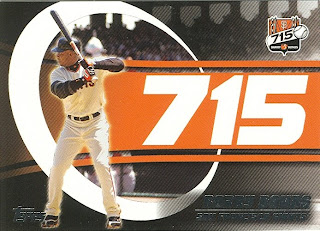 If anybody out there wants these, let me know. I have 4 or 5 of these Bonds cards needing a home.

I wish I would have known about these Rookie Debut inserts earlier though. These are much nice looking cards. 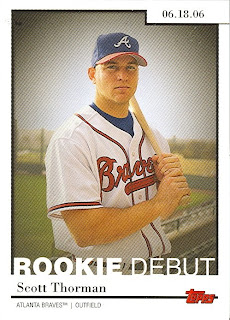 I think they went a little overboard with the vignetting filter, but anyway it's nice to me.

I have no idea about the checklist on these old packs so I never no what they are or when they'll show up. 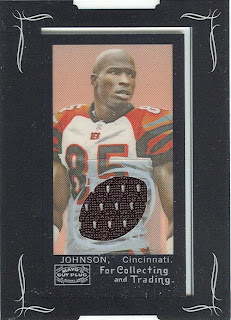 I like this Chad Johnson card. I was damaged on the lower right corner though. The front was a little separated from the
back of the card. I have a feeling that since it's an '08 card Topps isn't going to replace it though.

This Juan Encarnacion card includes a game worn relic from some MLB game, just not sure which game or who wore it. 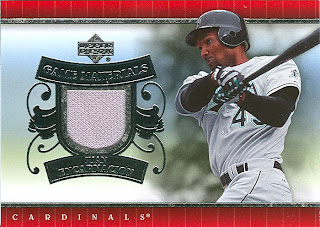 I really like that it has a wrinkle in the fabric. It must be really "game worn" then. It's a really thick card, too big to fit in a toploader. 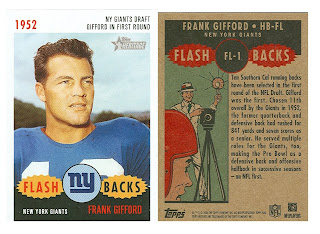 A cool pickup was this Frank Gifford card. It's from the 2006 football Heritage line. I guess the bottom of the card is "miscut" in an attempt to seem more vintage?

A got a few "big heads" from '07 Goudey. I was trying so hard to get some these. 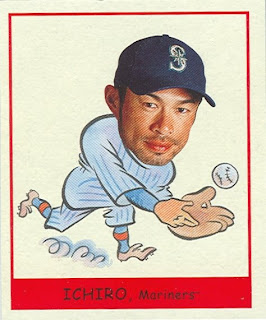 This is not an insert, but still one of the best cards I've seen in a while is this one though. 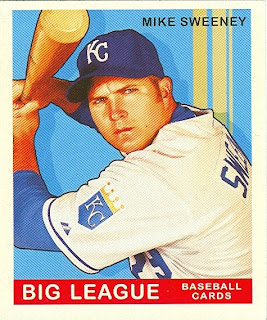 I think Mike Sweeney has become my favorite MLB player after looking at this card. This would be the best take on a "game face" expression on a card that I've seen. Hilarious. I like that someone could be so un-self conscious to do this for their card. I also don't mind the horrible "shadow" on the wall behind him.

All in all it was fun learning experience to buy random packs. Being a new collector I'm really addicted to the Walmart and Target repacks. They provide a nice diversion while I try to finish up the 2009 A&G.
Posted by Jeremy at 11:27 PM