Like most collectors I have a fondness for the mini cards. They come in all sizes, but the "standard" mini card like the ones in A&G are my favorite, because I like the thinness of those cards.

I did notice however, that some of the cards aren't just cropped versions of the base set.

Here is a John Maine base and mini card from this years set. 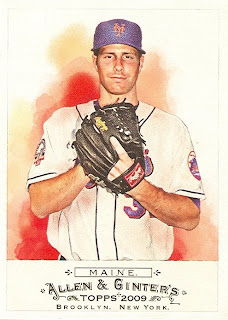 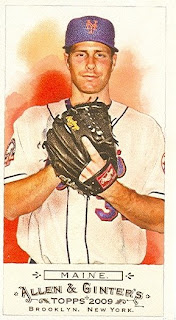 This is pretty straight forward crop. He's facing the camera in a posed shot and the designers just centered him in both the base and mini versions.
Here is another example. Pretty straightforward. 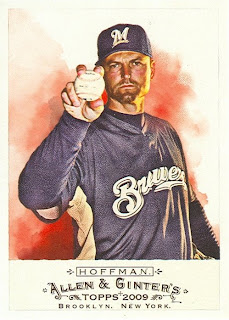 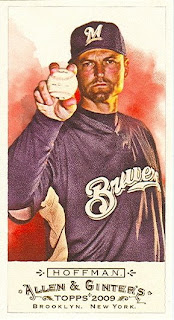 Guy looks like he's standing in a forest fire. Look at the bright yellow light on his face. Put down the ball and grab a fire hose.

I don't have that many minis yet, but I'm assuming that most of them are like this.

This particular card is one that doesn't follow the centered crop theme. 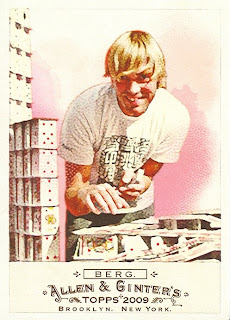 It's the Bryan Berg card. You know the house of cards guy?

Anyway I noticed that in the mini you can actually see more of the scene surrounding Bryan than you can in the base card. 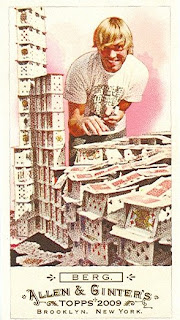 The mini is actually a better card for him because it shows more of why he's famous in the first place, which is the card building thing. It's like so much more nicer than his base card. The base card is basically just a creepy guy grinning at you.

The black bordered vertical cards are really interesting too. 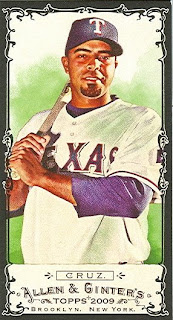 I think this guy may have played last year in OKC for the Redhawks. The Redhawks are the AAA team for the Rangers. I'm too lazy to look it up though.

You can see here why the border seems to work better for a vertical shot.

In this closeup you can see that the border is composed of two parts. One is the main thick border around the outside of the card and the other is a little thin piece parallel to the thin one.

You can see that the figure is shown behind the frame, so it gives a little more depth to the card. It's not like just a black border. It's a black border with an extra dimension to it. Or at least it seems that way to me. 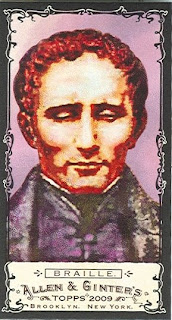 The black border for this subject is interesting because of the fact that he's blind. It seems to have a special meaning for the card than just a parallel gimic. 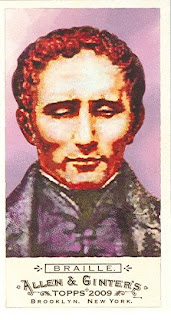 It seems to fit better than this regular bordered mini.