Joe from Priceless Pursuit sent over a few football cards to me today which was really nice of him.

I have a tendency to spend a lot of my free time checking out the various card collecting blogs and I noticed he was giving away free cards. Cool!! Free cards? Sign me up.

He promised to send me some Packers cards as well as "some guy in an OU uniform". Okay well "some guy" happened to be Cedric Jones who played for OU during one of the dark times in our program. During the mid to late '90's we had the unholy coaching trinity of Gibbs, Schnellenberger and Blake. Actually out of the three Gibbs was the best coach, but happened to receive the blunt of fans anger.

I remember Cedric because he was a one of the players to shine during that time. 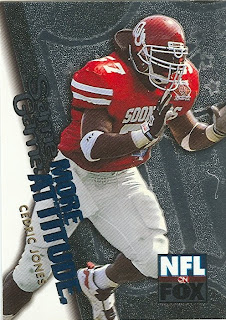 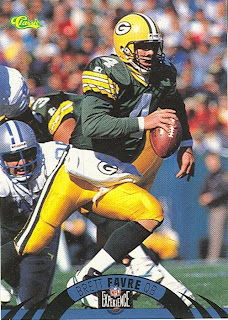 A couple of Favre running and dropping back to pass. Favre was one of the few players I looked up to and who I made the effort to check out the NFL instead of just watching college football. 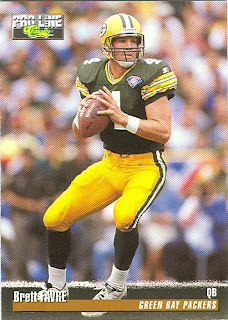 I remember one of the first games I saw him play was a Monday night game and he threw the ball like 80 yards from sideline to sideline. A perfect strike to the receiver. Okay, maybe it was like 15 yards and the receiver bobbled it a little and their was an instant replay to see if he caught it or not, but anyway the damage was done, I was a Favre fan.

It's so sad that now he's turned into such a douche. I mean every year he does this crap now. I don't mind a guy wanting to keep playing and if teams are willing to pay money for an aging quarterback to help them out, then why not? I still like to watch him play. I'm just not sure that he should treat his future "team mates" with such disrespect by not showing up for training camp. I feel like maybe he should just let people know his intentions on returning to the NFL. Probably didn't handle the two or three years of being so wishy washy on his retirement plans with the Packers the best way.

In happier times, I.E. his superbowl winning heyday, one of his favorite receivers was Sterling Sharpe. 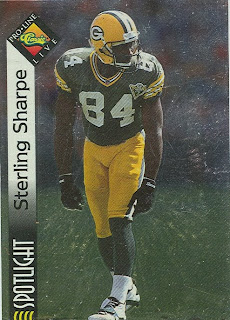 In 1992 Sharpe led the NFL in receptions, receiving touchdowns and receiving yards. 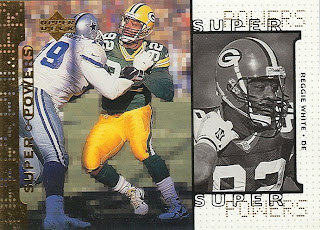 I believe he passed away Christmas day 5 years ago? I'm not sure on the year, but I remember being home with my family for Christmas when I heard that he had a heart attack.

This has to be the best card he sent me. He personalized it for me. 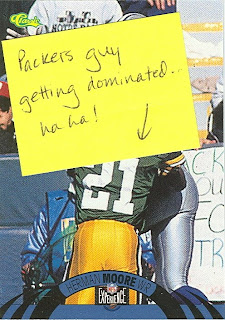 So funny! Good way to lighten the mood with all the depressing topics.
This is what it looks like without the note. 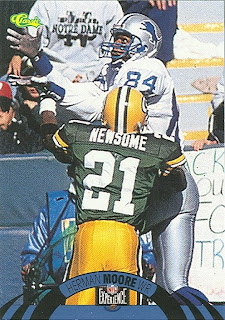 If anybody hasn't been by to check out Priceless Pursuit, please do, it's a great blog.
I need to get on the ball and send him some Yankees cards.
Posted by Jeremy at 10:28 PM