Another new product from Topps I was looking forward to was the Magic Football set.
After buying a retail blaster and a few retail packs, I'm still wondering exactly what this set is. I think it's supposed to be current NFL players in their college uniforms, but they don't really identify which NFL team they're currently on. This is confusing for me as I don't really follow the NFL that much and I'm assuming for the NFL fan that doesn't follow the college game that they wouldn't have much interest in seeing random players in their college uniform.

In the case of a favorite team or player it would be fine, because they would be familiar with the roster, but again I think the inclusion of their NFL team affiliation on the back would be helpful. 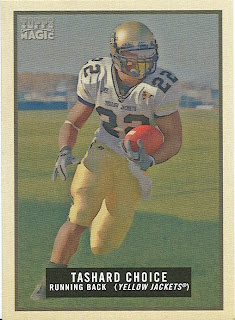 Since I mostly follow the college game it seems like it might be a cool set to collect, but I was sad to see only 5 OU players included in the set. I know there's more OU players currently playing in the NFL so I'm kind of confused as to who gets included and who isnt' included. The base set is paralleled with minis, black minis and autograph cards. 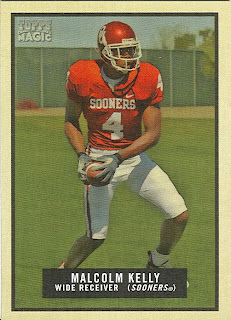 Peterson's also included in an All-American insert so that's something I guess. Maybe I'll just try to collect the team set and forget about the whole set. 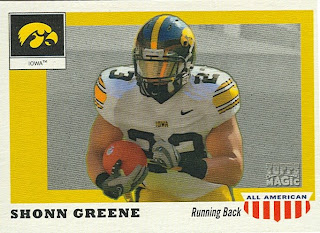 Here's an example of the ALL-American set featuring Shon Greene from Iowa. I was a little late getting on the Shon Greene train. I was a Javon Ringer fan, but his production seemed to drop off a bit down the stretch. Halfway through the season the talking heads were all over Greene and what a good back he was. Once the talking heads get started they're like a school of fish following one story line till the end of the season. 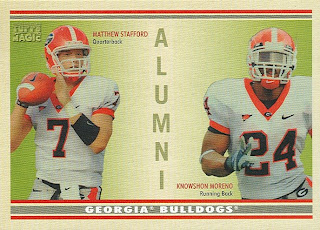 This is perfect for college FB fans, it's two recent college players from the same school. Easy for an old man like myself to remember who they were. Still would be nice if they mentioned on the back which team drafted them.

I really hate to see crap inserts like this. 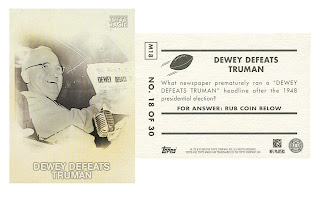 I only pulled a couple of doubles and this was one of them. I have a feeling a lot of these are going to find their way into card packs. Some of them are football related, and unfortunately some aren't. 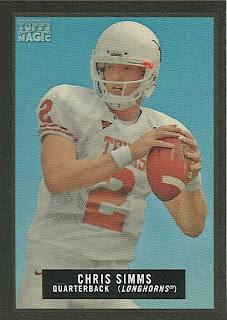 A black bordered mini. Zzzzzziiiiiing!!! That's the sound of me flipping this card south of the Red River into land of the asterisks . Maybe somebody else will enjoy that one.

The minis are cool. They're more squared shaped, rather than rectangular shaped. 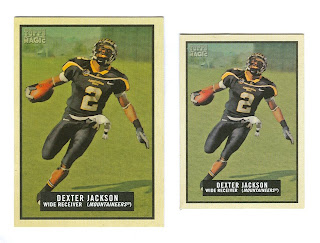 Here is a side by side comparison of a base card and mini.

They have a variety of older retired players as well as rookies and random dudes. 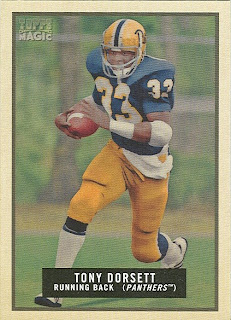 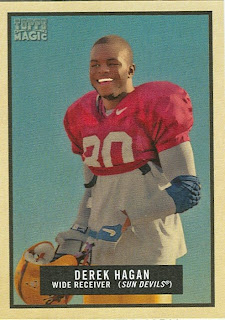 The funny thing about these cards is that they do look better as scans. Most of the time you'll read "this scan doesn't do this card justice." actually these are the exception, I think they look better as scans. They're still nice looking in a weird way. Some have solid color backgrounds, others have scenery behind the player. The pastoral backgrounds in some of the cards are nice. In the OU cards I know that they definitely resemble parts of our campus. The Malcolm Kelly card looks to have been taken from the practice field south of the stadium. The AD cards looks to be from the rugby field on south campus where the team occasionally scrimmages and practices.

Sometimes the background looks a little out of place to me. 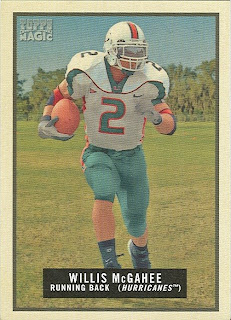 This background doesn't scream Coral Gables to me. The few times I was in Miami, I didn't see any Oak trees, mostly palm trees. Actually I spent most of my two trips to Miami with my hands over my eyes trying not to watch our team get beat in National Championship games. But I don't have to worry now, because those losses as well as a few other have been included in the Magic Thrill Insert set. YAYY!!

The Magic Thrill Inserts should be renamed the "Oklahoma Bowl Fail Insert set". Out of the 20 cards in this set, three of them are of OU's bowl loses. Sad, very sad.
Yikes!!

Of course, the Magic in Magic Football refers to the trivia questions on the back of the card. 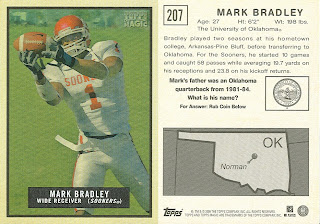 Here's a better one: Mark Bradley was converted from defensive back to wide receiver. He scored his first time touching the ball three different ways. What were they?

An example would be: "His first career reception." (That's an easy, but incorrect guess.) He scored on his 5th reception.

Anybody with enough free time could probably google it. Anybody who feels like answering the question first in the comments section will get a package of cards from their favorite football team. If they prefer baseball that's cool too. I'll round up some baseball stuff for them.


On a positive note, I only pulled a few doubles and that was only because of the two loose packs I purchased separately. It doesn't matter much to me at this point, because I'm not collecting the whole set, as soon as I get my few Sooner cards, I'm done. They do look a lot better to me than the 08 Mayo set though. Overall despite my negativity, I actually like the set as a whole. I just don't think there's enough in the set for me to want to collect it.
Posted by Jeremy at 2:16 PM

Nice article, Jeremy. I am a vintage football card collector, and I'm intrigued by these cards. I was considering buying some, but some of the things you mentioned have turned me off: the inserts, the retired players, etc. The cards look cool, but I don't go for the gimicky stuff. If it were a straightforward college set like the original, or if it were just a single set featuring current pro players in their college uniforms, I would be more apt to pick some up.

Thanks for the comment and the link to your site. I've actually been by there checking out all the older OU players. Lots of great stuff. If you're not a fan of Michigan, USC or Texas their might not be a lot for you to collect in the '09 Magic series. Their are more than a few colleges with little representation in that series in my opinion.